From Internet Movie Firearms Database - Guns in Movies, TV and Video Games
(Redirected from The Alamo (2004))
Jump to navigation Jump to search 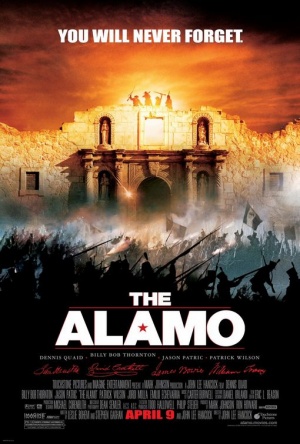 The Alamo is a 2004 historical drama directed by John Lee Hancock and based on the legendary 13-day siege of the Alamo Mission in what is modern day San Antonio, Texas. The battle was not strategically important, but was pivotal in uniting the resolve of Texans in the Texas Revolution of 1835-1836 (in which Texas declared itself an independent Republic and kicked out governmental influences from Mexico). Despite the fact the the Mexican Army was fighting the Republic of Texas, most people confuse this campaign with the Mexican-American War of the 1840s.

The following weapons were used in the film The Alamo:

Davy Crockett (Billy Bob Thornton) most notably uses a Kentucky/Pennsylvania long rifle during his attempted shot at Santa Anna (Emilio Echevarría) but he supposedly misses due to the wind. Though many people believe that Kentucky long rifles were the norm, nearly all of the defenders carried a mish mash of whatever weapon was available.

This surplus French gun was commonly used by the defenders of the Alamo. The Charleville Musket went through a series of modifications since its inception and all variants found their way to America somehow. However, it is difficult to see which year pattern is being used in the film, since there are no closeups of the pan & frizzen side of the gun. For the sake of historical accuracy, the Model 1766 French Charleville Infantry Musket was the most common Charleville seen at the siege.

An Alamo Defender fires a Charleville 1766.

Gen. Sam Houston (Dennis Quaid) and Lt. Col. William B. Travis (Patrick Wilson) keep Flintlock pistols as their sidearms. Col. James Bowie (Jason Patric) is given two flintlock pistols when he is too sick and stuck in bed.

Lt. Col. William B. Travis (Patrick Wilson) and Col. James Bowie (Jason Patric) each carry Double Barreled Flintlock shotguns throughout the film. They are mostly seen strapped on their backs but Travis is seen most clearly when he shoots a charging Mexican soldier coming at Crockett (Billy Bob Thornton). Jim Bowie assembles his shotgun during the final battle of the Alamo, he uses it to shoot the Mexican soldiers coming in before they bayonet him.

The Mexican Army under the command of General Santa Anna use the .75 caliberBrown Bess Flintlock Musket, which was the standard issue long gun of the Mexican Army of the time.

Another rifle used by Lt. Col. William B. Travis (Patrick Wilson) on the wall is the British Baker Rifle.

Another rifle used by Lt. Col. William B. Travis (Patrick Wilson) on the wall is the British Baker Rifle.

Seen are some vintage 1795 Springfield muskets (from the War of 1812) used as secondary weapons.

The Mexicans utilize some kind of a multibarrel weapon system to fire signal flares during the night assault. The flares were added as special effects during production. There were actually flintlock flare guns by at least the 18th century and probably other delivery systems for flares, however, according to Mexican military archives, the Mexican artillery at Alamo consisted of two four-pounder cannons, two six-pounder cannons, two eight-pounder cannons, and two six-and-a-half inch howitzers. The presence of the multibarrel weapon as depicted in the movie appears to be artistic license.