As the movie was filmed entirely using marionettes, all firearms used are purpose-built plastic props. However, the creators seem to have been inspired by real-life firearms used in popular action movies so most weapons used have a good degree of details. For this reason, when a certain gun is described below as e.g. ‘M16’ it should be read ‘inspired by M16’.

The following weapons were used in the animated film Team America: World Police:

Members of Team America use a M1911A1-type pistol with target sights as their secondary weapon. It is also seen handled by “Kim Jong Il” and Spottswoode, the leader of Team America. It is probably an Auto-Ordnance M1911A1 due to the slanted grooves on the slide. 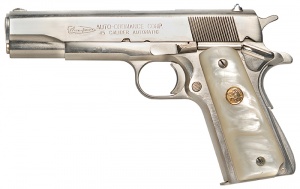 Spottswoode holding Gary at gunpoint at the Team America HQ, note the small compensator on the Auto-Ordnance M1911A1.

Chris holding the Auto-Ordnance M1911A1 as he and Gary make their way through Kim Jong Il’s palace in the finale.

The Heckler & Koch MP5A5 is the main weapon of choice for the American actors during the final shoot-out at the peace conference at Kim Jong Il’s palace. 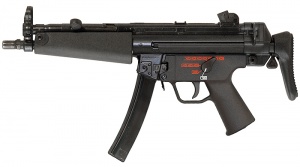 Another American actor to face Team America is “Liv Tyler” holding her Heckler & Koch MP5A5 with her left hand dangerously close to the barrel.

Gary is armed with a pair of Heckler & Koch MP5KA4’s, mounted in shoulder holsters. Most of the time, he is seen dual-wielding them with deadly efficiency, not bad for somebody who just learned to shoot a few days earlier… 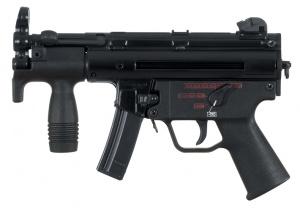 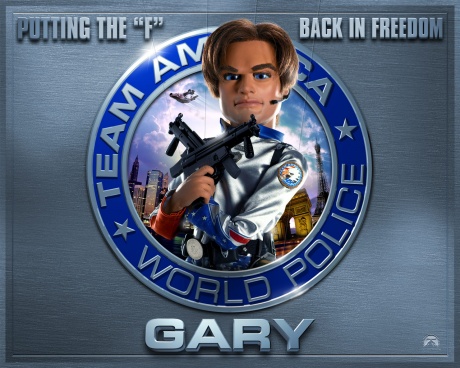 Gary disposing of some palace guards, his crossed-arms stance with the Heckler & Koch MP5K reminiscent of Keanu Reeves in The Matrix.

A good view of one of Gary’s Heckler & Koch MP5KA4’s as he is attacked by “Tim Robbins”. Note that from up close the fire selector is just a bunch of random red dots.

Gary’s Heckler & Koch MP5KA4’s are well visible in the special shoulder holsters as he addresses a crowd at the peace conference.

During the opening scene in Paris, Carson carries a Heckler & Koch MP5K-PDW with stainless steel navy suppressor and some kind of scope. It also looks like he has two magazines taped together ‘jungle style’.

Carson making his way towards terrorists, note that his Heckler & Koch MP5K-PDW seems to have two magazines taped together.

The business end of Carson’s Heckler & Koch MP5K-PDW as he pops up in front of escaping terrorists.

Several terrorists as well as a few American actors at the Kim Jong Il hosted ‘peace conference’ carry the IMI Uzi during fights with Team America.

Several terrorists can be seen armed with Uzi’s during the shootout with Team America in Egypt.

”Ethan Hawke” with an Uzi as he searches for Team America members in the hallways of Kim Jong Il’s palace.

Gary is confronted by an Uzi-wielding “Susan Sarandon” during the final shootout at the palace.

Lisa carries a Blaser R93 Tactical sniper rifle but she’s never seen firing it. This rifle is equipped with a 10-shot magazine and the distinct muzzle brake of its successor the Blaser R93 LRS2.

Lisa disembarking from the Team Amercia helicopter, note the characteristic receiver and bottom section of the stock of the Blaser R93 Tactical.

Lisa (left) as she and Sarah are guarding the front door of a terrorist hide-out, note that her bipod seems to have fallen off as opposed to above screenshot.

Several terrorists are seen carrying the Chinese SKS rifle. One of the differences that set it apart from the original Russian model is the spike-bayonet that is clearly seen in below screenshots.

The terrorist on the right is holding a Chinese SKS rifle, the distinctive spike-bayonet and the slanted magazine are well visible.

As Gary is talking to two terrorists in their hide-out in Egypt, there’s a detailed view of the spike-bayonet and barrel of the Chinese SKS rifle.

In the scene at the terrorist hide-out in Egypt, one terrorist is seen with a Zastava M76 on his back. The rifle can be identified by the long barrel and the massive wooden hand guard with three vent holes.

Just an average afternoon at a terrorist’s bar; lots of guns and a belly dancer. Note that the front sight of the Zastava M76 appears to be mounted up-side down!

During the opening shoot-out in Paris, one terrorist is seen armed with an AIM assault rifle, easily recognizable by the wooden vertical foregrip under the handguard.

A terrorist holding up Chris, his left hand clearly on the wooden vertical foregrip of an AIM.

After Chris challenges the terrorist to a martial arts fight, the distinctice lines of the terrorist’s AIM can be seen on the right.

An unlucky terrorist during the Paris mission handles an AIMR, recognizable by the stubby front section with shortened barrel plus the front sight being attached to the gas pipe.

An AIMR-wielding terrorist meets his end in a Parisian fountain, note the typical front section of his rifle.

The AKM is seen handled in many scenes by members of all sides, most prominently by guards in Kim Jong Il’s palace and in one notable scene, by Kim Jong Il himself.

Two guards to Kim Jong Il stand at guard with AKM’s next to the globe with pin-sized missiles indicating the locations of planned terrorist attacks.

A nice shot of Chris with an AKM at Kim Jong Il’s palace. Note the AKM details such as the slant compensator on the tip of the barrel and the AKM typical receiver.

“Tim Robbins” meeting his end with an AKM in his right hand. A good view of the slant compensator.

With an angry look on his face, “Kim Jong Il” decides to take matters in his own hand and starts shooting participants at the peace (…) conference with his AKM.

Throughout the movie, most terrorists carry an AKMS as their weapon of choice. Both the regular version, as well as the version with shortened barrel is seen used.

Two terrorists during the Paris mission, the one on the right holding an AKMS with two magazines taped together ‘jungle style’.

The same terrorist as above, now taking cover near a bakery. Note the improvised way the two magazines are taped together.

A good view of a short-barrelled AKMS being carried by the terrorist on the left, his rifle actually being very detailed for an animated movie.

Three heavily-armed terrorists in the Cairo hide-out, the one on the right carrying an AKMS. Note what appears to be a green hand grenade in the fruit bowl (…) on their table.

During the raid on Kim Jong Il’s palace, Team America encounters “George Clooney” shooting at them with a short-barrelled AKMS.

Another actor confronting Team America with an AKMS is “Sean Penn”, while on the left “Danny Glover” joins the shoot-out with a generic revolver.

Gary can be seen training at a shooting range with some kind of hybrid M16 showing a muzzle flash indicating a 3-prong flash hider but closer inspection reveals an A1-style A1 "birdcage" flash hider.

If only our local gun range could look as neat, clean and well-illuminated as this facility…

Note the muzzle flash indicative of a 3-prong flash hider for an M16.

The same shot half a second later, without seemingly aiming Gary realizes an amazing score on full auto with his M16 (from the hip!).

During the Cairo raid, Joe ropes down from a Team America helicopter with an M4A1 with M203 grenade launcher. 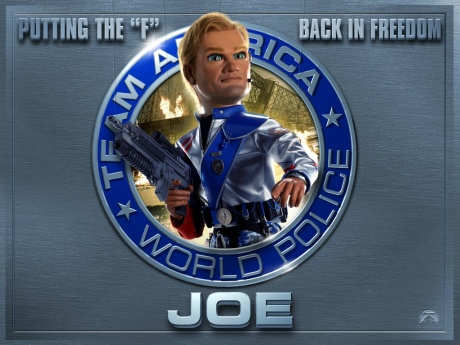 Joe roping down with his M4A1 with M203 grenade launcher, note the collapsible stock.

Chris can be seen carrying an M249-E2 SAW during the Cairo raid. It has some kind of scope and is fed from a 100-round Beta-C magazine; impossible but cool-looking nevertheless. 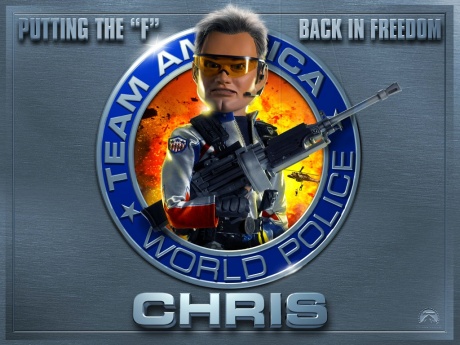 A good view of the business end of Chris’ M249-E2 SAW with a small scope on top.

The typical stock of the M249-E2 SAW is visible as well as the drum magazine.

Both the hand held as well as the wing-mounted version of the GE M134 Minigun make an appearance in this movie. 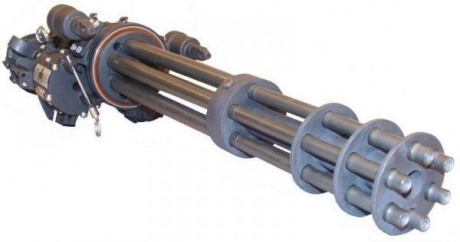 The GE M134 Minigun can be seen mounted on small wings on the sides of the Team America Blackhawk as it exits the Mount Rushmore base.

A GE M134 Minigun on the Team America helicopter spews death and destruction as they chase terrorists across the Middle East.

In this still the limitations of the look-alike GE M134 Minigun become painfully visible; no ammunition belt and 4 barrels instead of the standard 6. 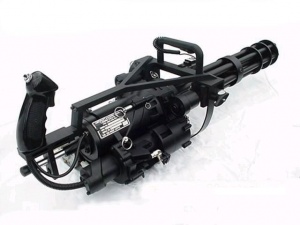 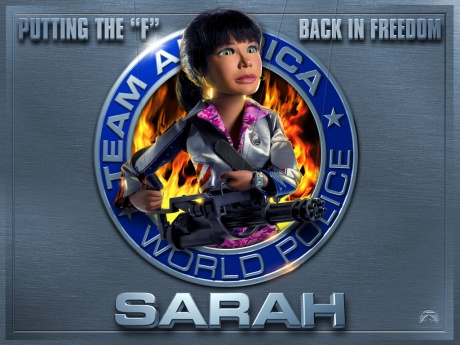 Sarah, on the right, holding her M134 Minigun as she and Lisa are scouting a terrorist hide-out in Egypt.

With her hand held M134 Minigun, Sarah decimates the insides of a bar in Cairo after their cover is blown.

Lisa can be seen carrying a Remington 870 Police during the mission in Paris. The shotgun has a Surefire dedicated forend weaponlight, pistol grip, synthetic stock and a heat shield. 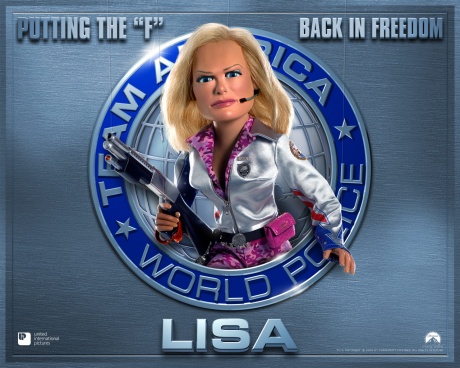 A good view of Lisa’s Remington 870 Police as she tends to Carson who’s been shot by a terrorist. Note the spare shells attached to the stock.

Chris peeking around the corner with his Winchester Model 1912 Riot Gun as Gary prepares to throw a grenade.

Chris and Gary checking the damage caused by a grenade. Note that the external extractor that seems to have been added for no reason.

Short barreled side by side shotgun

Gary carries a short barreled side by side shotgun in a holster on his hip, but he is never seen firing it.

A good view of the short stock of the short barreled side by side shotgun as Gary liberates Lisa from being held hostage by Kim Jong Il during the peace conference.

Lots of scoped RPG-7’s are seen lying around the terrorist hide-out in Cairo as Gary sneaks in to get information about upcoming attacks.

As Gary is being led away, two RPG-7’s are seen on the right as decoration material.

For no apparent reason, an RPG-7 can be seen standing against the bar of the terrorist hide-out.

During the mission in Paris, Joe uses a recoilless launcher that is based on the M136 AT4 launcher. It is fitted with Hollywood embellishments such as a pistol grip and a magazine with additional rockets.

An interesting screenshot showing Joe with preparing to fire the modified M136 AT4 launcher, seemingly using a night-vision scope in broad daylight…

Joe fires the M136 AT4 at fleeing terrorists, interestingly no rocket is loaded after his shot. Note the obvious pyrotechnics muzzle flashes.
Retrieved from "https://www.imfdb.org/index.php?title=Team_America:_World_Police&oldid=1480931"
Categories: