I remember that in one episode, FBI Agent Rosenfield told Cooper that he was shot with a Walther PPK (he also remarked that it was the same gun James Bond uses). I suppose we only have his word to go on.--Jackbel 02:28, 20 August 2011 (CDT)

In the episode where they arrest Jaques Renault, Andy is seen carrying a revolver I cannot identify. Anyone know what gun this is? It doesn't look like the Smith & Wesson Model 10 which Harry (on the right) carries. Dudster32 12:48, 15 August 2012 (CDT) 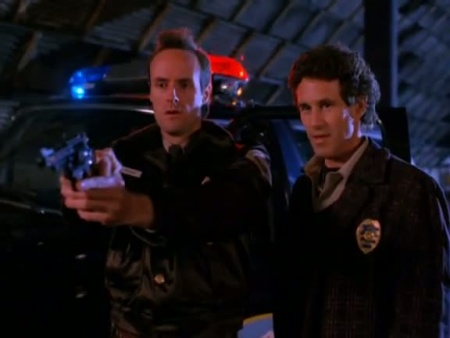 Definitely not a Model 10 given the large front ramp sight and adjustable rear sight. It's hard to tell details further than that to narrow it down, though. It doesn't look like it has a shroud on the ejector rod, but it looks bigger than a K-frame. Hard to say really with that image. StanTheMan (talk) 12:40, 22 November 2014 (EST) 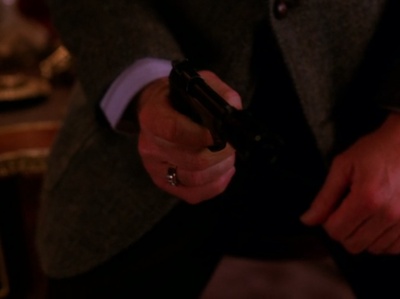 I had the same idea but it seems to me that this pistol doesn't perfectly match any compact Beretta due to the shape of the trigger guard. Greg-Z (talk) 13:08, 22 November 2014 (EST)

Are we actually sure on that one? The gun's overall size doesn't seem as big as an N-frame. The cylinder particularly doesn't look big enough compared to the trigger/trigger guard (compare with the gun image), the bore seems a bit small, the barrel itself a tad short, and the front ramp sight style doesn't match for N-frame snubs (but does match for some K-frames, particularly Model 19s/66s). All-told, I think this is more likely a Smith & Wesson Model 66 Snub. StanTheMan (talk) 14:23, 24 May 2016 (EDT)

Chantal and Hutch use a Para .45 handgun with a beavertail grip and a threaded barrel, sometimes with suppressor, a Remington 870 Witness Protection, and a Remington 700 outfitted with a Choate Super Sniper stock. The Polish accountant utilizes a Glock 18 fitted with 33-round extended magazines to kill Chantal and Hutch. Daria keeps a .45 revolver on her bedside table, according to the Cooper-Doppelganger. FBI agents Tammy Preston and Albert Rosenfield use a Walther P99 and a nickel-finish 1911 model, respectively. Bushnell Mullins loans out a ".32 snubnose" to a newly-awakened Dale Cooper, although it appears to be a Smith and Wesson Model 36 more than any .32 revolver. Unknown revolvers are seen in the hands of the Doppelganger and Ray when they attempt to shoot one another. Warden Murphy holds a .44 magnum, most likely a Smith and Wesson revolver. (Pictures and more details to come, please feel free to add on to this incomplete list.) Gaverielglock (talk) 12:50, 30 August 2017 (EDT)