Prop M136 AT4 with M16 lower receiver and AN/PVS-4 night-vision scope as seen in Transformers: Revenge of the Fallen and Transformers: Dark of the Moon

-She sure did. In the middle of a shopping mall! Good thing nobody noticed, because I think they call out the national guard for things like that. Pravda616

-I thought that they (Xander?) nicked it from the national guard in the first place. And it is Sunnydale - a girl with an anti-tank weapon is probably the least of their troubles... Spanner

In what way is having a rocket launcher that has to be thrown away after each use better than having a reloadable one? It seems like it'd be cheaper, lighter, and all around better to have one launcher and several rockets rather than several separate launchers. It just seems like a pointless waste of resources and rocket launchers to have to throw them away after just one use. Am I missing something here? Pyr0m4n14c (talk) 15:57, 11 December 2016 (EST)

Disposable rockets are cheaper to manufacture than than a reusable launcher, and they are easy to pick up and fire without worrying about whether the rocket was loaded properly. I think the idea is to have a bunch of infantrymen carry around disposable tubes instead of having one man carry a dedicated launcher (compare how the US Army had two-man bazooka teams back in WWII and Korea, whereas now a handful of soldiers will carry around M72s or AT4s).

Disposable launchers like the LAW and AT4 were designed to replace large anti-tank rifle grenades (since they're handier, more accurate, and easier to train with), so the idea is for every infantryman to carry one in addition to his standard rifle, with multi-shot launchers being restricted to dedicated anti-tank teams. Single-use launchers can also be made far less durable than multi-shot launchers, a throwaway launch tube can be made of flimsy (and thus extremely cheap) crap like fibreglass so it doesn't weigh much more than the rocket inside it, while a whole-body multi-shot launcher has to be made to survive multiple firings. By the time you've stuck a 5-pound rocket into your 15-pound RPG-7 you're at the weight of almost 4 LAWs.
It's rather like how soldiers carry a small single-shot grenade launcher under their rifle rather than all of them lugging around a full-size mortar. Evil Tim (talk) 19:57, 11 December 2016 (EST)

I see. I was under the impression that the weight and cost of reusable and disposable rocket launchers was comparable, so this explanation makes everything make a whole hell of a lot more sense. Thanks for the info. Pyr0m4n14c (talk) 20:27, 11 December 2016 (EST)

I have a few questions about some AT4 variants I've seen online: 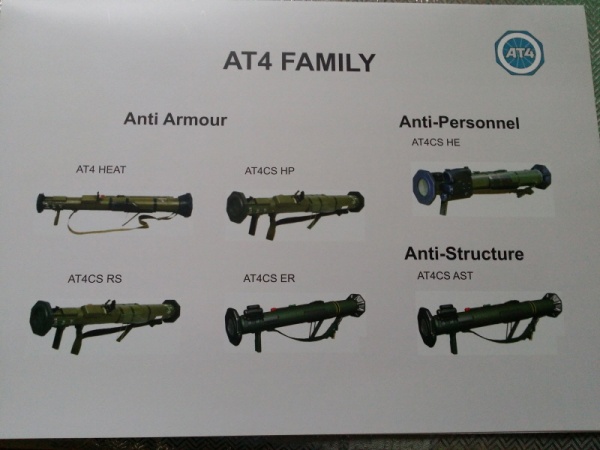 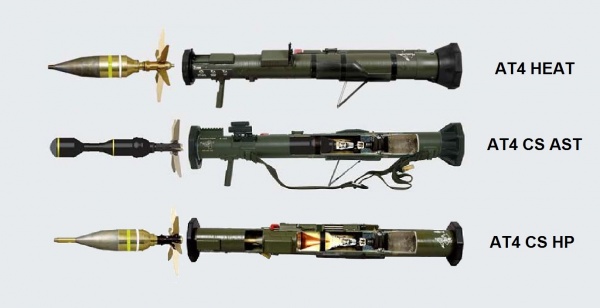 As regards the foregrip, seems the standard AT4 Saab Bofors Dynamics sells has that, and some time before 2010 the US Army totally stopped ordering the standard M136 AT4 (no foregrip) and started buying off the shelf AT4CS launchers and issuing them as M136s. Evil Tim (talk) 15:17, 28 January 2019 (EST)