It looks like the "Mausers" have external magazines. I thought all Mauser magazines were flush. --Funkychinaman 12:29, 26 May 2012 (CDT)

The Mausers are of two different models - note the bolt handle. None of them is Yugoslavian M48. Most likely the one with strait bolt handle is Spanish Mauser "Standart Model", and the other one is short rifle M93. BTW, it seems to me that the lever-action rifle is identified incorrect too - it is different from Winchester 1892 and looks more like Winchester Model 1894. Greg-Z 13:54, 26 May 2012 (CDT)

This is a misunderstanding: I have used as a template film Viva Maria and in there is a Yugoslavian model. I forgot to change it :)--Pandolfini 16:26, 26 May 2012 (CDT)

The bandits destroyed the armored wagon by the dynamite. 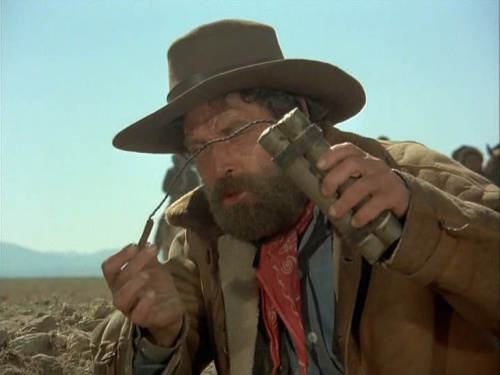 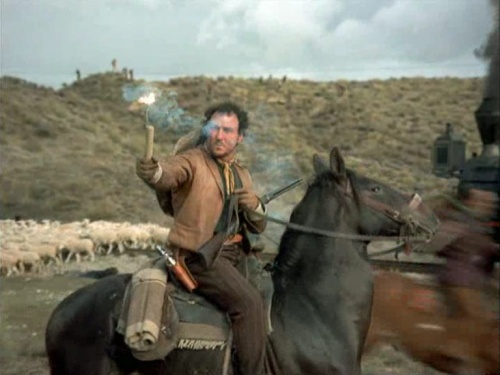 This film was widely distributed around the world simply as "Red Sun". The Foreign name in the parenthesis is if the film was released in the original title only or was never released with an English language title.MoviePropMaster2008 12:35, 26 May 2012 (CDT)

No, the Determining factor is what's in the RULE of IMFDB. Your link proves that the title is Red Sun so I am not sure what your problem is. I don't see why you're being so contrary by intentionally putting in posters with Foreign Titles on it and REMOVING the American one after I pointed out that this film qualifies to have it's American release title as the IMFDB title. MoviePropMaster2008 19:08, 26 May 2012 (CDT)

It's all right here. "When a film is an originally foreign film (even ones from English speaking nations like Canada, UK, Australia, New Zealand, etc.) the American Release Title is the official title on IMFDB." As you can see here the US title is Red Sun. --Funkychinaman 00:22, 27 May 2012 (CDT)

The sentence that "This film was widely distributed around the world simply as Red Sun" is a lie! Unless the term "whole world" identical to English speaks countries and against it in principle I protested. Posters I added below as an example of the various names under which the film was actually featured in the world. Only in my little country has two names! The first is the "Rudé slunce" (Red Sun) - but czech, no english!!![2], the second for DVD edition sounds "Rivalové pod rudým sluncem" (Rivals under the red sun) - [3].--Pandolfini 00:26, 27 May 2012 (CDT)

How many times can we say the same thing: Red Sun is the US title, and according to the rules, is thus the page name. It doesn't matter how many names it was released under, the US title is the only one that counts. --Funkychinaman 01:15, 27 May 2012 (CDT)

It's not about me, to be distinguished from similar-sounding English films and that there is certainly more is obvious. We therefore also used for the main title and the original name, nothings more.--Pandolfini 00:30, 27 May 2012 (CDT)

Regardless of how much you complain, we are still going to follow IMFDB rules on this one. This rant about IMFDB being "AmericanCentric" is an old argument, made by a few non English speaking members in the past. You sure put a lot of work into arguing against Mods :) I'd rather you put a little more effort into making sure your Gun IDs are correct. :) MoviePropMaster2008 02:35, 27 May 2012 (CDT) Because for "rules on this one"? No comprehend. Either for all or for none, right? Is a similar way so I redid also movie The 10th Victim whether the same rules. At the same time so I can give the English name for another film where his original name unbearably long and impossible to put it here :)--Pandolfini 07:16, 27 May 2012 (CDT)