Prop pictures are out!

IO9 posted a photo of the props from Looper that clearly shows the "futuristic shotgun" (pretty much a zip gun fashioned from a crude wooden handle and something that looks like an AR front) and the single-action revolver (which is not a Colt SAA - I can't tell what it is, some Taurus?). http://io9.com/5929101/why-joseph-gordon+levitt-has-the-crappiest-gun-in-looper

apperently loopers are at best entry level assassins the home made shotgun seems to reflect where they are. the guy to be whacked is already tied up it seems to use buckshot so you cannot miss apperantly there are "gat men" supervisors to the looper that use large calaber revolvers like the Magnum Research BFR that acutaly requiers skill to use unlike the scatter guns --Seekerdude (talk) 16:07, 25 September 2012 (EDT)

just saw the film, noticed some guns not listed

First off, excellent movie. Second off, just in case anyone was wondering, a few guns I noticed in the movie: Bruce Willis also used the Mateba Autorevolver, as well as an MP9-looking submachine gun breifly during a flashback. He used it to shoot at a car in a driveby. Maybe a TMP or something?

I was able to grab a shot off of an international trailer for the film but I can't make a clear ID. bunni (talk)

Young Joe had some type of single-barrel break-action derringer looking gun when escaping from his apartment. Noooo clue what it was, dark scene with a dark gun, but the shell casing he inserted into it looked like a .22.

I added what I believe was a shot of Joe grabbing this pistol from a French trailer but it doesn't look like the break-action derringer you're describing, were there two guns in that scene? bunni (talk)

I *think* so, if we're thinking about the same scene. The part where he falls off of the ladder at the fire escape to his apartment. He loads up something that looks break-action (but again, small gun in a dark shot), loads it with a bullet, and then runs out the fire escape, and he fires one shot at the Beretta Gat Man. If I remember correctly, which is always a crapshoot knowing me. --Sparticus (talk) 00:41, 3 October 2012 (EDT) 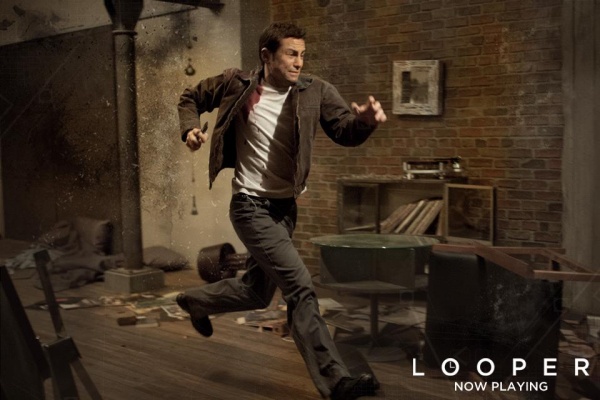 It is pretty much impossible to tell from that shot, but my best guess would be a High Standard Derringer based on the genreral size/shape and the fact that it appears to have some kind of spur between his index and middle finger. --commando552 (talk) 19:27, 5 October 2012 (EDT)

The Doctor had some sort of revolver that definately was not a BFR during the climax of the film. A python, I think? Again, it's only on screen for a second.

I tried to grab this shot but it's just too blurry in the trailers to make any ID. bunni (talk)

Old Joe had an MP5 after his P90's ran out of ammunition. You can see it when Abe is looking through a security monitor and then again when Joe bursts through a door.

Yup, if I remember correctly it had a full stock too - but the magazine and well looked too large to be an MP5A2? I actually thought at the time that it was an HK33 variant, maybe a HK53 could be confused for an MP5? It was shown only briefly and even then through a black and white 'security cam'. Does such a thing as an HK53 with an MP5A2 stock exist, HK53A2? bunni (talk)

Hmm, did a bit of googling, I believe it looked something like this.

One of the thugs accompanying Kid Blue at Joe's apartment has a Beretta of some sort, which seems odd considering everyone else's love for BFR's.

The final Gat Man to get killed at the club by Joe with the p90 is carrying an AR-15 pistol variant. You get a good look at it when the guy dies and the gun falls besides him.

These particular Gat man that you're talking about, I think he's carring an Rocky Mountains Arms Patriot Pistol. He never shoot it, but the weapon is clearly seen after he was waxed. Rodrigo79

Joe drives by a guy who has I *think* a Mossberg shotgun that he uses to kill a looter.

I added an image from the international trailer - but I can't make it out at that angle. It appears to be pistol gripped. It also has a large rear sight 'fin' like a Mossberg. bunni (talk)

Just trying to help, hope anyone on the website finds this useful once this movie comes out on home video. 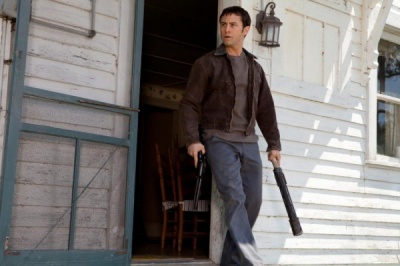 Joe holds a "Blunderbuss" and the BFR in a production still. 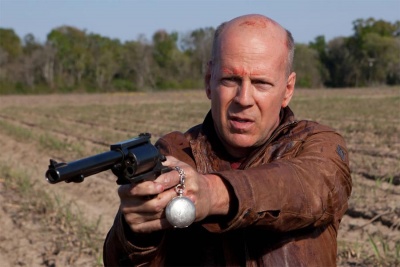 Old Joe aims the BFR in a production still. 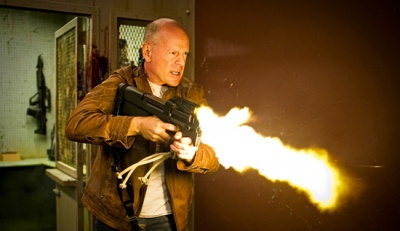 Production image of Joe as he blasts away with a P90 TR. 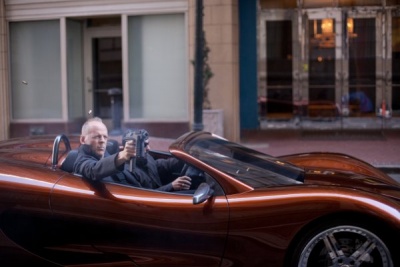 Old Joe fires a MP-9 in a publicity still.

From the IGN featurette.

Two of Joe's men hold up a convenience store in Shanghai in a deleted scene.

They could be toy guns for all we know.

Anyone care to take a crack at identifying this taser? It's an old dustbuster type, with built in laser.

Looks like it could be one of the old Model 34000 "Power Handle" Tasers:

The laser is supposed to be up and the trigger button pressed with your thumb. However from the look of it you could just as easily have it the other way up and press the trigger with your index finger, so I don't think it is necessarily a mistake. --commando552 (talk) 12:08, 15 May 2013 (EDT)

I see it all over the internet that the blunderbuss is a pump-action weapon and that the little metal bit is the pump. Yet when Young Joe realizes that his latest assignment is himself, he fires once - then immediately breaches the blunderbuss to reload. If the weapon could be fired in succession, then Old Joe shouldn't have had time to toss a gold bar at him and then leap up to punch him. So either Young Joe is a complete idiot and his weapon can somehow hold multiple shells and he just loaded one, or the weapon is supposed to be single shot and he fires it multiple times in at least one scene. (Also love the completely superfluous rails on it. What would you even attach to it, other than a shell carrier?) Atypicaloracle (talk) 03:27, 23 July 2013 (EDT)

If you see here, he's clearly pumping and firing multiple times. And it could be he only loaded one shell (shell?) because he's only needed one in the past to close out each loop. I think you'll go crazy though if you think about the blunderbuss too hard. Nothing about it makes sense. --Funkychinaman (talk) 10:29, 23 July 2013 (EDT)

So it's a breach-loading pump-action shotgun. Seriously why not just model it on a M79 or stand-alone M203 or something, loaded with the M576 40mm buckshot instead of some kind of insane, nonsensical repeater that apparently stores its ammunition extra-dimensionally. Or maybe the shells (?) are stored IN THE FUTURE. I mean, the time travel in this movie is already nonsensical so we might as well go with that. And yea, we don't even know if it's shells, since while it clearly acts like a shotgun, it never actually ejects anything when breached and it's not shown being loaded. In fact, he breaches it but doesn't have another shell in his hand or anything.I guess it could be loaded with a bunch of caseless rounds which are electrically primed and fired at once, loaded in sort of a superposed cylinder, though that doesn't explain what the pump is for. Atypicaloracle (talk) 16:48, 23 September 2013 (EDT)

My guess is that it was never intended as a repeater when it was designed and made and was just meant to be a big, crude, single shot shotgun. If you look at the "pump", it is attached to a MIL-STD-1913 rail rather than anything that actually moves, and looks more like it is a rail protector like you often see on modern railed handguards when accessories aren't attached. I think they just pretend that it is pump action for story purposes as it needed to be for that particular scene, as to my eye when he is pumping it the pump doesn't actually move. He kind of just rubs it back and forth with his hand and dramatically throws the gun around and the sound effect does the rest. Just to add, you "break" a shotgun, not "breach" it. In the context of guns breach is a noun, not a verb. --commando552 (talk) 18:01, 23 September 2013 (EDT)

The way I see it, is the blunderbuss has an internal cylinder, like a revolver, in which the shells are loaded. The cylinder is rotated by the pump action on the bottom (which does just look like a silver rail cover). The cylinder is reach by breaking open the shotgun. I believe that he only had one shell loaded when Bruce Willis arrived because he had become complacent throughout all the jobs he's done as a Looper. Plus, it's been said in interviews that Loopers are the lowest men on the totem pole, they're pretty much fuck-ups. JakeX88