A word of advice to the original author(s), the descriptions of a weapon's use should be posted above the image of the gun, not below. I fixed the problem but thought I should state this for future reference.

I love this show, but see it hasnt been renewed or cancelled. when do you think we'll know if it will be back? 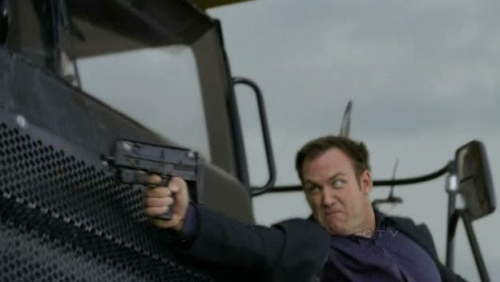 A mercenary aims his MP7 at Chance.

I don't know why they WOULDN'T have real MP7s. It looks like they're using the same armorers as Battlestar Galactica (as you can tell by the tricked out CX4 Storms from a previous episode) and they had real MP7s in BSG. --Funkychinaman 23:48, 24 April 2010 (UTC)

The rest of the MP7 look real, so this one could be a real MP7 but is dose look off. it might be the sights are removed.

The sights? How about the fact that, in proportion with the rest of the shot, it looks like someone dropped it in a compactor first? --Clutch 04:52, 25 April 2010 (UTC)

I don't think there's anything unique about this MP7. It has a 20-round mag and no sights, as someone else pointed out, but I don't think it's that different. Also, as Funkychinaman pointed out, we've already seen genuine MP7s in other productions that rented their weapons from Felcan Enterprises (the armorers on this show), so I don't know why they'd need to use a dressed-up MAC-11. -MT2008 19:46, 27 January 2011 (UTC) 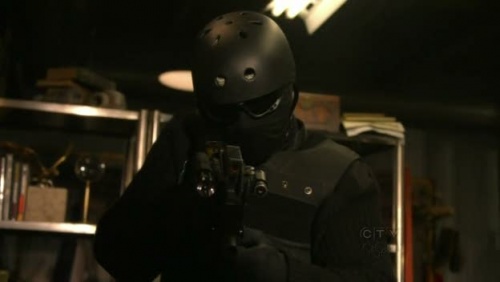 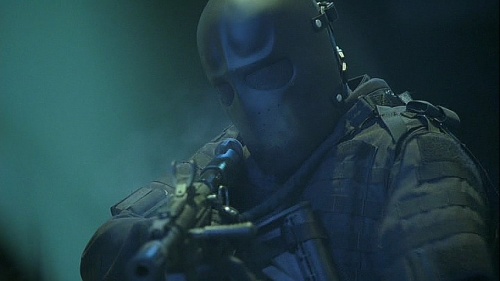 Is this a real life suit or just happen to use the same prop?

Why am I thinking of Army Of Two when i look at the bottom image? User:SeanWolf

In this episode winston gets out a folding stock shotgun and actually unfolds the stock and shoulders it before use, this was a nice touch. Never see it anymore. couldn't identify the shotgun though.

Does anybody know what kind of tactical light they had on that shotgun?

Was that 2 tone M&Ps that guerro took off the bad guys? Looks like hector carries one in the next episode too, and chance seems to have switched the walther for a custom 1911.

As far as the 1911 goes, I found two that could be it. Chance's has 3 front cocking serrations, and was stainless at beginng but in a closeup when he gave it to Ilsa it was black (could have been lighting). 1st is a Para Ord P-14/ hi cap and 2nd is a Para Ord LDA. It also could have been a custom kimber of some sort. the show is filmed in Canada, and para is canada comp. UPDATE: Just watched again (yay DVRs) and it was definitely black with silver barrel. It had a skeletonized hammer and traditional single action trigger. Sorry, no screencaps. Also, is there a para specialist out there? I thought i saw a four letter word starting with p on the top of the ejection port. ----JazzBlackBelt-- 01:21, 8 January 2011 (UTC)

Shape looks the same but color pattern was different, his seemed all stainless, the cocking serrations weren't black. Do you think this will replace his signature p99? And I believe the gun hector, guerro, and ilsa used was a 2 tone m&P.

When was his all stainless? When he gave it to ilsa it was black, and also at beginng of problem like maria. I hope it doesnt replace the p99. Its nice to see some diversity of guns on tv, but i think chance needs a p99. In the preview for next weeks opera episode, they showed a flash of chance whith a 92fs sliding down a rope. Also, search on the internet stealth s14-45, its a para that could be it. Hector definitely used m&ps, and i think his brother used a sig p225 or p226, it looked compact in ames' hands, but later in the helicopter it looked like a full size 226. Also, was the gun that guererro gave ames a beretta jetfire? Either that or a tomcat.----JazzBlackBelt-- 05:31, 9 January 2011 (UTC)

Hulu resolution is pretty bad so i may be missing something. 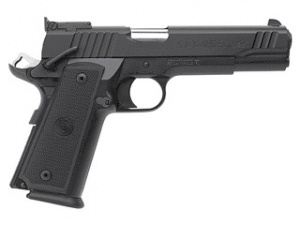 In Jericho he always seemed to have a good grip and trigger discipline. Strange that he would go from good to bad. --cool-breeze 18:43, 27 January 2011 (UTC) 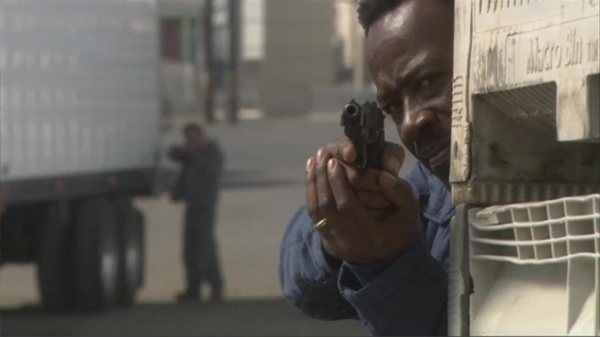 He uses the exact same cup-and-saucer grip throughout Jericho that he's used in this show. I also believe I remember him holding pistols the same way in some other movies and TV shows in which he's appeared. So I don't think he's gone from good to bad...his grip on almost any pistol he's ever handled is pretty much the same. -MT2008 19:42, 27 January 2011 (UTC)

I just watched "Cool Hand Guerrero" where Chance has a bad experience in a gun store, interesting thing is all the customers who are browsing suddenly turn and start shooting at him. I'm not an expert but I'm pretty sure they wouldnt keep all their guns loaded...

Every TV show is like that: You'll routinely see weapons being reused by different characters in many episodes. They don't have unlimited money to rent many different types of firearms, so of course you're gonna see the same guns often. What's really crazy to me is when I see the exact same weapon getting reused in many different movies or TV shows. The exact same "Beretta 93R" used in this show (which is actually a Beretta 92FS modified to look like a 93R) has been used in Viper, The Sentinel, Harsh Realm, Stargate SG-1, etc. -MT2008 23:21, 30 January 2011 (UTC)

With a bunch of tactical accessories and a scope...

Or shoot at hundreds of dollars worth of stuff just to stop a burglar stealing a few DVDs...

The episode "Imbroglio" contains numerous Dark Knight references. From the use of bad guys wearing masks to disguising hostages as gunmen and taping submachine guns on them. Not to mention both Batman and Human Target are based on DC Comics.

Some update worth doing

Not just yet. Most shows have tons of guns in each season, just like Human Target. But those shows have 6-8 seasons. I don't it is necessary until we get at least a season 3 (wishful thinking). Then other shows like NCIS haven't done it at all. It would be nice, but we would have lots of repeats and at the same time small pages.----JazzBlackBelt-- 12:17, 4 February 2011 (UTC)

Just watched the season one finale the hidden revolver is definatly a Smith 29, added it to the main page as the pics to confirm where already there--Captain Snikt 07:26, 4 February 2011 (UTC)

I had previously identified as well, as long as a year ago. For some reason someone moved it back to the unknown category. Also, wouldn't it be a 629, the stainless steel version? Because that doesn't look shiny enough to be nickel plated.----JazzBlackBelt-- 12:20, 4 February 2011 (UTC)

The most prominent gun in season 1, it was used by chance, various bad guys, side characters. Then in season 2 he gets a para 1911, and stops with his signature p99. But no secondary characters are even using it. Seems strange it just disappeared all together.

When he flashed it to ilsa, the handle was definitely not that of a p99. I think it is nice to see diversity of guns on tv, rather than everyone having glocks, but I think chance needs a P99. It just fits him. Although, the double stack para 1911 is nice as well.----JazzBlackBelt-- 04:57, 5 February 2011 (UTC)

Thought I would try to ID the unknown pistols. The first two I have no idea, but I am 99.9999% sure that the woman customer in gun world is using either a Taurus PT940 or a 945 with pink grips. I am leaning toward the PT940. Natalya's pistol confuses me. It looks like a Walther ppk or a SIG p230/p232, but she originally had it concealed in the back of a hairdryer. Both those pistols are too large, so I think it is a continuity error. Even in her hands it looks too large. I would love you guys input on these.----JazzBlackBelt-- 06:52, 6 February 2011 (UTC) 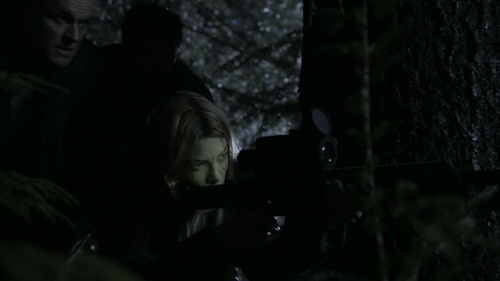 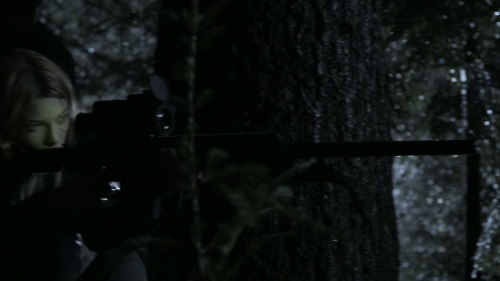