Talk:Army of Two: The 40th Day

The Mosin-Nagant 91-30 is in the game as the "Grand Pinger", and is the result of a *chan member getting really lucky in his trolling. It features a backwards detachable Dragunov Magazine. My friend actually designed it, while I put 10 serious designs in.-protoAuthor 22:11, 7 January 2010 (UTC)

I attempted to put a 'no effort' tag on this page since it's just a laundry list of guns with no screenshots, links, or info, but wasn't able to for some reason. I'm getting really tired of people making half-assed pages. If you're going to make a page, put forth some freaking effort! Orca1 9904 23:43, 7 January 2010 (UTC)

full pages with lots of pics and infotake ages to make. i just made black mesa: source and it took me an hour. although i didhave to upload all of the pics

Also keep in mind that this game isn't out yet, and we have no real solid info on the guns in the game aside from screenshots.

That gun will probably not be put in the main article for the same reason that the alien guns from District 9 were not put in. IMFDB has a policy regarding 'fantasy guns.' If the gun is not based on a real life working gun (I.E. the Morita rifle from Starship Troopers) then it shouldn't get put in the main article. Yes, true, it is based on about 5 different guns, I highly doubt that there is a working version of this gun. Here's the picture so that all of you can look on in disbelief: 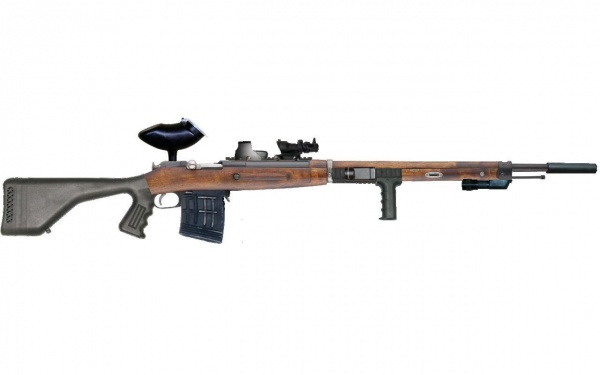 "Sniper Launcher"
I will briefly describe this weapon. From the looks of it they took the stock and grip from a shotgun and the rest from a Mosin-Nagant (dunno which one and don't care). The flash hinderer looks like one of those fake ones you see from time to time. It has a EOTECH Holosight mounted in front of a backward ACOG scope and a backwards mounted Druganov magazine and magazine release. It also has a backwards forward grip and what appears to be two backwards flashlight. The paint ball hopper that is located behind the bolt action is supposed to hold explosive pellets which somehow move in front of the bullet when loaded/selected, which I guess would work considering the bullets being loaded would be pointing towards the user anyway. This was chosen by the design team as one of two winners in a gun design contest. This is what you get when you have a lego with guns concept. The other gun selected as the winner is below, but is not stupid looking or impossible: 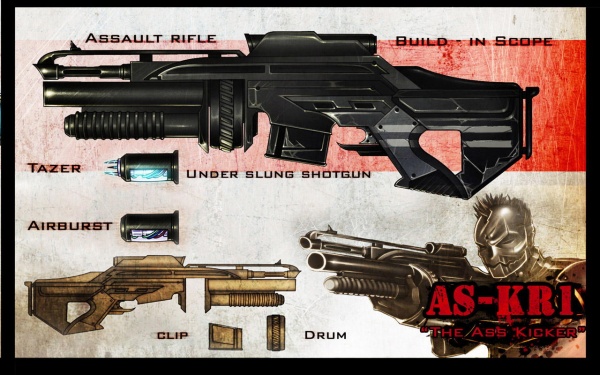 "AS-KR1" or "Ass Kicker"
It fires 7.62x39mm ammo and what is reported to be an underslung shotgun (a la masterkey system) which looks more like a 40mm MGL and is fed via the drum magazine. For more information on both guns you can go to http://www.armyoftwo.com/us/tag/weapon%20design%20contest, which is the official site for the announcement of the contest winners and where the pictures came from. --Gunkatas 05:07, 8 January 2010 (UTC)

the version of the grand pinger shown in the demo looks a little more reasonable. instead of the holosight and ACOG it has a standard scope, the grip is moved further up the barrel and is integrated into a realy small greanade launcher that somehow perfectly fits under the barrel. the paint ball hopper has been completely removed and the bolt has been switched to a mosin nagant sniper bolt.--68.18.154.114 23:18, 8 January 2010 (UTC)

If you go to the youtube video you can see the S8-Z "Grand Pinger" around the 1:08-1:09 mark (you will have to fast click on the pause/play button to step forward to it. It is after the M107 and before the SVD Dragunov) -Ranger01

I've dropped a message to the person who made this page. While currently there is little information on the game...I am planning on repeating what i did for the first Army of two. Right now we don't have much in game information so all that can be done is the pictures of known real life weapons. Rockwolf66 02:08, 8 January 2010 (UTC)

I don't know what whoever is responsible for Actually....its a glock 18, glock 18's come from the factory with two seventeen round magazines and as far as the selector switch, the earlier generations came without on on the slide. Just figured I'd let you know is talking about. I've never heard of select-fire Glock 18s without the selector switch on the slide. If there's no switch, then it's not an 18, it's another model (usually a 17) being incorrectly displayed as having select fire. Atypicaloracle 15:50, 17 June 2010 (UTC)

how to get the glock?

You gotta go through around a third of the game making only good moralty choices. BeardedHoplite 03:15, 9 February 2011 (UTC)

This page really needs some TLC

Its been about a year since any major changes has been done to it. I have found some other guns that aren't listed: Knight's Armament Masterkey Shotgun, M203 grenade launcher, GE M134 Minigun, an unknown flamethrower, and the grenades. -User:1morey April 16, 2011 11:36 AM (EST)

Is there a +1 round in the chamber in this game?

Hey there! I was hoping that people could post some of their favorite weapon builds and post them on this forum section. This can be done easily by PS3 users by going to the home screen under the photos option where you can take a screen cap of the weapon customization screen. One rule: Lets have it so the weapons are somewhat realistic in their build (i.e, a AK barrel on an M4 frame just doesnt look natural). Lets see what the community can make! User:Valant--A single bullet can change history (talk) 23:33, 10 March 2013 (EDT)

The prompt I placed before works for PS3 users, all they need to do is use flash drive to move pics to computer and presto! Im going to be trying it myself soon. User:Valant--A single bullet can change history (talk) 11:55, 11 March 2013 (EDT)

I was a bit disappointed too at first, but I realized that you just didn't use it that much. You have your primary weapon, you have your secondary weapon, where you can place another primary weapon, and you can pick up enemy weapons in this game. I found myself only using the pistols to get pistol-related achievements. --Funkychinaman (talk) 13:14, 11 March 2013 (EDT)