I grabbed some temporary caps off of Hulu from the pilot to spruce up the page. I don't think I'll be keeping up with this series though. --Funkychinaman 18:09, 10 February 2012 (CST)

Thanks for that. Make me feel like a a**hole.

I'm sorry, i tried to insert a better M4 pic. Can someone please make that change for me. You'll find the pic under the file name that is listed, its the one with the forward railguard and sight attachment--Coltmth 19:26, 10 February 2012 (CST)

I believe that Guy Hastings uses a standard Colt M1911 or a Colt Government Model [Cant find a decent pic, so identifying exact make/model is impossible]this is due the to original style Hammer, Safety and slide release but I'm sure it wasn't a Kimber Warrior. --BrokenBullet 14:11, 11 February 2012 (CST)

It's a little trickier now than it was a year ago since they updated their player. I use a program named FastStone Image Viewer, which has an option for capturing windows. Open the video in a pop-out window, and when you capture the window, you can't actually click on the video itself, otherwise the image will be obscured. Click AROUND the video, and then crop it. I hope that helps. --Funkychinaman 14:24, 12 February 2012 (CST)

Please note my fine firearm-identifying comrades that the San Francisco Police Department (SFPD) has never had "Detectives".They have always have, and still do, identify their plainclothes investigators as "Inspectors" Ex: Inspector Harry Callahan or Insp. Callahan. As a result title them as such.

This is Hollywood, BTW, so don't expect accuracy. —nkingman

Someone needs to tell the show's writers. The title "Detective" is incorrectly used throughout the show. It's bugged me since the pilot episode. -APS221

Can someone please look over episode 3 so that we can try to figure out what Madsen's B.U. Gun is and what kit nelson's revolver is?

Ok people, season 1 has ended. Lets try to get some more pics up and try to identify some guns. I have all season 1 episodes on iTunes. If u get the episodes in HD, it would help with the clarity. AS of right now, Fox does not have a plan for a second season, but the ratings hit an all time low with the season 1 finale, so hopes for a second season aren't high.--Coltmth 09:58, 28 March 2012 (CDT)

Worse series have had renewals...Kinda like this series as a bit of something different and intriguing --BrokenBullet 13:27, 28 March 2012 (CDT)

SERIES CANCELLED...... I am still going to edit this page and try to get it close to finalized and complete status. I would like some help. If u want to reach me

In the second episode a criminal uses a Winchester rifle to shoot people. The female detective Madsen deduces he's using the Winchester instead of M40 that the police think he uses. She says the rifles use same bullets. In my opinion this is a stupid statement and plot hole because the Winchester 70 was/is not available in 7.62x51mm NATO. Correct me if I'm wrong and if not someone with better expertise could word it more clearly and add it to the Winchester Model 70 section of the page. Also could someone comment if ranges said by Madsen: 750 yards for M40 and 500 yards for Winchester are correct? Also later they say the time travelling criminal would have had to get his weapon of choise from a special gun shop because the rifle model is old. The model 70 is still produced today. Last restart of production was in 2008. Estenwall 15:52, 10 July 2012 EEST

Any decent bolt gun is accurate to far beyond that. Modern boltgun don't have sights graduated out to 2000+ yards like old military rifles, but they are effectve to very long range. Any bolt-action in .308 or higher should be usable, with a scope and some training, to 1000 yards. There's a civilian program-I forgot the name- whos sole purpose is to teach you to be able to hit targets at 500 yards with iron sights. In short: nobody has a clue what they're talking about on that show.--Mandolin 09:05, 10 July 2012 (CDT)

In the episode 7 when Madsen and Hauser raid the abandoded school chemistry class. Both turn their lights off and even the clicks of the switches is heard. To me it seemed Hauser had a taclight fitted to the bottom of his Glock's grip. I'm not sure is Madsen light was fitted or if she just held a flashlight with her hand. In many other episodes the light clearly is a separate flashlight. This bugs me as another impracticality and mistake in this show. She uses a gun and a flashlight in almost every episode. Couldn't the shows armorer tell them that a fitted tactical light would be cooler, more practical and maybe more realistic? --Estenwall 18:23, 12 July 2012 (EEST)

Seeing as how Madsen's carry gun is a Glock 26 which doesn't have an accessory rail, it can't easily be fitted with a light. Even if whe was carrying a Glock 19 or something else with a rail, having a light attached to your gun makes it a lot more bulky for plain clothes carry. It also means that unless you want to carry two lights, if you want to look at something in the dark you need to be pointing your gun at it. In real life police generally don't have torches fitted to their carry weapons. --commando552 10:50, 12 July 2012 (CDT)

Ah. I didn't even think of if it had or hadn't an accessory rail. I just though all Glocks had a place infront of the trigger guard. Taclight for Glocks that I've seen are quite small and Madsen wears shoulder holster sling thing under her jacket. A taclight would also affect ability to holster the gun wouldn't it? I bet though that there are holsters for guns with taclights too. --Estenwall 23:30, 12 July 2012 (EEST) 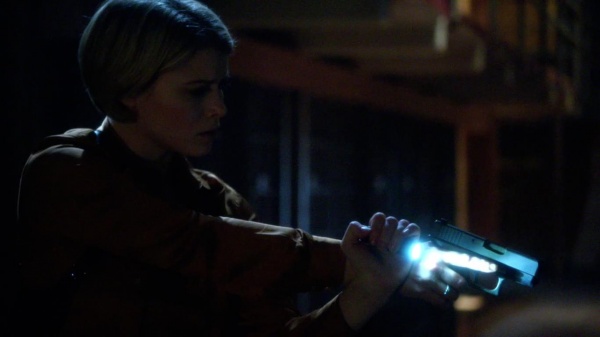 Insp. Madsen with her Glock 26 drawn. 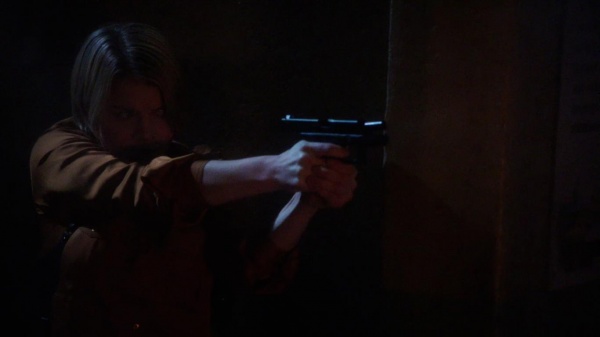 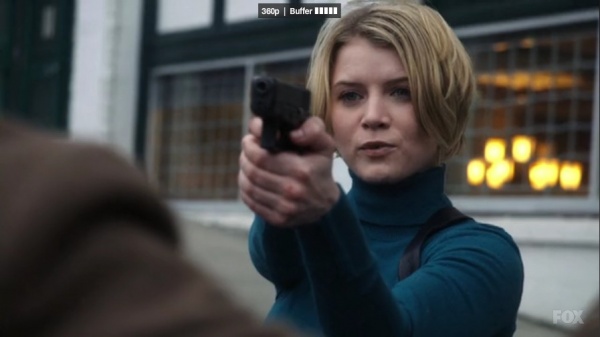 Insp. Madsen with her Glock 26.

Trying to finalize to page

Hopefully within the next few weeks, I will get more screenshots and try to get the page to complete status. I welcome anyone who wants to add anything. I have removed all the screenshots that where from the internet and had the buffer above them. All of the episodes are available on DVD and in HD on iTunes.--Coltmth (talk) 08:57, 7 July 2014 (EDT)

People have busy lives you know. Right now, I have two part time jobs where I am almost working seven days a week, eight hours each day. I have contributed a lot to this page. It is difficult when I see pages that I like are updated on a regularly basis. The first season of the Blacklist is still incomplete. I just know that there is people who have more time on their hands then I do.--Coltmth (talk) 11:39, 8 July 2014 (EDT)

Others have busy lives too, which is why you can't just wait for someone else to jump in and finish the page you started, especially since the show got cancelled because it just wasn't that popular in the first place. And it's odd to "welcome anyone who wants to add anything" and then say you removed a bunch of screenshots in the very next sentence. You can keep waiting for someone to jump in, but after two years, you may just have to do it yourself. We've laid out instructions on how to obtain screenshots here, and if you have any questions, please do ask. --Funkychinaman (talk) 12:43, 8 July 2014 (EDT)