When it says helicopters are featured as "playable aircraft", does that mean you can fly them or does it simply mean you're manning the guns on them as in the GRAW games or MoH's Apache mission? Spartan198 00:56, 12 August 2011 (CDT)

That's what I'm wanting to know, if we'll fly them. Gunner missions are so common in shooter games today that manning a minigun in the door of an MH-60 really only gives me the "been there, done that" feeling. Spartan198 02:48, 28 August 2011 (CDT)

I'm certainly hoping that doesn't end up being the case. It would kinda suck to have an aircraft in an Ace Combat game that you couldn't actively maneuver, plus helicopters have aerobatic capabilities conventional fixed-wing arcraft lack and it would be a shame not to be able to exploit them during gameplay. Orca1 9904 03:17, 28 August 2011 (CDT)

Just saw a video showing Apache gameplay. Also saw infantry with shoulder-fired weapons referred to as "RPGs" in the game, but not clear enough to see what kind, and they also seemed able to lock onto the aircraft. Also saw what looked like a few ZU-23-2 AA guns. Orca1 9904 00:37, 13 September 2011 (CDT)

"RPG" and "SAM" are two types of infantry; I don't think we'll be able to ID based on the demo, they're always pointing them straight at you. Edit: Actually, I think I've got both; RPG is a Type 69 (one grip), while the SAM is a *really* blocky Stinger. Also for trivia purposes (or just incidental ID in a caption) the wheeled SAM launchers look like SA-8 Gecko. Not sure what the 4-wheeled APCs are, though. Evil Tim 06:52, 26 September 2011 (CDT)

The demo is out on XBox Live. It has two missions, one jet mission and one helicopter mission. I've only played the jet mission. It's the same mission as from the first trailer. It feels the same except for the new dogfight mode will take some getting used to. --Funkychinaman 01:05, 25 September 2011 (CDT)

Depends if the release build forces it on you as much as the demo does; keep in mind the demo has to show off the new features like that. The Wierd It 03:45, 25 September 2011 (CDT)

It's at least less useless than Assistance Off in HAWX was. And hopefully we also won't have any point-and-click UAV missions. What the hell was Ubisoft thinking with those? Evil Tim 06:48, 30 September 2011 (CDT)

One thing you'll quickly see is this game was never designed to be screencapped. There is a ton of motion blur, rotor dust blur and depth-of-field conspiring to make stills look horrible, even though it looks fine in motion. Evil Tim 11:41, 26 September 2011 (CDT)

Finally played the helicopter mission of the demo. Is it just me, or are the guys on the ground completely helpless? It's like they dropped in Cub Scouts to rescue this guy instead of Deltas. --Funkychinaman 22:26, 30 September 2011 (CDT)

And since when is doing a barrel roll in a chopper at low altitude considered an effective and authorized evasive maneuver? I'm pretty sure they don't teach that move in any Army pilot training evolution. Orca1 9904 01:30, 1 October 2011 (CDT)

They can actually shoot things, though unless you're basically landing on top of people to screencap them you're unlikely to notice. The red targets, you can shoot but they can't. You also see green targets on the minimap (mostly infantry, I saw one RPG) who ignore you and will be killed by the Delta boys if you don't get them. Also want to see how they're going to manage a bunch of rebels building a massive flying fortress or railgun, should be hilarious. Evil Tim 02:24, 1 October 2011 (CDT)

I actually failed the mission when ONE technical got past me and inflicted too much damage on the ground force. I can understand them not being able to handle an armored car or the tank, but a technical? Taking out twenty Deltas? --Funkychinaman 02:59, 1 October 2011 (CDT) 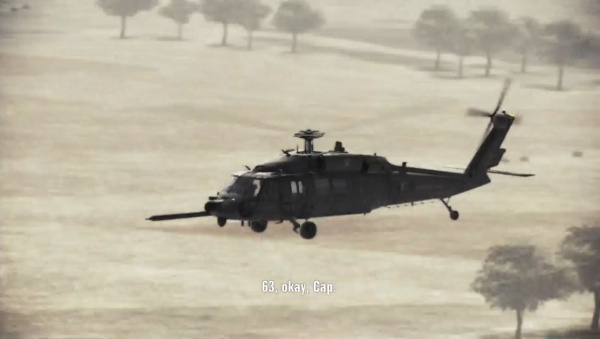 Friend of mine says MH-60L. Also, anyone notice that two of the Hind-D's pylons are empty, meaning it has two rocket packs (same as the Apache) and four AT missiles (same number the Apache actually fires with the second special weapon)? I assume this means we'll have the choice of what helo to use in that mission. Evil Tim 02:55, 30 September 2011 (CDT)

No, you can pilot the Hind, it's just woefully inferior to the Apache. Even the armor seems thinner, whereas Hinds in reality are notoriously tough. Spartan198 (talk) 08:33, 29 September 2012 (EDT)

Has anyone bought the AV-8B Harrier II+ DLC?

Just wondering how it handles compared to other conventional aircraft, since it's one I've always wanted playable in the series. I know the game doesn't let you hover (otherwise the F-35B would logically have had the ability, too), but does it get any increased turning radius or does it basically just function the same as any other fighter except slower? No need to go into exact stats, just wanting a rundown on it as to whether it's worth buying or not. Spartan198 (talk) 08:33, 29 September 2012 (EDT)

I think they're close enough that we could get away with calling them M4s and AK-47s. Opinions? Also, I'd like to change the captions to use character names instead of callsigns (where applicable) since these are actual characters with appearances and voices instead of faceless, nameless mutes like Mobius 1, Blaze, and Cypher. Spartan198 (talk) 12:25, 10 August 2015 (EDT)