The following weapons were used in the film Survivor (2015):

A suppressed Beretta 92FS Inox is the sidearm carried by Nash "The Watchmaker" (Pierce Brosnan). 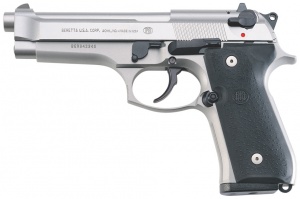 A suppressed Beretta 92FS Inox is used by Nash "The Watchmaker" (Pierce Brosnan).

Closeup of the USP compact.

Kate Abbott (Milla Jovovich) holds Bill's gun during a confrontation with Nash (Pierce Brosnan), only to discover that it is empty.

Nash aiming with the rifle. Note the magazine on the gun, meaning that this is the updated M1 variant.

Another angle showing the rifle's reciever.

A US Marine sniper team atop the roof of the US Embassy in London are armed with what appears to be a mock-up of a MK12 Mod 1 SPR, fitted with a Harris bipod, 20-round magazine, and Magpul PRS stock. Note the incorrect A2 flash hider, slab sided receiver and M5 RAS in place of the K.A.C FF Mk12 Mod1 RAS

The Marines with the rifle.

Another view of the rifle held by the Marine sniper. Notice in this shot the rifle also appears to have a slab-sided lower receiver with no fencing around the mag release

M4A1 Carbines fitted with ACOG Scopes and vertical foregrips are used by Marines in the film.

US Marines armed with M4A1 carbines.

Taliban fighters in Afganistan are armed with AK-47 assault rifles.

AK rifles are seen in the hands of Taliban.

In Taliban's arms depot in Afghanistan is seen what appears to be a PKM machine gun (far left).

In Taliban's arms depot in Afghanistan is seen what appears to be a PKM machine gun (far left).

A US Blackhawk helicopter is seen armed with an M134 minigun.

A US gunship is seen armed with an M134 minigun.

A Taliban fighter uses a RPG-7 rocket launcher with a PGO-7 scope.

A Taliban fighter uses a RPG-7 rocket launcher with a scope.