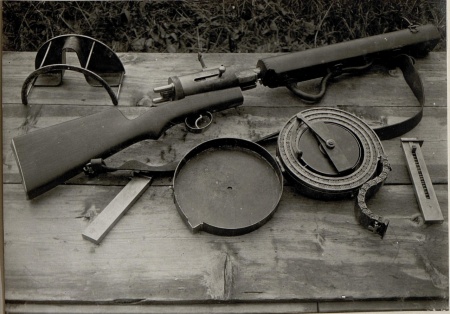 Standschütze Hellriegel 1915 heavy submachine gun with straight magazines and open ~160-round drum - 9x23mm Steyr (speculated). The strange object at the top-left is a weighted base for the drum to hold it upright, since it did not actually mount to the gun and was rested on the ground next to it. 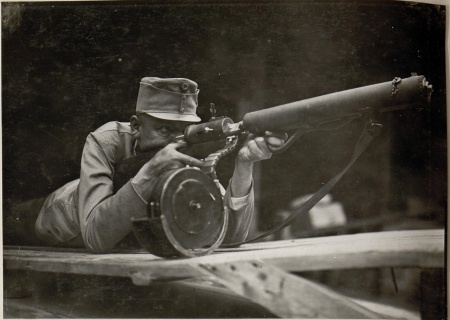 Standschütze Hellriegel 1915 heavy submachine gun with ~160-round drum - 9x23mm Steyr (speculated). This is how the drum was actually employed.

The Standschütze Hellriegel 1915 is an obscure Austro-Hungarian submachine gun made during World War I. The weapon is a mystery and subject of more speculation than facts, as no models are known to have survived, and the only visual evidence the gun ever existed is three pictures from the Austrian National Library showing a prototype being tested, captioned Maschinengewehr des Standschützen Hellriegel ("Standschützen Hellriegel Machine Gun"; Standschützen refers to the Austro-Hungarian reserve forces during World War 1, while Hellriegel is an Austrian surname) and dated October 1915. The caption likely means that it was designed by someone named Hellriegel who was a member of the reserve forces. The weapon's common name is a composite of the caption and the dating (Standschütze being the singular form of Standschützen).

As of current knowledge, there was only ever one example of the Hellriegel and it did not survive the war. Its caliber, capacity, operating method, and whether or not it was even a functional weapon are conjecture based on analysis of the photographs and historical context. It is assumed to have been blowback operated with the projections at the rear being a pair of recoil springs, and the large structure over the barrel is thought to have been a leather-wrapped water or oil jacket for cooling.

It could feed from straight box magazines, or from a large drum magazine which was not actually connected to the weapon and instead fed the cartridges through a flexible chute. The unusual appearance of this drum magazine led to some assumptions that it was belt fed, however this is not the case with the rounds being unconnected from one another and are propelled along the drum and feed chute by a spring in a similar manner to the Trommelmagazin snail drum used by the Luger pistol. The drum magazine is believed to be able to hold up to 160 rounds while the box mag is limited to 20 or so.

It seems to be crew-served, as one image depicts an ammo bearer with a backpack for drum magazines, and its seeming intention to be used as a stationary weapon given its weighted base for the drum and its machine gun name (making it a "heavy" submachine gun of sorts). The provision for a drum but not a bipod however, means it is unclear what exactly the weapon was intended to be used for.

All three pictures were taken from the right side of the gun, so what the left side looked like is a complete mystery.

The Standschütze Hellriegel 1915 and variants can be seen in the following films, television series, video games, and anime used by the following actors: