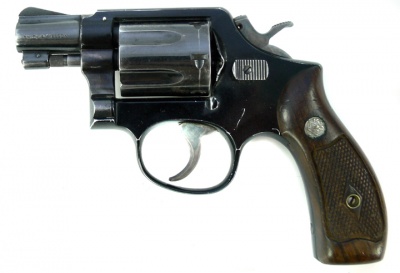 The Smith & Wesson Model 12 was the Airweight version of the Smith & Wesson Model 10. It had an aluminum alloy frame with a steel cylinder and barrel. It was chambered for the .38 Special and was available with a 2 inch and 4 inch barrel. It was available with either a blued or nickel finish and round and squared butts. It was manufactured from 1952-1986.

Collectors Note: In 1966, the French Government placed a large order for over a thousand Model 12s with the 2 inch and 3 inch barrel, blued finish and round butts.The Model 12s were issued to the French police. The unusual thing about these specimens was a safety latch on the right side of the frame. When pushed forward the latch locks the hammer and trigger. It is estimated that between 12 - 18 of the French Model 12s remained in the United States since they were production overrun. The Standard Catalog of Smith & Wesson. 3rd Edition places a value of $4,200 (USD) on the U.S./French Model 12s. The models that were shipped to France were destroyed when the French police went to different models.