Shanghai is a 2010 mystery thriller film directed by Mikael Håfström and is set in Shanghai just prior to the Japanese surprise attack on Pearl Harbor in 1941. The film centers around an American agent who is in Shanghai and discovers that his friend has been murdered and must work with a Chinese warlord and a Japanese officer to find the killer. The film's cast includes John Cusack, Chow Yun-Fat, Ken Watanabe, Jeffrey Dean Morgan, and Gong Li.

The following weapons were used in the film Shanghai (2010):

A disguised resistance fighter fires at the Japanese.

Yuan (Andy On), a Chinese resistance fighter, is armed with a Mauser C96 "Broomhandle" pistol. 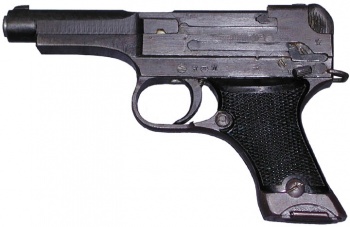 A Browning Hi-Power is seen.

A Browning Hi-Power is seen.

Two Carbines on the left.

A Chinese resistance is seen with a Gewehr 1898.

The resistance fighter working the bolt. The Lange Visier can be seen.

Short barreled Side by Side Shotgun (Sawed-off)

Shanghai Triad and resistance fighters use short-barreled Side by Side Shotguns.

A resistance fighter fires a short-barreled shotgun at Japanese diplomats.

Anthony Lan-Ting (Chow Yun-Fat) takes a shotgun from the back seat of his car.

Chinese resistance fighters use a Type 67 Stick Grenade to kill some Japanese officers in a bar.

A Type 67 stick grenade is seen.

A Japanese soldier fires a Type 100 Grenade Launcher mounted on his Arisaka Type 38.

A Japanese soldier fires a Type 100 grenade launcher mounted on his Arisaka Type 38.