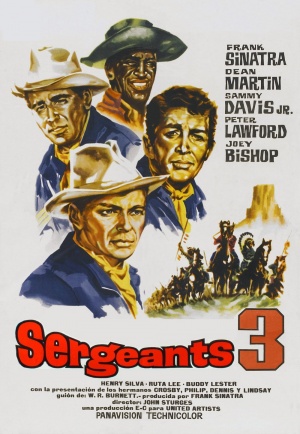 Sergeants 3 is the 1962 remake of Gunga Din starring Frank Sinatra, Dean Martin, Peter Lawford, and Sammy Davis Jr., directed by John Sturges. The film transplants the story from British India to the American West, with Sinatra, Martin and Lawford playing a trio of US Cavalry NCOs and Davis as an ex-slave longing to join them. This was the last film to star the five members of the Rat Pack, Sinatra, Martin, Lawford, Davis, and co-star Joey Bishop, prior to Sinatra's public falling out with Lawford.

The following weapons were used in the film Sergeants 3:

An even better shot of the Colt-style cylinder latch as Sgt. Deal clubs a brave in the head with his revolver.

Merry with his Winchester.

Deal with his Winchester.

A barfly uses a Sharps Carbine.

A barfly takes aim with his Sharps.

Jonah drills with his cut down Trapdoor Springfield.

Cavalry troops are equipped with a pair of field guns.