The following weapons were used in the film Route 666: 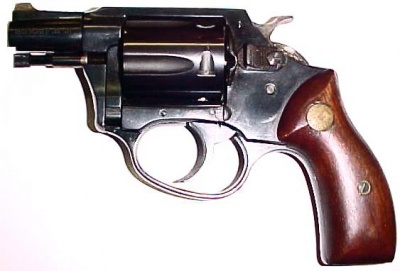 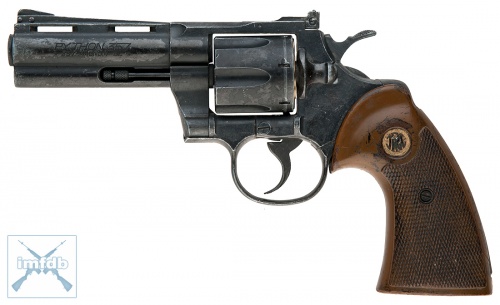 Screen Used Replica Colt Python by MGC of Japan. Since the Python was not fired on screen, a non firing replica was used by the actor. This is the screen used prop carried by Adam Vernier.

Deputy Gil Conaway (Adam Vernier) draws his Colt Python on the US Marshals.

Joe (Rob Roy Fitzgerald) carries an Auto Ordnance M1911A1 which he uses to fire on a Russian Hitman (Sven-Ole Thorsen). 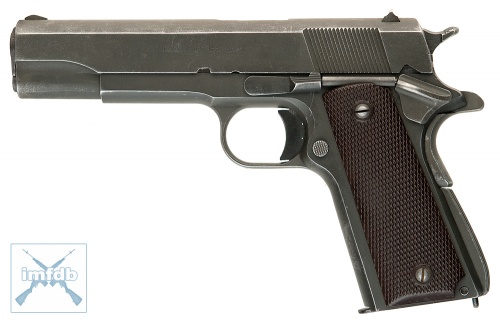 Joe (Rob Roy Fitzgerald) pulls out his Colt M1911A1 before he gets shot.

The Russian Hitman (Sven-Ole Thorsen) screws a suppressor on his IJ-70. Note the adjustable sights

"Rabit" (Steven Williams) using the now unsuppressed IJ-70 to defend himself from the convicts.

Sheriff Bob Conaway (L.Q. Jones) keeps a non-firing Replica of a S&W Model 19 in his holster but never uses it. However Marshal Jack La Roca (Lou Diamond Phillips) manages to take it from him. 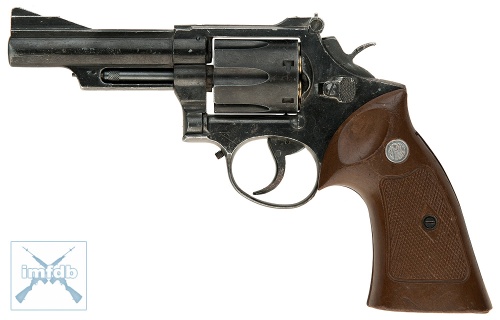 Actual screen used prop - Non-Firing Replica Smith & Wesson Model 19 made by MGC of Japan. This is the replica used by L.Q. Jones and Lou Diamond Phillips in the film.

A nickel Smith & Wesson Model 38 is the weapon of choice for Steph (Lori Petty). 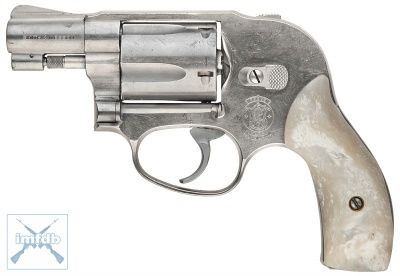 Screen Used Nickel Smith & Wesson Model 38 with Pearl Grips - .38 Special. This is the hero gun used by Lori Petty in the film.

US Marshal Nick (Alex McArthur) uses a Smith & Wesson Model 681 when the undead convicts show up. 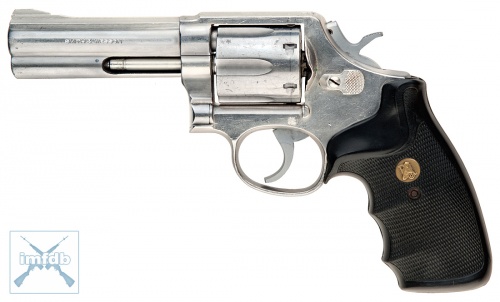 Screen used Smith & Wesson Model 681 - .357 Magnum. This is the hero gun used by Alex McArthur in the film.

Deputy US Marshal P.T. (Dale Midkiff) carries a blued Taurus PT92AF. Nick (Alex McArthur) can be seen with P.T.'s blued version while the undead convicts attack them and Sheriff Bob Conaway (L.Q. Jones) takes it from P.T. in the finale. 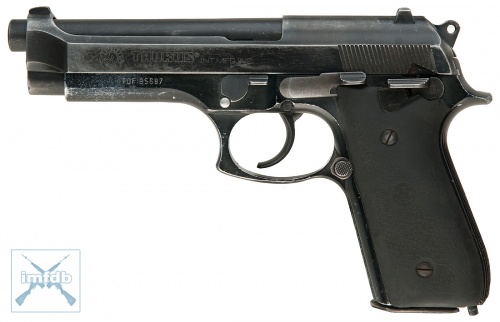 P.T. (Dale Midkiff) draws his Taurus PT92AF on the undead convicts. Note the cocking serrations which differ from a Beretta 92FS.

Nick wildly fires what is most likely P.T.'s PT92AF at one of the convicts.

The frame mounted safety is visible in this shot. 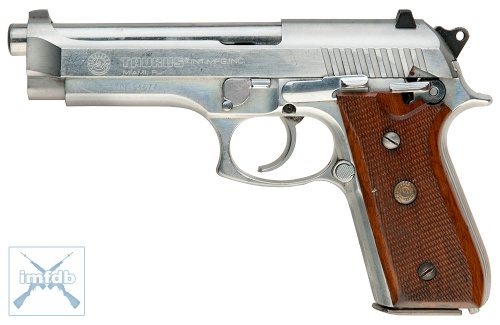 Screen used Stainless Taurus PT92AFS - 9x19mm. This is one of the hero guns used by Lou Diamond Phillips.

Marshal Jack La Roca (Lou Diamond Phillips) with one of his Taurus PT92AFS.

Jack shooting off the lock on the gate to Route 666. In real life the round would have ricocheted right back to him.

During the multiple flashbacks to the death of the convicts, Bob Conaway (L.Q. Jones) can be seen with a Double Barreled Shotgun.

A Sheriff and Bob Conaway (L.Q. Jones) used a Remington 870 with a speedfeeding stock.

Screen used Remington 870 Police Magnum with black synthetic furniture - 12 Gauge]. This is the hero gun used by L.Q. Jones and Steven Williams in the film.

A Sheriff with a Remington 870.

A closeup on the Remington 870.

One of the Russian Hitmen can be seen with a SWD/Cobray Street Sweeper.

A Russian Hitman with a Cobray Street Sweeper.

The Hitman about to fire his Street Sweeper.

The Hitman lying dead with his Cobray.

Guards in the flashbacks appear to be armed with Winchester Model 1897 "Trench Gun"s.

A Hitman aiming his Norinco Type 56-1.

A Hitman (Sven-Ole Thorsen) about to fire his Type 56-1. Note the hooded front sight a feature exclusive to Chinese AKs.
Retrieved from "https://www.imfdb.org/index.php?title=Route_666&oldid=1437756"
Categories: