Return of the Pink Panther, The

The following weapons were used in the film The Return of the Pink Panther:

A Smith & Wesson Model 10 revolver is seen held by a bank robber at the film's beginning.

The revolver can be seen above the Monkey

A bank security officer is seen pulling what appears to be an M1911A1 on the escaping thieves, but is soon knocked unconscious by Clouseau.

Chief Inspector Dreyfus (Herbert Lom) keeps what appears to be a Beretta M1934 in his desk drawer which he confuses with a cigarette lighter that is also shaped like the handgun. Hilarity ensues!

Dreyfus finds he holds the lighter on Clouseau instead of the pistol.

Dreyfus takes what he thinks is the lighter.

"I put the real one in the bottom drawer. See?" Dreyfus holding the pistol sideways.

Sir Charles Litton (Christopher Plummer) takes a Luger P08 from Pepi (Graham Stark) and holds it on him.

The men who find Pepi in the auxiliary gas tank pull Browning Hi-Power handguns on him. 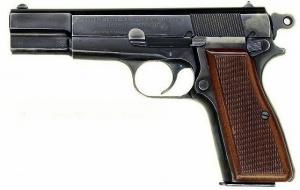 A thug carrying what appears to be a Browning Hi-Power.

An FN Model 22 appears to be the pistol pulled by Col. Sharky (Peter Arne). The movie version does not have the external extractor of the Model 22, but since the gun is never fired it's possible it's a rubber prop.

Sideview of the pistol.

A breakdown model of the M1 Carbine is used (sometimes with a suppressor) by Chief Inspector Dreyfus.

World War II Era M1 Carbine, with Dark Walnut Stock, 'L' peep sight and no bayonet lug - correct for most of WW2, shown with khaki sling and oiler and a period twin magazine pouch for buttstock

The carbine being assembled.

Closeup of the large suppressor on the carbine.

Dreyfus with the scoped carbine.

The thief uses a scoped crossbow of uknown model during the Pink Panther heist.

The thief recocks the crossbow by manipulating the stock.