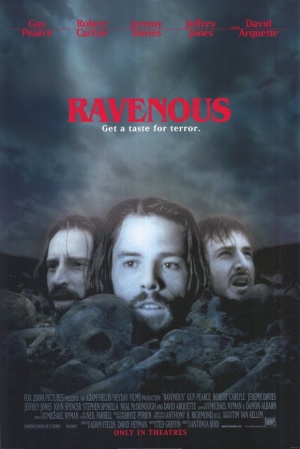 The following weapons appear in the film Ravenous:

Captain Boyd (Guy Pearce) can be seen using a Colt Walker during the Mexican-American War, and Colonel Hart (Jeffrey Jones) owns one frequently used by Private Reich (Neal McDonough). FW Colhoun (Robert Carlyle) also acquires one from Colonel Hart after he has already given it to Reich. This is somewhat historically accurate, as the US military purchased the Colt Walker during the war, but never in large numbers.

Boyd with his Colt Walker

Boyd with his Colt Walker

Hart with his Colt Walker

Private Reich (Neal McDonough) owns a Springfield flintlock musket which is never clearly seen, likely a Model 1840. It is odd that the Fort's most competent soldier carries it's least modern weapon.

Boyd with his Springfield Musketoon

Mexican soldiers are seen armed with Springfield 1861 rifles with fake frizzen's added to appear to be flintlocks. This is somewhat odd, as the historically correct Brown Bess muskets are readily available.