Papillon is a 1973 feature film adaptation of the autobiographical novel written by Henri Charrière. Directed by Franklin J. Schaffner, the film stars Steve McQueen as Charrière, nicknamed Papillon, a safecracker who is sentenced to a French penal colony for a murder he says he didn't commit and befriends Dega (Dustin Hoffman), a counterfeiter who agrees to pay if the two can find a way to escape the colony. The film would later be remade as a 2018 feature starring Charlie Hunnam and Rami Malek.

The following weapons were used in the film Papillon:

What appears to be a Colt Official Police revolver is pulled by the South American Police on the beach when confronting Papillon and Dega.

The Gendarmes are armed with Spanish copies of the Erma EMP submachine gun when escorting the prisoners through the streets at the start of the movie. This is accurate; the French Gendarmerie acquired several thousand Spanish EMP submachine guns after the Spanish Civil War.

The Gendarmes are armed with Spanish EMP submachine guns when escorting the prisoners.

Berthier Mle 1907-15s are used by French Soldiers and Penal Colony guards as well as Papillon (Steve McQueen), Dega (Dustin Hoffman), Maturette (Robert Deman) and Breton (John Quade). During the First World War Berthier rifles were chosen for colonial troops, instead of the Lebel 1886 (rifles erroneously credited before on this page), so the film is historically correct as it is set in 1930.

A guard chambers his rifle. 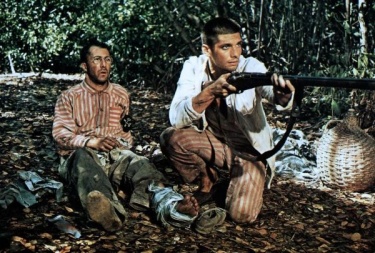 Maturette readies his rifle. For some reason Maturette loads the rifle and ejects a round already chambered.

The colonists have Winchester Model 1892 rifles.

The South American Police use what appears to be vz. 24 Czech Mauser rifles.

Two police officers starts pursuing Papillon. Unfortunately, the rifle is blurred due to the fast motion, but the straight-bolt handle, grasping groove, tangent-leaf sight, and under-mounted sling swivels are visible.

Masked Breton (John Quade), the man with the tattooed face, is armed with a 12 Gauge Double Barreled Shotgun when he confronts the escapees.

Masked Breton (John Quade), the man with the tattooed face, is armed with a 12 Gauge Double Barreled Shotgun when he confronts the escapees.

Masked Breton with the shotgun.
Retrieved from "https://www.imfdb.org/index.php?title=Papillon_(1973)&oldid=1519593"
Categories: