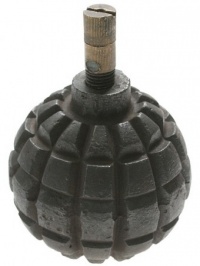 The Model 13 Kugelhandgranate was the first standard hand grenade for the German Imperial Army which was industrially produced in large quantities and delivered to the troops. After the success of massive and effective grenade use during the Russo-Japanese War, the French and the Germans planned their own types of grenades. The pull-friction fuse is made of brass, marked red on the top. The filler consists of black powder, mixed with barium nitrate and potassium perchlorate. The cast-iron spherical body is made of 6 to 8mm thick cast pig iron with large external segments and was filled with 50g of rifle bursting powder and could be made to explode by means of a fuse with friction ignition. Its main disadvantage was its sensitivity to moisture and its weight, which was considered to be too high. on the other hand, its great transport safety was an advantage, as it lacked the detonator of other hand grenade models, which was sensitive to any impact. There was also a specially designed carrying frame that could be used as an attachment to the belt and as a breakaway device when dressing away.

The rifle bursting powder, which was very sensitive to moisture, was replaced by explosives in 1916. The hand grenade body was also improved during the war with 60 to 80 equally sized fragments, which had not proved advantageous for scattering the fragments. This faster-to-produce version was designificated as the Khgr. 13 neurer Art. Because of its weight, the grenade couldn't be thrown far. So, it was often thrown out using a catapult which could throw the grenade up to 300 meters (328 yards). The last version was the Model 15 Kghr. n. A. that had a different fragmented body to simplify the manufacturing process to increase production once again. The pull-friction fuse is made of an alloy and has a reinforced pull-wire. After the introduction of Stielhandgranaten as attack grenades, the Kugelhandgranaten served only for defense in trench warfare, thrown from safe cover. The Kugelhandgranaten were replaced by the compact and lighter Model 17 Eierhandgranaten.

Fuse Time: 7 seconds (or 5 seconds for the red-painted igniters)

To increase the throwing range many Model 13s were mounted on sticks from the Model 15 Stielhandgranate with "Poppenberg'sche" spoon safety (known as Model 13/15).