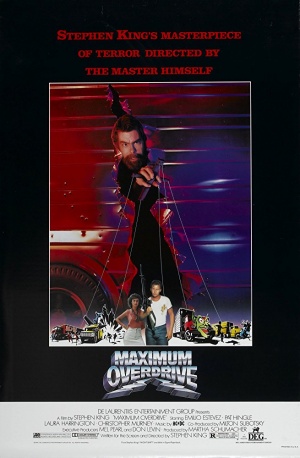 Maximum Overdrive is a 1986 horror film starring Emilio Estevez as Bill Robinson, who finds himself among other human survivors of an all out attack from machines and vehicles that have seemingly taken on a life of their own. The film was notable for being the only film directed by Stephen King, who loosely based it on a short story he authored titled Trucks. King would later state in a 2002 interview that he was "coked out of [his] mind all through its production, and [he] really didn't know what [he] was doing." Later reappraisals of the film would admit its flaws, but argue that King wasn't entirely without merit as a director.

The same story was adapted into a Canadian/American TV movie of the same name with a much smaller budget while being much more faithful to the original story.

The following weapons were used in the film Maximum Overdrive:

M72A1 LAW rocket launchers are used in the film by several characters including Bubba Hendershot (Pat Hingle) and Bill Robinson (Emilio Estevez). The LAW is a disposable, one-shot shoulder-fired weapon, but is seen reloaded in the film several times (with dummy M1 Bazooka rockets) well as being fired from the hip.

Bubba Hendershot (Pat Hingle) fires the LAW from the hip.

The LAW is seen being erroneously being able to be reloaded.

Bill (Emilio Estevez) also fires the LAW from the hip.

An M274 "Mechanical Mule" utility carrier is seen firing a mounted M60 at the survivors in the truck stop diner.

The M60 machinegun mounted on an M274 with the driver's seat removed.

The cable that makes the gun "fire itself" is visible right under the ammo bag. The pintle mount seems to have been modified so the gun does not flop around when it fires or the vehicle moves, a modification that has required the removal of the handguard.

Brad (Leon Rippy) carries a Valmet M78/83 with SVD stock and scope at the films climax. This is likely the same M78 used in Hard Target.

On the right, Brad (Leon Rippy) carries a Valmet M78/83 with SVD stock and scope.

Deke (Holter Graham) uses a Sterling SMG on a drive-thru speaker and later hands the gun over to Brett (Laura Harrington). Bill Robinson (Emilio Estevez) is also is seen carrying the weapon.

On the left, Curt (John Short) uses an IMI Uzi.

The Sten Mk II is seen in the basement arms cache and is carried by Joe (Pat Miller), but not fired.

A Madsen M50 is seen in the armory down in the basement.

There are at least two M16A1s are seen in the diner's basement arms cache.

Curt (John Short) carries an M16A2 when he and Bill (Emilio Estevez) attempts to rescue the bible salesman. Bill also threatens Hendershot (Pat Hingle) with an M16A2 down in the basement. This seems to be one of the first appearances of an M16A2 (probably a civilian HBAR), considering the A2 upper receiver, the improved grip and the heavy barrel.

Handy (Frankie Faison) holds an L1A1 rifle, but is not seen firing it.

The Colt Model 607 is also seen on gun rack next to the M16A1's down in the basement. Also carried by Andy (J. Don Ferguson) during the climax.