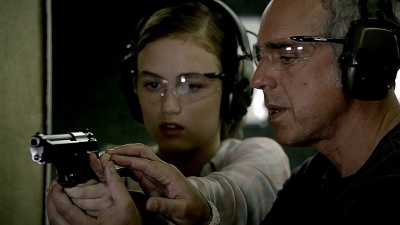 Madison Lintz handling a Beretta 92FS as Maddie in Bosch.

Madison Lintz is an American actress whose first acting role was as the character of Sophia Peletier for the first two seasons of the AMC series The Walking Dead. She is now well known to viewing audiences for her role as Maddie Bosch in the Amazon Prime streaming series adaptation of Bosch and its companion Amazon Freevee series Bosch: Legacy. She also is the older sister of fellow The Walking Dead cast members Macsen Lintz and Matt Lintz.