The Gyrojet is a family of weapons developed in the 1960s by MB Associates. They are named after their gyroscopically stabilizing projectiles. Instead of firing bullets, Gyrojet weapons fire miniature rockets, each containing their own rocket propellant. The rockets leave the barrel with low velocity (famously, enough that the Bugs Bunny trick of sticking a finger in the end of the barrel will actually stop the projectile), but continues to accelerate through its flight as they burn through their propellant (with roughly 0.12 seconds of burn time), reaching about 380 m/s at 9.1 m, with the 180 grain rocket having about twice as much energy as a .45 ACP round. Instead of using rifling to spin the projectiles and stabilize them, diagonal vented ports are used to make the rockets spin.

Contrary to popular conception, the rockets are not explosive. The term rocket merely defines the projectile's rocket-propelled nature.

While overall failing to catch on due to numerous problems, Gyrojet pistols actually saw some combat service with MACV SOG operators in Vietnam (SOG having purchased the pistols under the mistaken impression they were silent), including being used by First Lieutenant George Kenton Sisler, SOG's first Medal of Honor recipient. The all-service A/P25S-5A "pen flare" was also directly derived from Gyrojet technology.

The Gyrojet Pistol/Carbine/Rifle are seen in the following: 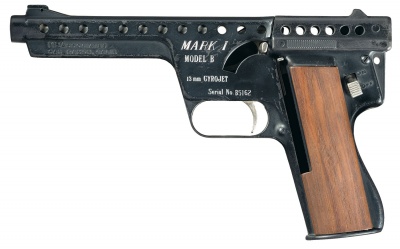 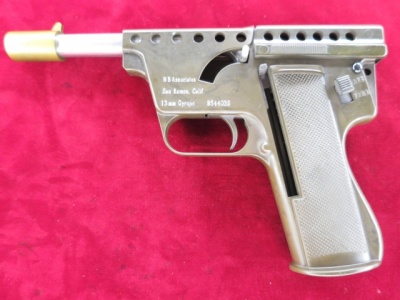 Gyrojet Mark 1 Model B "Survival Pistol" - 13mm. The "Survival Pistol" featured a short telescoping barrel that can be pushed in for storage and pulled out to clear the hammer and improve accuracy. The survival pistol came with a small survival kit that included various projectiles like flares and spears. There are also two different kits: one featured a motorized spear that is propelled by a standard Gyrojet round like a rifle grenade. The second featured its own launchjet rocket engine, which ignites by stroking of the gyrojet rocket on its end. 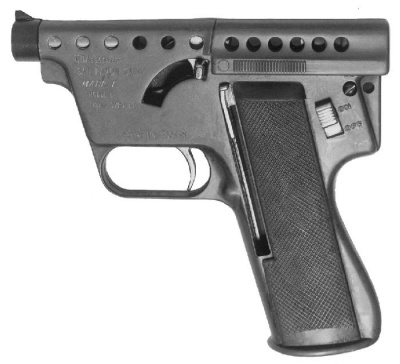 Gyrojet Mark 1 Model B Military Carbine - 13mm. This was the early version of the carbine model of the Model B. It is based on the Model A carbine, but has had part of the stock removed and the carry handle elongated to allow the slide to be retracted.

Gyrojet Mark 1 Model B Sporter Carbine - 13mm. This is the standard production variant which incorporates a standard Model B frame into a streamlined walnut stock.