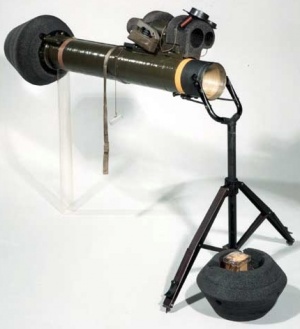 The M47 Dragon is a crew-served, man-portable wire-guided SACLOS (semi-active command line of sight) missile launcher introduced in 1975 and used by the US military. It was developed under the name FGM-77 by Raytheon and manufactured by Raytheon and McDonnell Douglas, replacing the M67 recoilless rifle. It was officially withdrawn from service in 2001, by which point it was heavily supplemented by the the M136 AT4, M141 SMAW-D and Mk 153 SMAW: it was directly replaced by the FGM-148 Javelin. The US Army directed Anniston Defense Munitions Center to begin to destroy stockpiles of Dragons in 2006: 7,000 were destroyed over the next two years, and the remaining 5,433 in 2009, with the final batch of 24 blown up in an ADMC demil pit on September 8th.

The Dragon uses a similar guidance system to other period systems like the BGM-71 TOW, with the sight tracking a thermal beacon on the missile's tail to make course corrections and issuing commands to the missile via wires. It uses a similar soft-launch system with a smaller rocket engine propelling it clear of the launch tube, with a rather strange twist: instead of the missile achieving full flight speed using a main rocket engine and then gliding to the target using wings and steering fins, Dragon's missile lacks control surfaces entirely, with only small stabilising fins at the rear, and has no large second stage engine. It instead features sixty small rocket thrusters along the midsection, angled diagonally towards the rear of the missile, which fire to both keep it in the air and correct its flight path, creating distinctive popping sounds at intervals of half a second to a second as it flies depending on how much it is required to maneuver. For safety, the warhead does not arm until the missile has traveled 65 metres (213 feet): maximum range is 1,000 metres (0.6 miles), increased to 1,500 meters (0.9 miles) on the improved Dragon III missile in 1990.

Like its successor the Javelin, the Dragon is a two-part system with a disposable encased missile and a re-usable sighting unit which is attached to the round prior to use. A tripod mount and vehicle mount were also available for a more stable firing platform. The original M222 missile will penetrate 330mm/13 inches of armor, improving to 600mm/24 inches on the Dragon II's Mk 1 Mod O missile. The 1990 Dragon III adds a precursor warhead for improved performance against ERA and boosts penetration to over 800mm/32.8 inches. The Iranian Saeghe (lightning) surface-to-surface missile system first displayed in 2002 is believed to be a copy of the Super Dragon.

Being a shoulder-fired SACLOS system, Dragon had the problem that while there was no real recoil on firing, the soldier would suddenly be relieved of the weight of the 20-pound missile, which could throw the sight violently off-target and cause the missile to ground itself: for this reason, Dragon was only supposed to be used with its supporting bipod deployed. It was not a well-liked weapon due to being difficult to use: like TOW, there is a short delay between pulling the trigger and the missile firing during which the user will tend to tense up, which was much more problematic for the shoulder-launched Dragon. Moving the sight too quickly will cause the missile to ground itself, not helped by it being notoriously sensitive to small movements. Dragon also has a fearsome backblast with a "danger zone" almost a hundred feet long to the rear in a 90-degree arc, making it practically impossible to fire in a built-up area or indoors without knocking out most of a building's walls first. It was further not liked due to the requirement for the gunner to remain exposed in a seated position for up to 11.5 seconds while the missile is tracking (after kicking up a huge cloud of smoke to give away their position), a tendency for the control wires to break (largely because unlike most wire-guided missiles, Dragon rolls in flight: necessary to bring the banks of thrusters into position but not at all good for the command wires), frequent thruster failures causing erratic missile behavior, and the regular thruster firing making it impossible to not tell when one had been launched. A report by the US Army found Dragon's hit rate under combat conditions to be a dismal 20%. Dragon's single-stage HEAT warhead was quickly rendered obsolete by developments in reactive armor, and by the time it was actually employed in full-scale combat in the Gulf War, it was considered a weapon of last resort.

An inert expended launch tube is relatively easy to get hold of since many jurisdictions treat them in the same way as spent rounds of ammunition: therefore, live-action appearances are likely to only be the fibreglass launch tube with the foam rubber rear shock absorber repaired (since this is blown apart when the weapon is fired) rigged with a pyro charge to simulate firing, and with the sighting unit (which a Dragon missile cannot be fired without, among other things because the weapon's trigger is on the right side of it) either totally absent or replaced with a prop replica. It is essentially impossible for a live missile of any kind to fired on a film set due to the risk to actors and the difficulty of acquiring one in the first place, and so a full working Dragon launcher is only likely to be seen in stock footage.

The M47 Dragon and variants can be seen in the following films, television series, video games, and anime used by the following actors: