The following weapons were used in the film Life and Surprising Adventures of Robinson Crusoe (Zhizn i udivitelnye priklyucheniya Robinzona Kruzo):

Flintlock pistols, seen in the movie, turn out to be sawed-off and visually modified IZh-18 shotguns that often appear in Soviet films, depicting 17th-19th centuries. Robinson Crusoe (Leonid Kuravlyov) carries a pair of such guns. In the final scene he gives them to the captain (Evgeniy Zharikov) and the mate (Valentin Kulik) of the mutinous ship. Fake flintlock pistols are also seen in hands of the mutineers, including their leader, the ship's boatswain (Aleksey Safonov). The mockup pistols differ in the length of the handguards and the shape of the grips.

Robinson holds both pistols when he resques Friday.

The grip of the boatswain's pistol is seen.

The boatswain shoots in air when searching for his crewmembers who mysteriously disappeared from the beach.

The boatswain's pistol is seen at the left. A mutineer at the right holds a mockup pistol with a different handguard.

The captain holds his pistol, preparing to attack the mutineers.

The captain's pistol is seen.

A pistol is seen when the mutineers surrender their weapons. There is a possibility that this particular pistol is not a visually modified shotgun but a real flintlock pistol.

The mate holds his pistol during the night boarding of the ship. This gun has longer handguard that most other pistols.

Robinson carries a long barreled gun with ornate handguard and buttstock. The flintlock seems to be genuine, although it lacks the flint and remains still when the gun fires. A similar long gun that is less elaborated is seen in hands of a mutineer.

The flintlock of Robinson's musket is seen.

The details of the gun allows to identify it as a visually modified top-break shotgun.

A good view of ornate stock.

Robinson fires at goats. The hammer of the flintlock remains still.

Robinson shoots in air in attempts to draw attention on a ship in vicinity of the island.

He raises the gun in desperation. The spur on the trigger guard that is a typical feature of IZh shotguns can be seen.

Robinson shows the usage of the gun to Friday.

One of the mutineers holds a long musket, similar to Robinson's one but less elaborated. 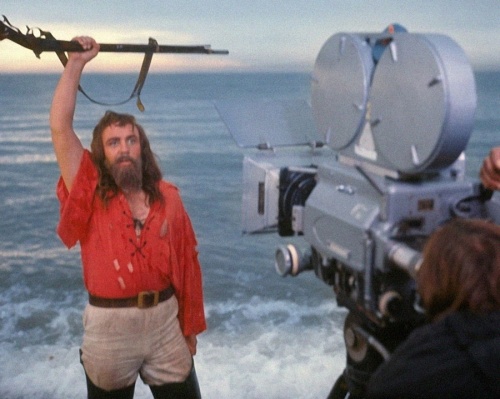 A photo from the set shows Robinson raising his musket. The spur on the trigger guard is seen fairly well.

Most mutineers, notably Will Atkins (Vladlen Paulus) and Jack Woodley (Vladimir Marenkov), are armed with relatively short mockup muskets. Some of these guns are fitted with Blunderbuss-like flared muzzles but not large enough for calling them real blunderbuss.

A mutineer on the foreground holds a short musket with a flared muzzle.

A mutineer in center holds a short musket. The ramrod is seen. The barrel and the ramrod of a long musket in hands of another mutineer is seen at the far left.

Bennet (uncredited) holds a short musket with a flared muzzle.

The boatswain (Aleksey Safonov) briefly holds a musket when the mutineers search for their lost crewmembers.

Will Atkins holds a short musket.

Atkins holds his musket. The flared muzzle is seen.

A naval muzzleloading cannon is seen on the sinking ship in the opening scene. The cannon is most likely a modern replica. 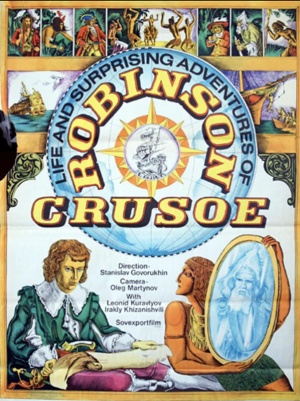