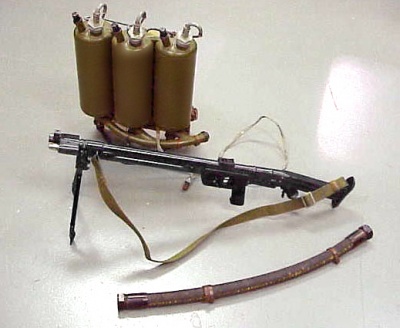 The LPO-50 (Lyogkiy Pyekhotnyy Ognyemyot (Легкий Пехотный Огнемет), "light infantry flamethrower") is an unusual Soviet infantry flamethrower developed to replace the obsolete WW2-era ROKS-2 and ROKS-3 flamethrowers. It is electrically operated using four 1.5-volt batteries for power, with electrically-detonated compression charges to pressurise the fuel, and electrically-fired pyro igniters at the muzzle: this means that the LPO-50 has three distinct 2-3 second "shots" rather than projecting a constant stream. After all three shots were fired the backpack would need to be refilled and fitted with new compression charges or swapped out, and the pyro cartridges at the muzzle replaced. This odd mode of operation was taken from Soviet WW2-era one-shot FOG flame mines, themselves a refined version of a weapon developed in Britain in 1940 called the Flame fougasse.

As a result of only being able to fire three times, the LPO-50 is a rare case of a flamethrower with iron sights, with a hooded front and flip-up rear. Like the ROKS flamethrowers, the flame gun is designed to resemble a conventional gun (in the LPO's case a light machine gun, even mounting a totally pointless bipod), with the goal of making it harder for the enemy to identify flamethrower troops. Unlike the ROKS flame guns, there is no mechanical action: on the ROKS the flame gun had a working bolt-action which was used to cycle blank ignition cartridges. The Soviet preference for these was because pilot-light igniter flamethrowers have trouble igniting their fuel at extremely low temperatures, as Germany discovered during Operation Barbarossa.

The fuel was either ordinary diesel or a special thickened mixture to improve range: maximum range is 20 meters (66 feet) with diesel and 70 meters (230 feet) with thickened diesel.

LPO-50s were exported to many Warsaw Pact nations, and China produces a copy called the Type 74 which is easily distinguished by having two tanks instead of three. The Irish Republican Army also acquired several during the 1980s, which were believed to have been smuggled in from Libya. The LPO-50 was replaced in Soviet service by the RPO Rys napalm rocket launcher, ancestor of the RPO-A 'Shmel', starting in the mid-70s, with the LPO-50 being withdrawn from service by the 80s. A number of these weapons seem to have made their way into the hands of film armorers in Russia and Eastern Europe during the Cold War: they tend to be used as stand-ins for German weapons in WW2 movies.

The LPO-50 flamethrower and variants can be seen in the following films, television series, video games, and anime used by the following actors: