The Knight's Armament Company LMG (KAC LMG), also known as the Stoner 96, or the KAC Stoner LMG, is an American light machine gun. In the early 1990s, famed firearms designer Eugene Stoner collaborated with Knight's Armament Company to improve his previous failed Stoner 86 LMG design introduced by Stoner's ARES company in 1986 (which in turn was derived from the Stoner 63 design). The Stoner 96 scraps the STANAG magazine well alternate feed option on the Stoner 86 and was simplified compared to the 86.

The KAC LMG apparently went through many different designs and only technically went into production in 2016 (before then, it would appear in the KAC website and in some firearms exhibitions, but was always said to be in pre-production).

The Knight's Armament Stoner LMG and variants can be seen in the following films, television series, video games, and anime used by the following actors: 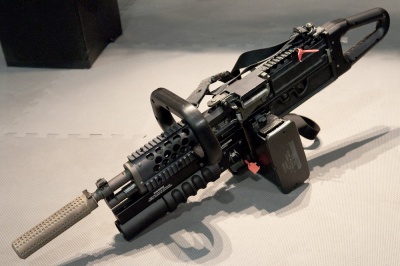 The KAC ChainSAW is a prototype variant of the KAC LMG unveiled at the 2009 SHOT Show. The weapon features experimental ergonomics in the form of chainsaw grips, and can only be fired from the hip.

The Stoner LMG A1 is a variant introducing some changes, such as a KeyMod handguard and a different telescoping stock. It was unveiled at the 2014 SOFIC, and was shown on the official KAC website from 2015 to 2017.

The KAC LAMG (Light Assault Machine Gun), also known as the X-LMG (Extra-Light Machine Gun) in some early publications, is a further improved version of the KAC LMG. It was officially revealed in 2017, though a prototype version of it (then unnamed) was shown at the 2016 SHOT Show. Unlike previous variants, the LAMG has a reversible charging handle (set on the left side of the receiver by default).

The LWAMG (Light Weight Assault Machine Gun) is a 7.62mm NATO version of the LAMG.

It received similar changes (e.g. right-opening feed tray cover) when the LAMG was updated around 2019. This newer version was renamed to AMG (Assault Machine Gun) in 2020.