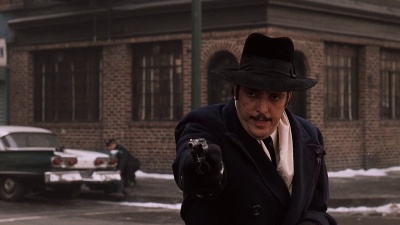 Joe Spinell (1936-1989) (real name Joseph J. Spagnuolo) was an American (of Italian descent) character actor, known from a number of portrayals in classic and cult movies such as The Godfather, The Godfather Part II, Taxi Driver and the first two Rocky films. He was also a friend and frequently collaborated with Sylvester Stallone and director William Lustig.

He's quite known for his horror film genre works, especially Maniac (directed by Lustig) and its unfinished sequel Maniac 2: Mr. Robbie, both which he also wrote and considered some of his most important works. The unfinished duology has a significant cult following and the first film was remade in 2012 (as well as unofficially in Greece in 1989).