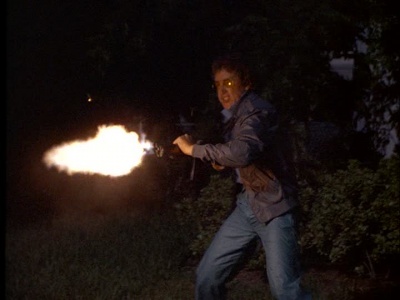 Jim Zubiena served as a firearms instructor on the television show Miami Vice. He was also an accomplished IPSC shooter in the seventies and eighties and was renowned for his speed and accuracy with an M1911A1. The gun handling skills he displayed in the famous episode "The Hit List" from the first season of Miami Vice were real and not rehearsed. He can now be found competing on the Cowboy Action Shooting Circuit. He is also an actor and a member of the Screen Actors Guild (his character is the one giving Glaser Safety Slugs to William Petersen in the 1986 film Manhunter.) He also designed the custom 1911A1 used by Don Johnson in the series Nash Bridges.