The following weapons were used in the miniseries Jamaica Inn: 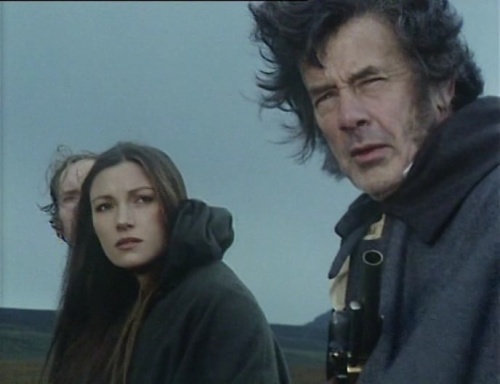 Richards draws the pistol when he and Mary went to the Jamaica Inn. 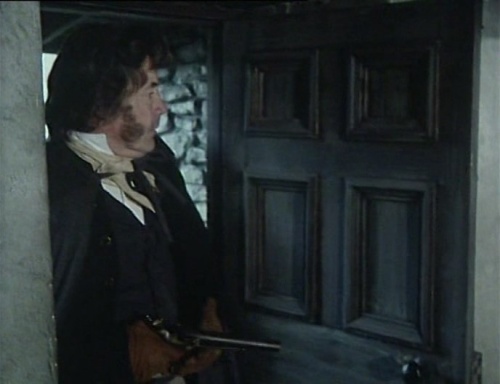 Richards opens the door with the pistol in hand. 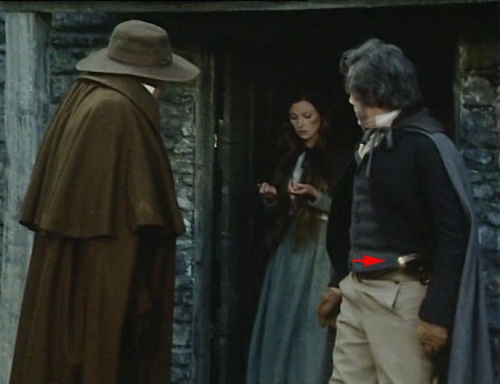 The chief guard (Tony Rohr) in charge of the wagon transporting convicts carries a Flintlock Pistol of unknown model. 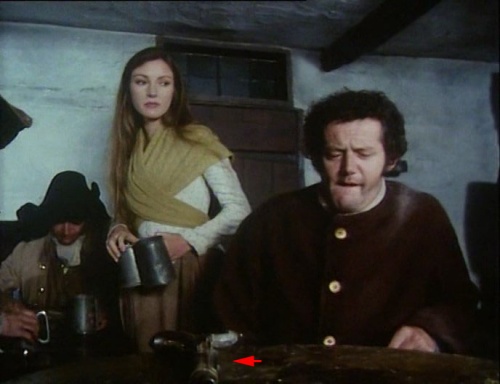 The pistol of the chief guard lies on the table. 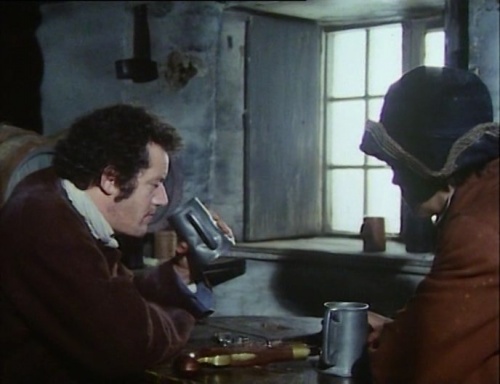 Another view of the pistol on the table. The muzzle cap is similar to French An XIII Cavalry Pistol but the handguard is longer, and the muzzle cap is positioned on the very end of the barrel. 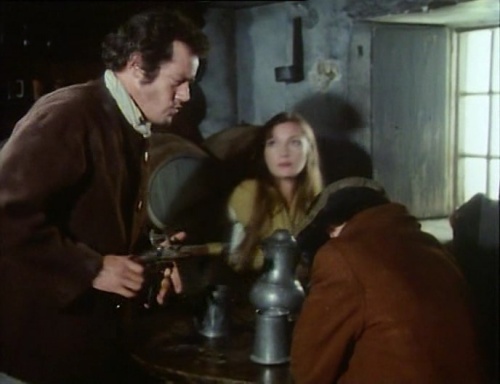 The guard grabs the pistol when he discovers the escape of the convicts. 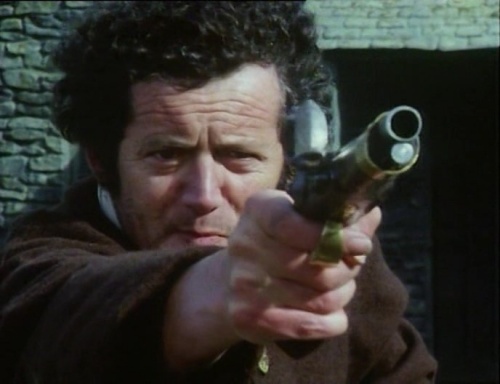 The chief guard aims his pistol at escaping convicts. 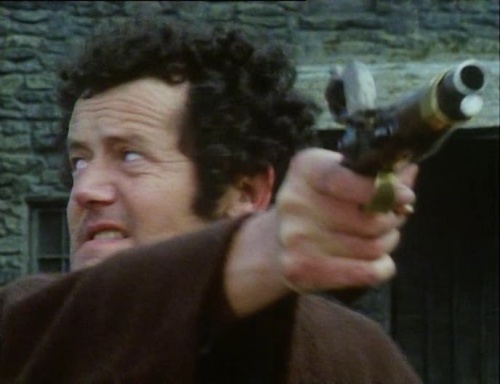 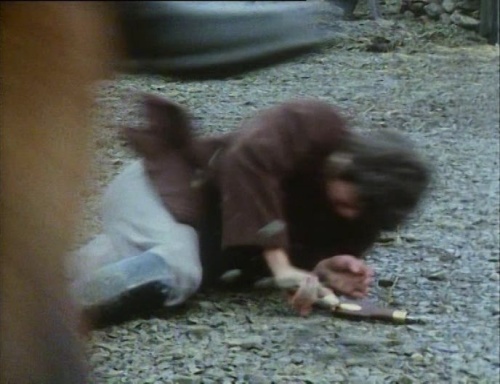 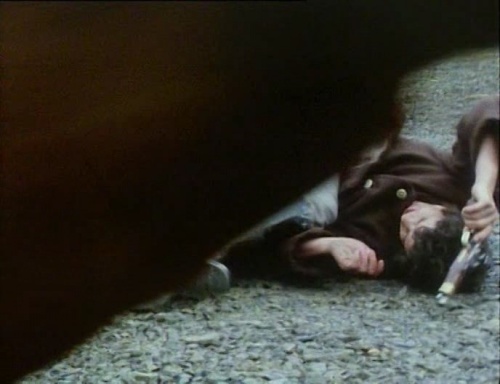 In the same scene one of the guards is armed with a flintlock dueling or target pistol with short handguard and long heavy barrel. 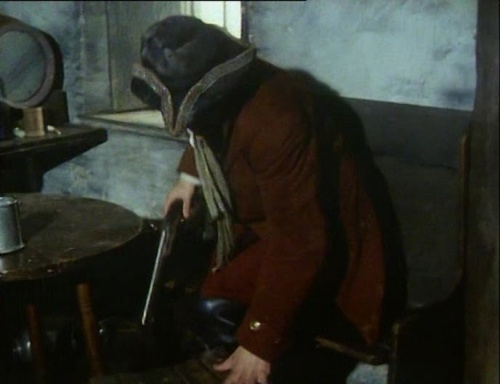 A drunk guard reaches for his pistol. This is a dueling or target model but it's seen too briefly to make a positive identification.

In the climactic scene Jem Merlyn (Trevor Eve) is armed with a Charleville Mle 1777 Artillery carbine. The exact model can be identifed by the infantry style muzzle cap and the sling swivel attached to the handguard. 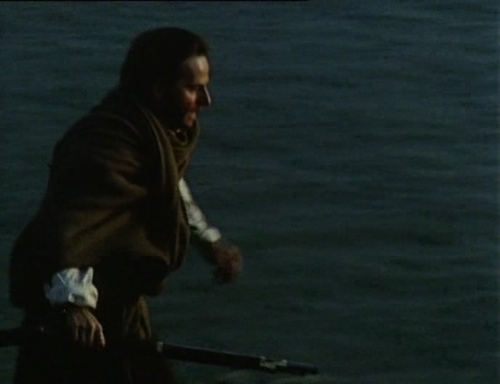 Jem runs with the carbine in hands. 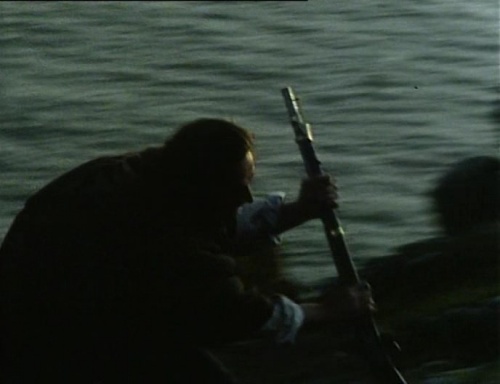 Another view of the carbine. 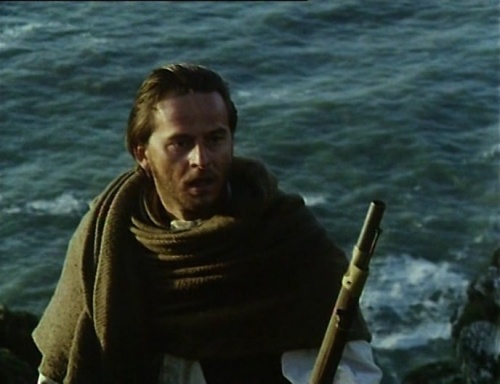 A good view of the barrel. Note the muzzle cap in the same style as the full-length Charleville infantry muskets and the sling swivel, attached to the handguard rather than to the barrel band. 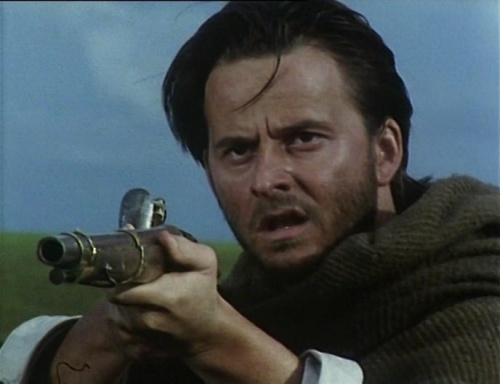 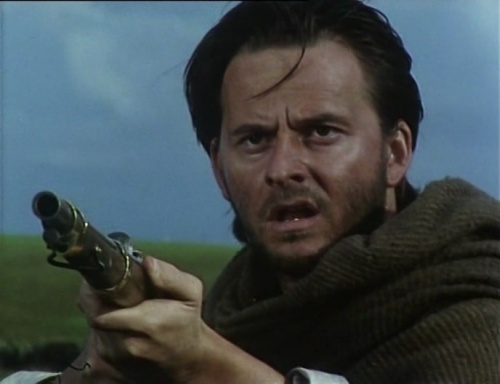 He lowers the gun. 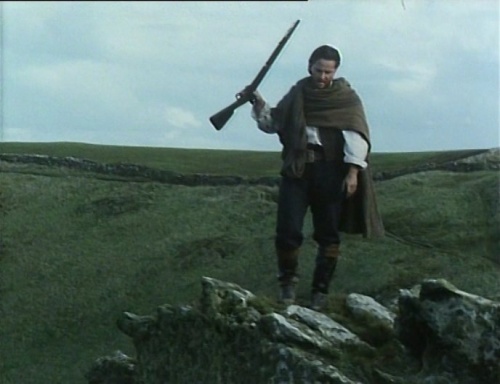 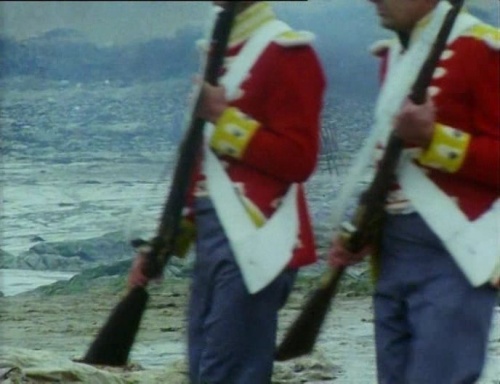 In the opening scene, soldiers with muskets patrol the shore where the organized shipwreck and the subsequent murder of the crew took place. 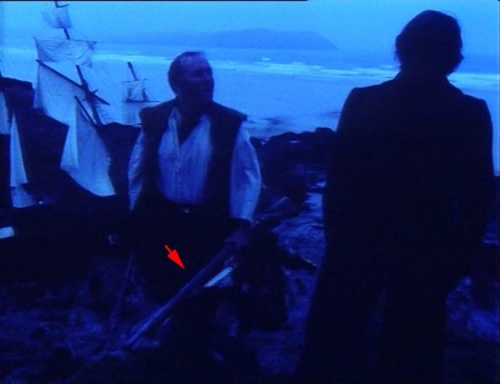 A wrecker holds a pair of muskets taken from the crushed ship. 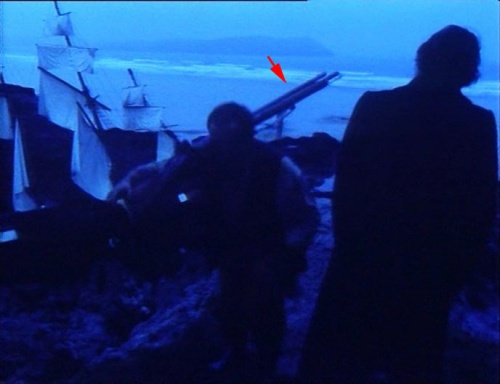 Another wrecker carries two muskets on his shoulder.

What is supposed to be a kind of Charleville flintlock cavalry carbine (may be an Mle 1777 An IX, Mle 1786 Hussar or Mle 1816) or maybe a hunting musket is briefly seen in hand of a squire Bassatt's man. 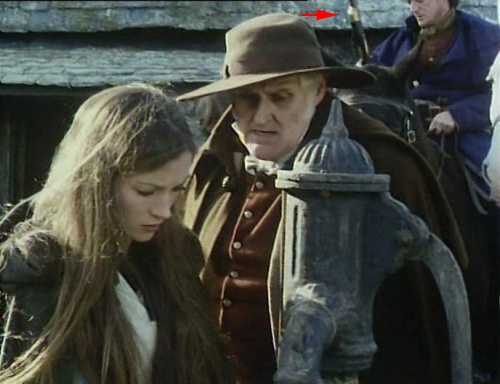 The man at the background holds a carbine with short handguard. The barrel band is seen. 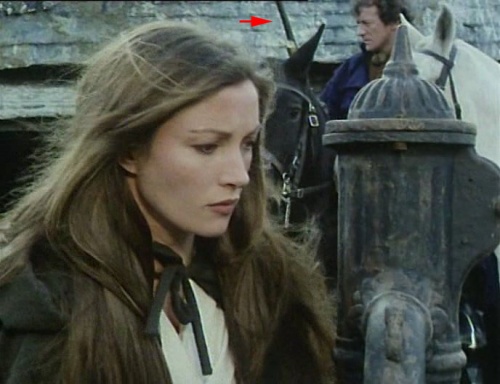 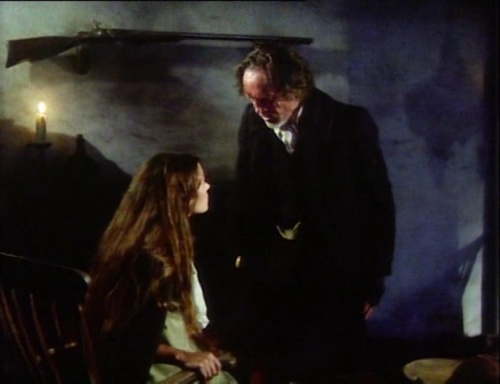 Joss' flintlock fowler is seen on the wall. 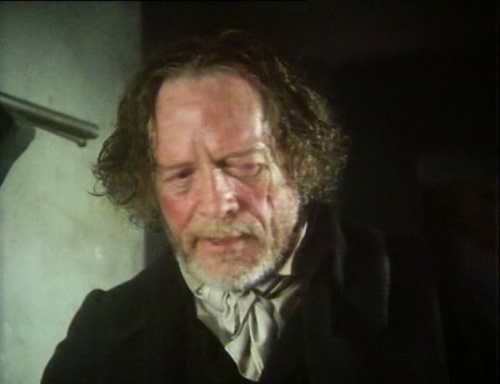 The barrels and the ramrod are seen behind Joss. 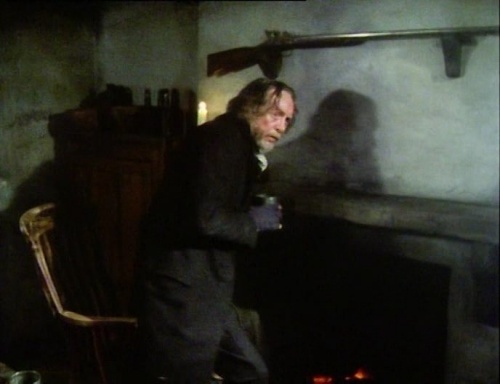 Another view of the shotgun on the wall. 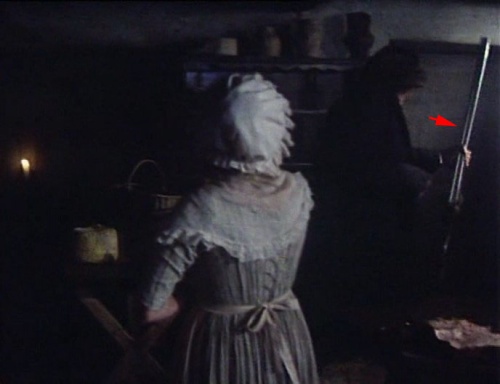 Joss holds the shotgun when he is waiting for the real gang leader to come. 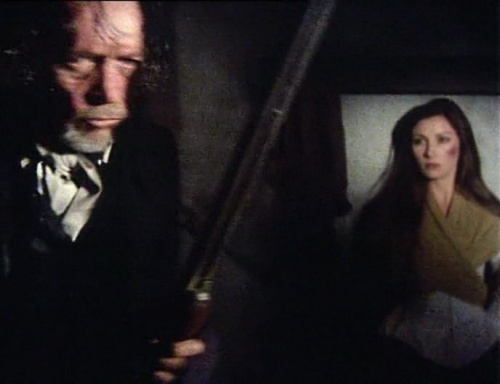 The double barrels, the ramrod below them and the handguard are seen. 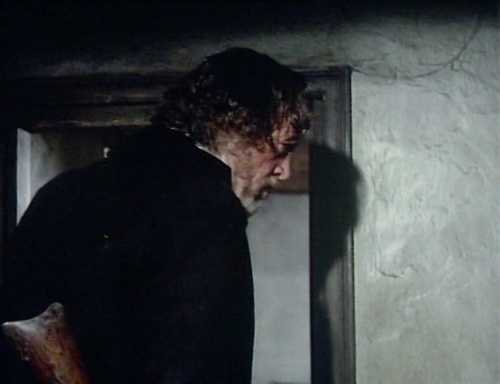 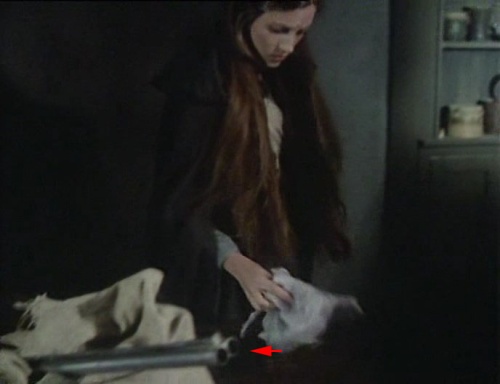 The muzzles are seen when the fowler leans against the table.
Retrieved from "https://www.imfdb.org/index.php?title=Jamaica_Inn_(1983)&oldid=1512784"
Categories: