Jack Reacher is a 2012 thriller directed by Christopher McQuarrie (The Way of the Gun, Mission: Impossible - Fallout). The feature film is an adaptation of the novel One Shot by Lee Child (the author who appears in a cameo in the film as an officer), who created a series of novels featuring the title character. Tom Cruise stars as Jack Reacher, a former US Army investigator living off the grid who emerges after being called upon by a former Army sniper who is accused of a seemingly random shooting of five people in Pittsburgh. The film also co-stars Rosamund Pike, Jai Courtney, David Oyelowo, Robert Duvall and director Werner Herzog in a rare acting role. The film was followed in 2016 with the sequel Jack Reacher: Never Go Back and 2022 with Reacher, an Amazon Prime original series with Alan Ritchson in the role of Reacher.

The following weapons were used in the film Jack Reacher (2012):

Detective Emerson (David Oyelowo) uses a third-generation Glock 19 as his sidearm. He carries it in an IWB (Inside the Waistband) holster. Helen Rodin (Rosamund Pike) also briefly handles the gun in the film, when she hands it to Jack Reacher (Tom Cruise).

3rd Generation Glock 19 - 9x19mm. Note the finger grooves, thumb reliefs, and accessory rail on the frame, which differentiate it from the older model.

Detective Emerson with his Glock near the beginning of the film.

Det. Emerson draws his third-generation Glock 19 in a confrontation with Reacher.

Det. Emerson holds his Glock 19 from behind Helen Rodin while waiting for Reacher.

Jack Reacher with the Glock 19.

A distraught father of one of the shooting victims has a M1911A1 with Rampant Colt grips sitting on his table when he speaks with Helen Rodin (Rosamund Pike). Close inspection reveals the standard spur hammer has been replaced with a Commander-style ring hammer.

A Colt sitting on the father of one of the shooting victims' table.

A thug tries to shoot Jack Reacher with a slightly customized Colt Government Model with a skeleton hammer before being disarmed by him. 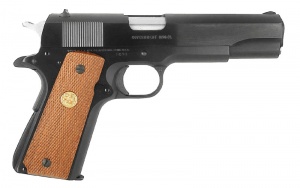 A thug gets disarmed by Jack. The trigger and rear sight aren't visible here, so it can't be determined if it's a National Match. 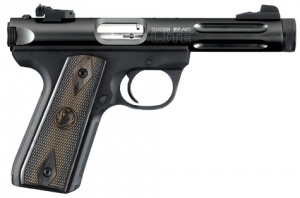 Charlie pulls out his sidearm. 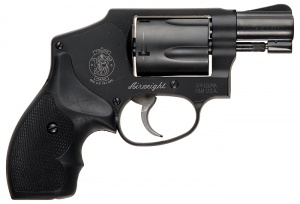 Pittsburgh PD SWAT officers use M4A1 carbines with various attachments in the film. Private Military Contractors in a flashback to Iraq are also seen with M4A1 carbines. Charlie (Jai Courtney) also uses a heavily customized M4A1 fitted with a Magpul buttstock, pistol grip, angled fore grip, MBUS and PMAG. He also has a low power scope, offset red dot sight, free float quad rail, tactical flashlight, extended charging handle latch and a laser designator on his back-up rifle during the climax. Jack Reacher (Tom Cruise) also uses this rifle at a later point. Reacher takes off the scope before entering a close-quarters situation, having no use for it.

SWAT officers arrive at the scene of the shooting. Note the selector is on Safe.

A PMC with an M4A1 in a flashback in Iraq.

Charlie searches for Reacher. Note that the flash hider is not an A2 birdcage.

Jack detaches the scope from the rifle.

One of the Pittsburgh PD SWAT officers uses an M16A4 fitted with a bipod and a scope when responding to the shooting.

The SWAT sniper with his M16A4.

All of the henchmen employed by the Zec (Werner Herzog) use SIG P556 SWAT hybrid rifles during the finale. Jack Reacher (Tom Cruise) uses one with an Aimpoint sight after taking out a henchman with a rock. The rifle used by Reacher has been previously seen in the film Salt, and is a custom rifle that has a SIG SG 550 series lower receiver not seen on the actual P556.

One of the henchmen aims his SG rifle at Reacher.

A henchman holds his SIG hybrid.

The henchman fires at Cash.

Reacher holds one of the hybrid rifles on Charlie.

The Springfield Armory M1A is the main rifle seen in the film. An M1A in a woodland camouflage scheme is used in the shootings in Pittsburgh, and is handled in various scenes by James Barr (Joseph Sikora), Charlie (Jai Courtney), Jack Reacher (Tom Cruise) and Detective Emerson (David Oyelowo). U.S. Marine Corps Gunnery Sergeant, and gun range owner Cash (Robert Duvall) uses an M1A with a wooden stock to provide covering fire for Reacher in the finale. Every M1A in the film is an actual M1A and not an M21/M25 SWS because they all lack the fire selector even though 2 of the rifles seen have cutouts for it in the stock. James Barr is also seen using an M1A in desert camouflage and a makeshift suppressor in a flashback to his experiences as an Army sniper in Iraq, which is strange because the US Army stopped using the M21/M25 SWS in 1988 when the bolt action M24 was introduced. In the book that the film is based on, Barr served as an infantry sniper during the Gulf War(1990-1991). Even though many M21/M25 variants came back into favor in the Iraq and Afghan wars in the 2000s, it is not clear in the movie if Barr served in the Gulf War or the Iraq War(2003-2011).

Charlie aims an M1A near the beginning of the film.

James Barr prepares to fire an M1A in Iraq. Note the rolled-up blanket used as a makeshift suppressor.

James Barr chambers his rifle during Reacher's interpretation of the shootings.

Reacher hands the rifle back to Emerson after examining it.

Cash (Robert Duvall) challenges Jack Reacher (Tom Cruise) to shoot three rounds into the center of a target at 700 yards with a Remington 700 before speaking with him about James Barr.

The Remington is seen on the counter as Cash gives Reacher an extra round for "practice".

Reacher rolls with the Remington 700 in hand before shooting.

Charlie (Jai Courtney) uses what appears to be a PWS MK216 during the final confrontation with Reacher.

Charlie mentally preps himself, with his MK216 rifle in front of him.

Charlie aims his rifle at Reacher.

Charlie aims his rifle, moments before it takes a bullet.

Former USMC Gunnery Sergeant Cash (Robert Duvall) has several handguns on display at his shooting range store. Several hunting rifles can also be seen on the upper left corner, and pictures of Remington shotguns next to them. A crossbow is also visible when Reacher first visits Cash's store.