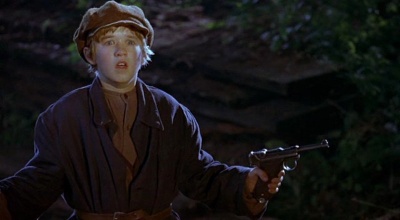 Haley Joel Osment with a Smith & Wesson Revolver "Non Gun" as Winston Morehouse in The Spoils of Babylon.

Haley Joel Osment is a former American child actor best known for his Oscar-nominated performance as Cole Sear in the 1999 film The Sixth Sense. He made his feature film debut as the son of Forrest Gump in the 1994 film Forrest Gump and subsequently appeared in such films as Entourage (2015), Secondhand Lions, and Yoga Hosers.