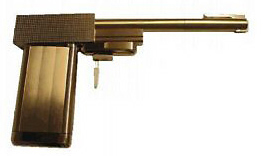 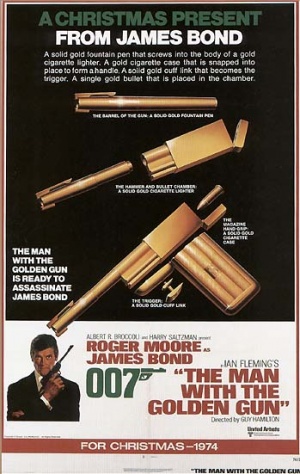 A movie poster details the assembly of the Golden Gun; note that the rear part of the barrel slides out of the cigarette lighter, the lid of which is opened to load the weapon. 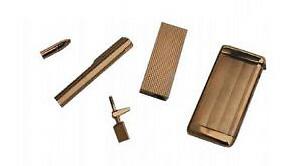 The Golden Gun is a fictional handgun that first appeared as the signature weapon of the infamous assassin Francisco Scaramanga (Christopher Lee) in the film The Man with the Golden Gun as a replacement for his weapon of choice in the novel, which was a gold-plated Colt Single Action Army. Though it would be mechanically possible to fabricate a single shot weapon that looked identical to the version shown in the movie, the actual Golden Gun is a prop.

Three props were created: the first, referred to by the crew as the "gimmick gun," is used mainly in scenes where Scaramanga is assembling the weapon. Most other scenes of the gun being handled use a "stunt gun" which could not come apart, to avoid any potential damage to the more delicate and expensive version, while a third version was built for firing scenes which fires percussion caps. According to one story, the props were fabricated by special effects expert John Stears (who made Scaramanga's "flying car" for the movie) from parts manufactured by Colibri Lighters of London, England - a company famous for its high-end cigarette lighters - and Waterman pens of Paris.

The second story, put forth by Art Director Peter Lamont, states that Lamont designed the weapon and built a prototype from balsa wood with a real gold Waterman pen as the barrel, then approached Colibri to make a final version. This was apparently constructed in a very rushed manner, and was made from cigarette lighter parts which were held together by magnets; this prototype was rejected due to its tendency to fall apart while being handled. Lamont says he then approached a London silversmith firm by the name of "Rose" to make the three screen-used props from silver, plated with 18-carat gold. Colibri were later contracted to manufacture a number of additional, high-quality Golden Guns for PR use; according to Lamont, no Colibri-built Golden Gun was ever used in the movie itself.

In the movie, the components of the weapon are carried by Scaramanga at all times save when he is partaking in a duel with another professional killer, disguised as a series of apparently innocuous items. The "gimmick gun" is made from four major components, largest of which is a cigarette case which forms the grip with the open lid forming the trigger group; opening the lid reveals a locking mechanism on top of the case. The cigarette lighter features a slide-out section in its base, while the lid is used as the loading port and (in fiction) to cock the hammer; the side of the lighter engages with the locking mechanism on the cigarette case to secure the two parts together. A pen with a removable end cap covering a threaded base screws into the slide-out section of the lighter to form the barrel. Finally, a cufflink screws into the underside of the trigger group to form the trigger itself. The bullets are stored in Scaramanga's belt buckle.

The seperate parts of the gun are not sections of the prop weapon in scenes where Scaramanga uses them normally; the cigarette case and lighter are replaced with their commercially available equivalents (both prop parts being modified from or based on existing Colibri products), as the cigarette case body is blocked shut by the locking mechanism and the lighter is gutted of all internal parts to make room for the sliding section; the prop lighter is also elongated somewhat as the stock version is not long enough to cover the top of the cigarette case. The prop's trigger does not function as a cufflink, and Christopher Lee wears a set of real cufflinks as part of his costume which are made to resemble the prop gun's trigger. The hollow prop barrel is rather obviously useless for writing, and as above is replaced with a real Waterman fountain pen.

The assembled gun is a single-shot, breech-loading pistol; Scaramanga typically only uses a single bullet for each hit, as he is famous for always hitting his mark. In the film it is said to fire made-to-order 4.2mm rounds with 20 gram (~308 grain) gold-nickel bullets. While this may seem unreasonably heavy, gold is almost twice as dense as lead, and 20 grams equates to just over one cubic centimetre of gold. Since the bullet is over twice as heavy as an M80 7.62mm NATO rifle bullet, the Golden Gun would require some type of exotic propellant with special high-pressure casings to actually make it go anywhere, and would kick like a particularly angry mule. The bullets actually shown in the movie are .25 ACP or .32 ACP cases fitted with pointed rifle bullets.

The Golden Gun has appeared in the following: