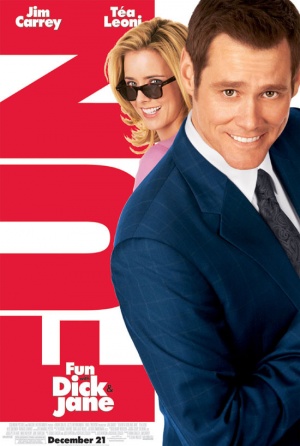 Fun with Dick and Jane is the 2005 remake of the 1977 comedy of the same name that starred George Segal and Jane Fonda. Jim Carrey and Téa Leoni star in the remake as Dick and Jane Harper, a middle class couple who after losing their means of income, decide to turn to a life of crime in order to maintain their lifestyle.

The following weapons can be seen in the film Fun with Dick and Jane:

Dick Harper (Jim Carrey) borrows his son's water gun and uses it during the robberies. Once his wife, Jane (Téa Leoni) is also seen with the water pistol, while playing with their son, Billy. The water pistol resembles a SIG-Sauer P226. The fact that it is never seen firing, the removable magazine, and its small size strongly indicate that it is not a real water pistol, but an airsoft or other prop gun.

Dick shows his son's water gun to his wife.

The water gun gets stuck in Dick's pocket during his very first robbery.

"Okay, hon. These are nonfat muffins. Get some of these."

Jane holds the water gun while playing in the garden.

A close-up of Dick's water gun.

Policemen are seen with Beretta 92FS pistols when they apprehend the (real) bank robbers.

The police sergeant (Peter Weireter) is armed with the Beretta as he enters the bank and the robbers surrender themselves.

A Beretta 92FS visible in the cop's holster.

Oz (Carlos Jacott) uses a Mossberg 500 Cruiser with low-cap tube when he and his wife rob a bank, before Dick and Jane could do it.

Oz with the Mossberg.

Debbie adjusts her mask while holding the 590 Cruiser with Mariner finish.

Debbie tries to run away from the police...

Jack McCallister (Alec Baldwin) fires two shots from an unknown 12 Gauge Over/Under Shotgun during an interview. His hunting partner is also seen with an O/U shotgun.

Jack McCallister holds the shotgun in a news report.

Jack fires the shotgun, and misses both shots.

A SWAT officer with an MP5A2.

An MP5 with fixed stock circled in red.
Retrieved from "https://www.imfdb.org/index.php?title=Fun_with_Dick_and_Jane_(2005)&oldid=871909"
Categories: