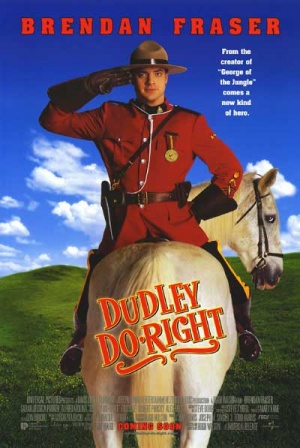 The following weapons can be seen in the film Dudley Do•Right:

Several of the henchmen employed by Snidely Whiplash (Alfred Molina) use the SIG-Sauer P226 throughout the movie. 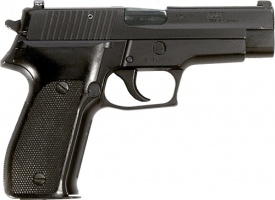 Some of Whiplash's henchmen stick up the bank teller with their SIGs.

Some of Whiplash's own henchmen hold their SIGs on him out of distrust.

Other henchmen are seen with the Beretta 92FS.

Some of Whiplash's henchmen stick up the bank teller with their Berettas.

Some of Whiplash's own henchmen hold their Berettas on him out of distrust.

Seen in the hands of one of Whiplash's henchmen when they raid the Indian village.

Snidely Whiplash (Alfred Molina) uses a revolver with an unusually large barrel to rob a bank with his henchmen in the beginning of the film.

Whiplash, mastermind of the heist, holds his revolver on the teller.

Snidely Whiplash (Alfred Molina) uses this to 'plant' fake gold in the waters to make the townspeople think that there's actually gold that can be found in them.

Snidely Whiplash (Alfred Molina) fires the shotgun which was loaded with what seems to be 12 gauge shells full of fake gold into the waters.

Snidely Whiplash's shotgun is seen in the distance.

A Remington 870 shotgun fitted with a stock, heat shield, pistol grip, flashlight and Butler Creek tactical foregrip is seen used by a henchman as he gets crushed by the boulder. This particular Remington 870 also appeared in the movies Timecop, Crying Freeman, and Reindeer Games, as well as some other movies and TV shows filmed in British Columbia.

The henchman seen with the Remington as he tries not to get crushed by the boulder.

One of Whiplash's henchmen is seen with a full-size Uzi guarding the territory where Whiplash is having gold shipped and he later arrives.

The henchman with the Uzi going into battle.

Dudley Do Right (Brendan Fraser) is seen armed with the M1928 Thompson submachine when inspecting a noise at his area and during his assault on the gold mine.

Dudley Do Right (Brendan Fraser) is seen armed with the M1928 Thompson submachine during his assault on the gold mine.

Dudley carves his initials into the wall with the Thompson.

One of Whip's henchmen can be seen with an MP5 only to fan away the 'fireworks' that were launched at them by Dudley (Brendan Fraser) and the 'Indians'.

The henchman with the MP5 going to face off against Dudley and the Indians in the final battle.

Once they arrive ashore, a henchman can be seen wielding one of these whilst rounding up the rest of them to continue pursuit and then first getting hammered by the media and the press. 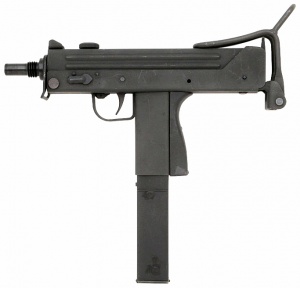 The henchman further to the right is seen with the SWD.

Seen in the hands of Whiplash's henchmen. Some of the M16A1 rifles have the A2 handguard on them and some have the M203 40mm grenade launcher fitted under the barrel.

The henchman standing on the boat while carrying the M-16.

The henchmen fire their M16s.

The henchmen go into battle with their M16s.

Seen in the hands of one of Whiplash's henchmen when he was running away from a massive boulder.

The henchman with the Remington as he's being chased by the boulder.

The henchman on the right prepares to go into battle with his Browning.
Retrieved from "https://www.imfdb.org/index.php?title=Dudley_Do-Right&oldid=1378701"
Categories: