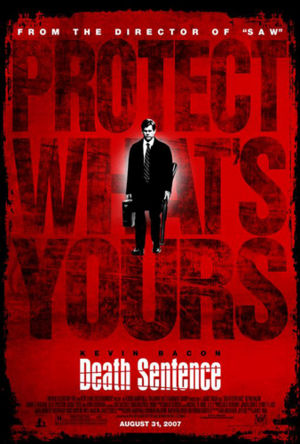 Death Sentence is a 2007 thriller starring Kevin Bacon as a man pushed over the edge when his family is brutally attacked by a vicious gang. The film was directed by James Wan (Saw) and was based on the novel of the same name by Brian Garfield, who wrote it as a sequel to his book Death Wish, which was made into the 1974 Charles Bronson film.

The following weapons were used in the film Death Sentence:

Nick Hume (Kevin Bacon) chooses a double-barrel 12 gauge Rossi Overland shotgun as his primary weapon in his revenge mission against Darley's gang. The Rossi Overland is typically seen with 20 inch barrels, this is the 26 inch barrel variant. 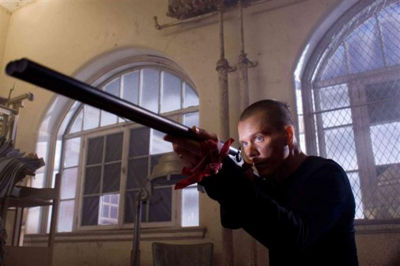 A production image of Nick Hume (Kevin Bacon) with his double-barreled 12 Gauge Rossi Overland shotgun inside the office.

Nick gets familiar with his Rossi Overland shotgun.

A couple of 12 Gauge Mossberg 500 Persuader shotguns can be seen in the hands of Billy Darley (Garrett Hedlund) and another gang member in the murder scene at the gas station, it is used by Billy to blow away the clerk when he goes for his .38 Smith & Wesson Model 64 revolver. It can also be seen in the hands of Jamie (Dennis Keiffer) in the battle inside "The Office".

Billy shoots the clerk with a Mossberg 500.

Billy and another gang member with their Mossberg 500s as they flee the gas station.

A sawed-off pistol gripped Remington 870 shotgun can be seen in the hands of Baggy (Kanin J. Howell) during the raid on the Hume residence and again in the scene at "The Office" near the end shortly before Nick kills him with his Rossi Overland shotgun.

Baggy fires his 870 at Nick as he runs upstairs.

Baggy pumps another round in his shotgun.

Nick Hume (Kevin Bacon) decides on a Colt M1991A1 pistol as his main sidearm after purchasing it from Bones (John Goodman). Another M1991A1 can also be seen in the hands of the gang member known as Tommy (Freddy Bouciegues) who fires it multiple times at Nick in the parking garage. It is most likely the same prop being reused. 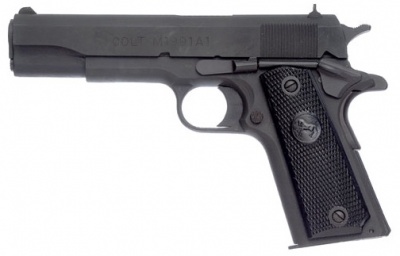 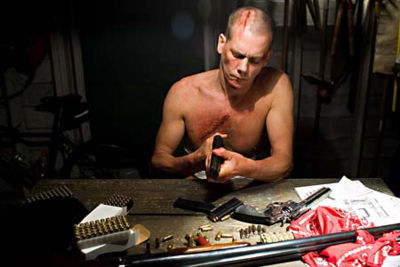 Tommy fires his M1991A1 at Nick as he jumps into a Ford Taurus for cover.

Bones sets down the M1991A1 alongside the Colt Python

Nick loads up several mags of the M1991A1 with FMJ rounds.

Close up shot of the M1991A1 as Nick gets comfortable with it. Note the broken rear sight, a consequence of the hard life of movie guns.

Nick fires his M1991A1 at Billy in the final shootout.

Nick Hume (Kevin Bacon) opts for a Colt Python revolver with a 6 inch barrel and nickel finish as one of the two handguns he buys. He uses it to execute Billy Darley and Heco. 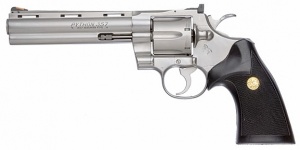 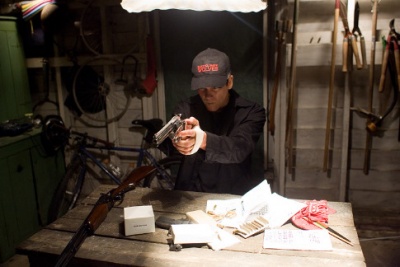 Promotional image of Nick Hume with the Colt Python, the M1911A1, and the Rossi Overland shotgun.

Bones sets down the Python for Nick to check.

After trying several types of ammo, Nick finally finds some that fits.

Good view of the Python as Nick gets familiar with it.

Nick executes Heco with the Python. Note the CG muzzle flash for the actor's safety.

Bones Darley (John Goodman) recommends that Nick Hume (Kevin Bacon) consider the Desert Eagle Mark VII for his vigilante needs. He refers to the Desert Eagle as the "sword of justice" and the "king of mayhem." Nick opts for a Colt Python revolver, an M1911A1, and a long 12-gauge Rossi Overland shotgun instead. 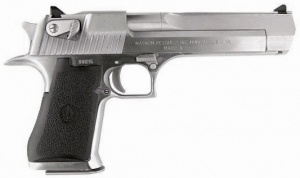 Desert Eagle MK VII - .44 Magnum w/ nickel finish. This is the exact version of Desert Eagle used in the film.

"And you got the king of mayhem. Half cannon, sword of justice. Take this f****r to the Holy Land start your own crusade." Bones Darley shows off the Desert Eagle to Nick.

Bones sets down the Desert Eagle for Nick to check. He opts for the Python and 1911 instead.

Bones with the Desert Eagle as he ask Nick a question. 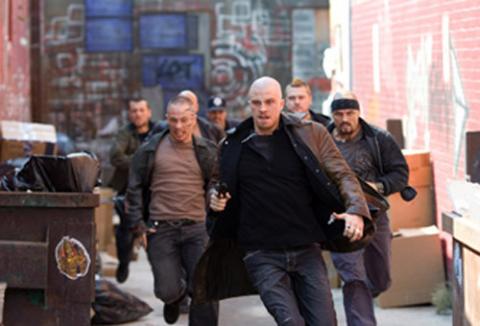 Billy with his 92FS as he and his gang run down the alley.

Billy with his Beretta 92FS as he tries to think of where Nick ran off to.

Baggy fires a Beretta 92FS at Nick as he approaches with his shotgun.

Billy fires his Beretta at Nick in the final standoff.

A Smith & Wesson 3000 Shotgun is seen in the hands of one of the gang members during the gas station scene and during the raid on the Hume residence and finally in the shootout at "The Office.

A gang member with his shotgun in the gas station scene.

A gang member with his shotgun in the Hume residence.

A gang member with his shotgun at "The Office".

Bodie (Edi Gathegi) is armed with a SIG-Sauer P226 throughout much of the film, specifically near the end during the shoot-out in "The Office". The P226 can also be seen on Heco's (Hector Atreyu Ruiz) coffee table when Nick (Kevin Bacon) busts in and prevents him from accessing it however with a blast from his Rossi Overland shotgun to the table. 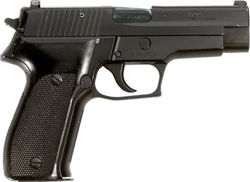 Bodie draws his SIG-Sauer P226 as he prepares to shoot Nick in the street.

Heco with a P226 as they see a Ford Taurus drop off the top of the parking garage.

Bones Darley (John Goodman) is seen with a Colt Gold Cup National Match Enhanced as his son Billy drops off the money from the drug sales. 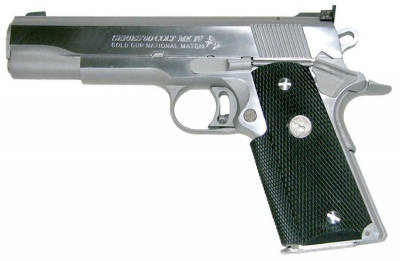 Bones ejects several rounds at Billy for the money being light from last nights deals. Note the slanted slide serrations.

Detective Wallis (Aisha Tyler) carries a Glock 26 pistol as her sidearm throughout the film, it can be seen out of the holster and in her hand as she approaches the Hume residence near the end of the film. 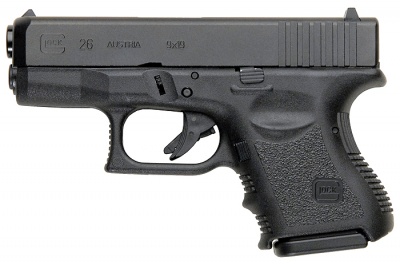 Detective Wallis with her Glock 26 drawn.

Spink (Leigh Whannell) can be seen pulling a MAC-10 off the dash of his parked van upon noticing Nick Hume speeding toward the van in the Plymouth Duster. He has no time to get off a shot however. It can also be seen on the wall of Bones' safe when Mr. Hume is buying weapons from him.

The clerk at the gas station scene attempts to reach for his Smith & Wesson Model 64 snubnose revolver that he kept behind the counter before Billy kills him with his Mossberg 500 Persuader shotgun. 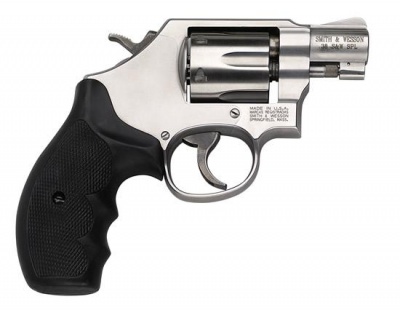 Bones shows Nick a safe full of weapons for purchase, which includes the following:

The stainless version of the SIG-Sauer P229R can be seen on the wall inside Bones' vault when Nick goes to purchase weapons. 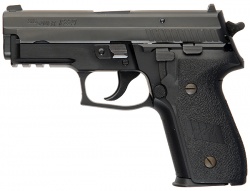 A two-tone Glock 19 with the slide chromed can be seen on the inside wall of Bones' gun vault in the scene where Nick Hume goes to buy weapons. It is also the sidearm of the Columbia Police Department in the film.

A Taurus PT945 pistol can be seen on the inside wall of Bones' gun vault in the scene where Nick Hume (Kevin Bacon) goes to buy weapons. 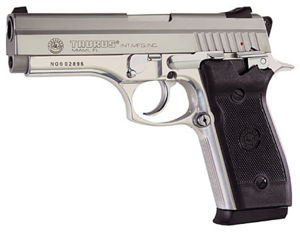 A Remington 870 can be seen on the rack inside of Bones' gun vault in the scene where Nick Hume goes to buy weapons.

A Cobray Street Sweeper can be seen on the rack inside of Bones' gun vault in the scene where Nick Hume goes to buy weapons.

A Ruger Mini-14 can be seen on the rack on the door inside of Bones' gun vault in the scene where Nick Hume goes to buy weapons.

An Uzi Carbine can be seen on the rack on the door inside of Bones' gun vault in the scene where Nick Hume goes to buy weapons.

A Pietta Bingham PPS-50, a .22 LR AR-7-based rifle in style of the PPD-34, can be seen on the rack on the door inside of Bones' gun vault in the scene where Nick Hume goes to buy weapons.

A Beretta 92FS Inox can be seen on the inside wall of Bones' gun vault in the scene where Nick Hume goes to buy weapons.

After the weapons are purchased, Bones also gives Nick several pistol manuals, however, it appears that the top manual is for a Heckler & Koch P9S, not one of the pistols that was bought. Also, Bones gives Nick several boxes of 9mm ammunition, despite the fact that the pistols that were purchased were a .45 ACP M1991A1 and a .357 Magnum Colt Python.

Bones hands over the manuals and boxes of ammo to Hume. Note the manual, which is clearly for a P9S.
Retrieved from "https://www.imfdb.org/index.php?title=Death_Sentence&oldid=1538350"
Categories: