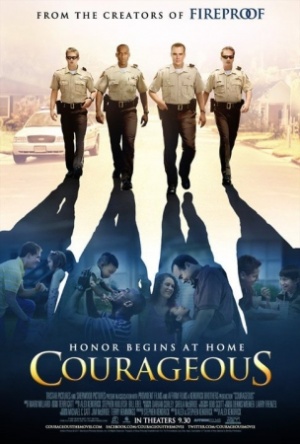 Courageous is a 2011 Christian drama produced by Sherwood Pictures that focuses on four Christian police officers who encounter troubled times in the wake of a tragedy and seek God in order to face their ordeal and to create a stronger relationship with their families.

The following weapons were used in the film Courageous:

The officers in the film all carry the Glock 17 pistol as their primary sidearm.

A gangbanger is seen firing a Smith & Wesson 639 "gangster style". 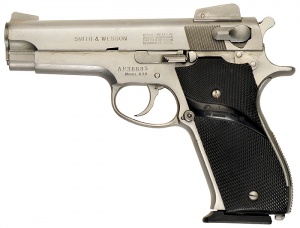 A Remington M40A3 bolt-action rifle is seen on a table at a firing range.

M40A3 seen on a cradle at the range

A Remington 870 Police Magnum shotgun is seen laying on a table next to the M40A3.

A gangbanger is seen with a sawn-off Mossberg 590 Compact Cruiser.

Gang leader firing the Mossberg. Note the lack of a stock, making it the "Compact Cruiser" model.

Shane Fuller (Kevin Downes) uses the Taser X26 to subdue a suspect after a long chase.

Better view of the X26
Retrieved from "https://www.imfdb.org/index.php?title=Courageous&oldid=1289738"
Categories: