The following weapons were used in the film Cold War:

Note: In real life, the SIG-Sauer P250 Compact (DCc) is the standard sidearm of HKPF officers in the criminal investigation units, having replaced the Colt Detective Special revolver. 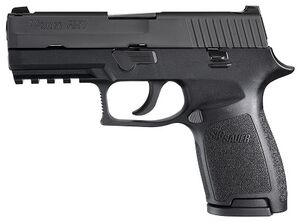 Deputy Commissioner Lau fires his sidearm after being ambushed on the highway.

Lau runs out of ammunition for his P250.

Lee holds out the handgun to his son.

A kidnapper is briefly seen with a SIG-Sauer P228 while moving the hostages to another location.

The hostages are moved by the kidnappers.

Glock 17 pistols with tactical lights are used by Special Duties Unit (SDU) officers when they storm a ship looking for the hostages and later while confronting the kidnappers in an office tower.

In reality, the Glock 17 pistols in the force were equipped with an Insight M3 Tactical Illuminator since the 1990s. This setting was used by several units in the force including the Special Duties Unit (SDU), Airport Security Unit (ASU) and the Marine Police (MP). 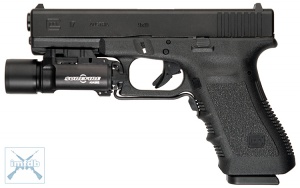 A SDU officer with a Glock 17 opens a hatch.

SDU officers react to an explosion.

A Remington 870 shotgun with a tactical light is used by Chan Bun when he ambushes Deputy Commissioner Lau on a highway.

Bun blasts Lau's taxi with a round from his Remington 870.

A HKPF officer wields a Heckler & Koch MP5A2 while searching a suspicious vehicle.

An officer gets out of a police cruiser with a MP5A2 in hand.

SDU officers are mostly armed with Heckler & Koch MP5A3 submachine guns with Surefire dedicated weaponlights. A kidnapper also uses one in the final shootout after retrieving it from a fallen SDU officer.

A kidnapper fires a captured MP5A3.

Some of the SDU operators, most notably Commander Michael Shek (Andy On), use M4A1 carbines. The M4A1s are all equipped with foregrips, tactical lights, Magpul CTR buttstocks and Aimpoint red dot sights.

A closeup of a M4A1 Carbine. Note Ambi-selector.

The kidnappers use an AKS-47 rifle to threaten the hostages, and later while ambushing Deputy Commissioner Lau on the highway.

The kidnappers threaten a hostage with an AKS-47.

A kidnapper fires an AKS-47 from his van.

The kidnapper covers his comrade as he hijacks another car.

The kidnapper fires his AKS-47 at Superintendent Tsui's approaching car.

SDU snipers use an Accuracy International Arctic Warfare sniper rifle to cover the assault teams when they raid a ship looking for the hostages.

An Accuracy International AW is positioned near the ship.

The kidnappers use a launcher to fire a smoke grenade into a police van.

The kidnappers fire a smoke grenade.

The kidnappers use a cache of high-grade fireworks as improvised rocket launchers to fend off Michael's SDU team during the climatic gun battle. In real life, fireworks are illegal to possess without a permit from the government.

A SDU entry team is blasted by a cartload of fireworks.
Retrieved from "https://www.imfdb.org/index.php?title=Cold_War&oldid=1429850"
Categories: