Chinatown is the 1974 noir classic directed by Roman Polanski and starring Jack Nicholson as Jake Gittes, a former war hero and Los Angeles private investigator in the late 1930s who uncovers a conspiracy while conducting surveillance on a city engineer for the Department of Water and Power . The film's cast included John Huston, Faye Dunaway, and Roman Polanski in a cameo role. The film would gain widespread acclaim, receiving eleven Academy Award nominations with one win for Robert Towne for Best Original Screenplay. Nicholson would reprise his role as Gittes in the 1990 sequel The Two Jakes, which he also directed.

The following weapons were used in the film Chinatown:

Gittes disarms Claude Mulvihill (Roy Jenson) of a Colt Detective Special when the two fight at the retirement home. LAPD Det. Loach (Richard Bakalyan) also draws one during the climax in Chinatown.

Escobar reholsters his revolver (not a very clear shot but the only one with a semi close-up of his revolver).

Evelyn Mulwray (Faye Dunaway) draws a Colt Model 1908 Vest Pocket during the finale in the Chinatown section of LA, using it to wound her father Noah Cross (John Huston). 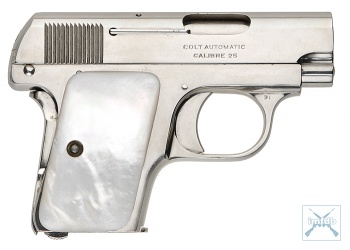 Evelyn holds her pistol on the police.

Evelyn tells Gittes that her father "owns the police" when he tells her to put the gun away and let the police handle the situation.

When J.J. Gittes (Jack Nicholson) goes to investigate the orange groves, he is shot at by farmers with double barreled shotguns who mistake him for one of the Water Department's men.

A farmer damages Gittes' car with a shot.

The oldest farmer holds his shotgun as he asks Gittes why he is in the valley.
Retrieved from "https://www.imfdb.org/index.php?title=Chinatown&oldid=1231608"
Categories: