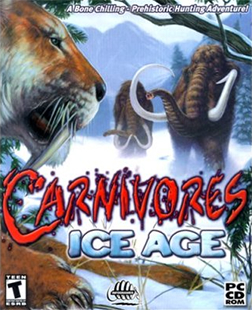 Carnivores Ice Age is the third game in the Carnivores franchise, having been released in 2001. Unlike the previous and later titles, where players duked it out with dinosaurs, Ice Age takes players to the dinosaur planet's polar caps, where they can hunt woolly mammoths, mega sized deer, and saber-toothed cats. It featured an advanced version of the Carnivores 2 engine, which allowed advanced particle effects, such as snowfall. Carnivores Triassic, a fan made entry for the franchise, also features the Ice Age engine.

A pistol that weakly resembles a Browning BDA (judging by the slide and overall shape) appears, much in the same way that it did in Carnivores 2. No changes have been made to it, but it can seem weaker in comparison as there are less weaker animals to hunt this time around. 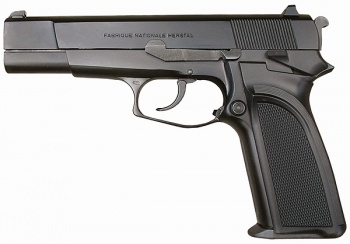 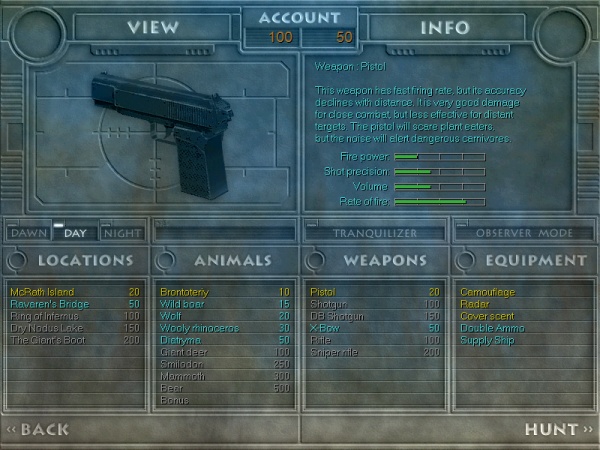 The Browning BDA on the select menu, identifiable by it's unique slide. Notice how the hammer seems to simply jut off of the back with no real rhyme or reason. It's possible that a toy was used as a base for the game's model. Also note that the menu is now blue, whereas the last game's menu was green. For some reason, all of the select screen weapons have a blue filter over them. None of them are actually blue ingame. 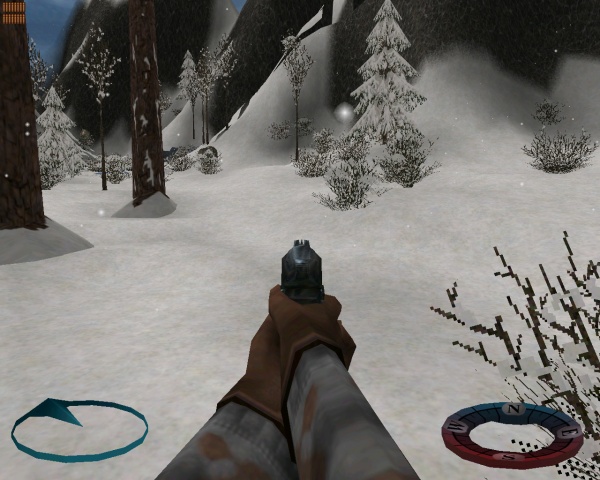 The Hunter notices that his BDA is roughly the same as it was in the last game. However, he has sleeves this time around, probably because it's cold out. 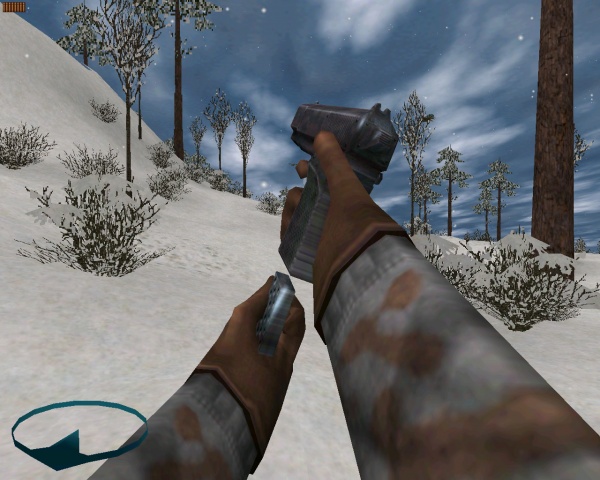 The Hunter reloads his pistol, which carries eight rounds per magazine. Note the flat gray texture on top of the magazine. A new feature of Ice Age is the ability to call in a supply ship to completely refill your ammo... If you survive that long.

What looks like a Remington 870 MCS Entry shotgun appears again as the game's shotgun. It's capable of firing buckshot (referred to as "buckshot pellets" ingame), and the weapon maintains some usefulness even at long range. The 870 is loaded via a seven-round magazine which, for some very odd reason, is loaded directly, and entirely, into the magazine tube. Coincidentally, conversions kits exist that can turn the 870 into a magazine fed weapon, but the magazine doesn't go there. 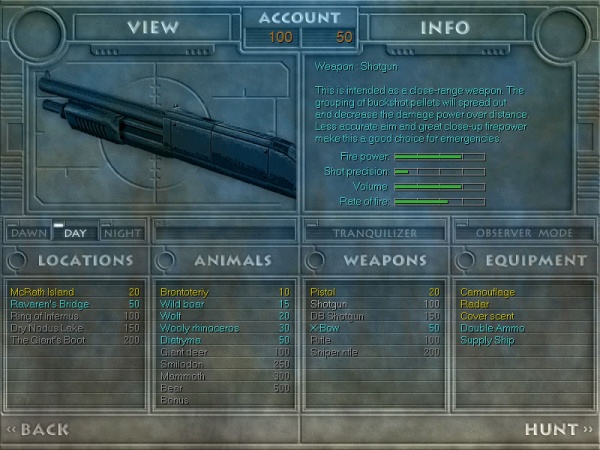 The Remington 870 on the select screen. It costs 100 points to use. Note the sights right behind the barrel, which differs from the image above, which shows a rail. Although it looks blue here, it appears exactly the same as it did in Carnivores 2. 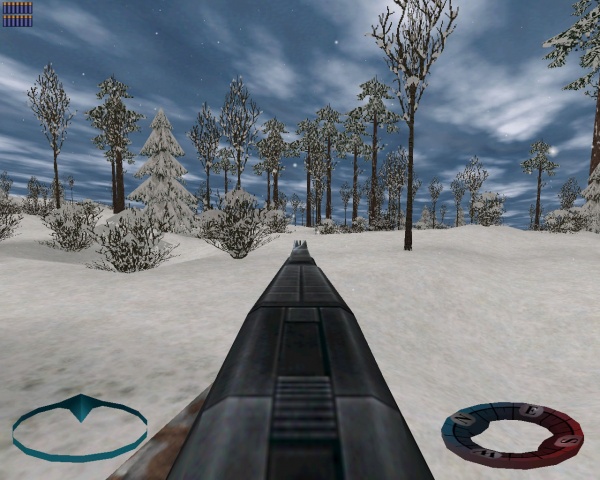 The Hunter checks out the 870's sights. 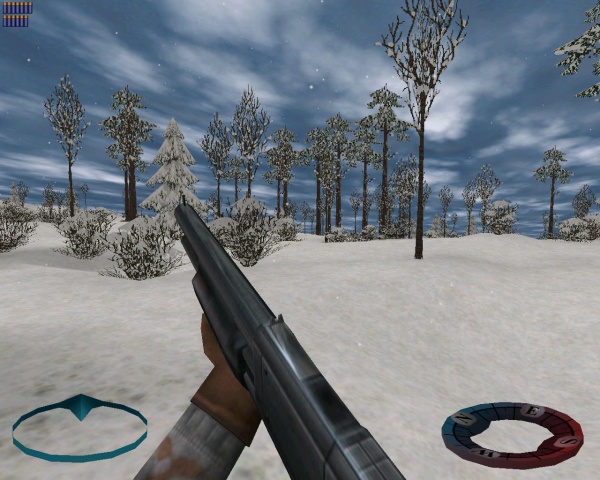 The Hunter pumps his shotgun in a dramatic fashion. 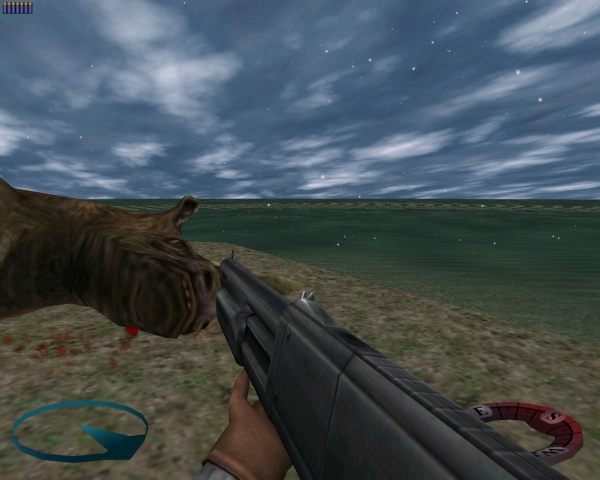 Crouching next to a dead woolly rhino, the Hunter reloads his shotgun. Though not visible in the still image, the prehistoric ungulate is still breathing, indicating that he was downed with some kind of buckshot tranquilizer.

A somewhat generic Double Barreled Shotgun appears in the game with what appears to be a mix of wooden and synthetic furniture. According to the gun's description, the shotgun is so loud that it can even scare certain carnivores away, such as the wolf. The shotgun best resembles a Stoeger/IGA Coach gun. 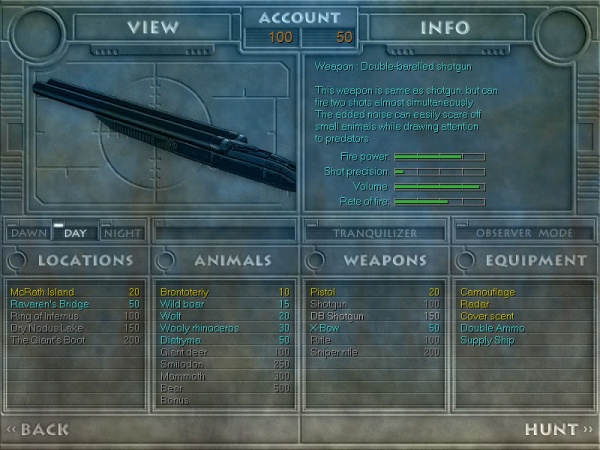 The select screen, which offers information on the shotgun. Like the other select screen long guns, no stock is visible. Note the word "Tranquilizer." Regardless of the type of weapon, this option will turn all weapons into nonlethal tranquilizer guns. Tranquilizing animals garners 15% more points for trophy animals, as opposed to outright killing them. 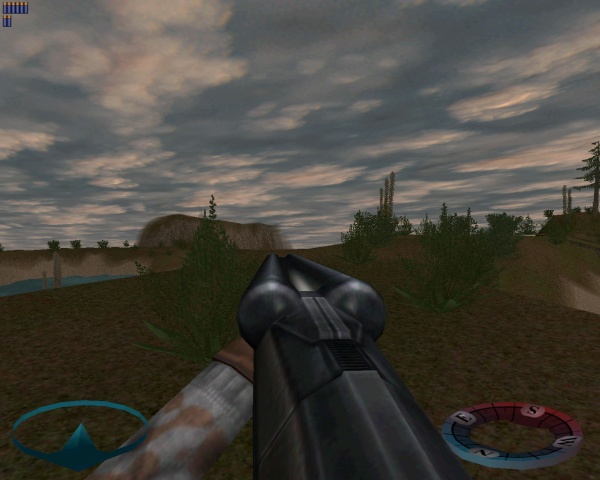 The Hunter draws his Double Barreled Shotgun, giving us a good look at the barrels. 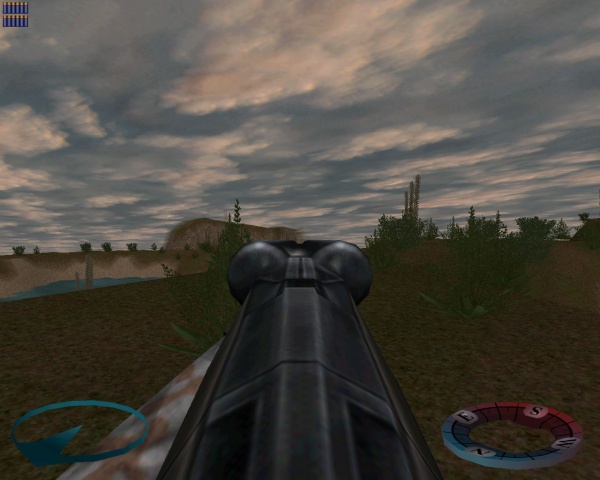 The Hunter aims down the sights, wondering if he'll be able to reload fast enough if his first two hits don't score. Note that, unlike the previous games, every huntable animal can kill you, the player. Even the deer. 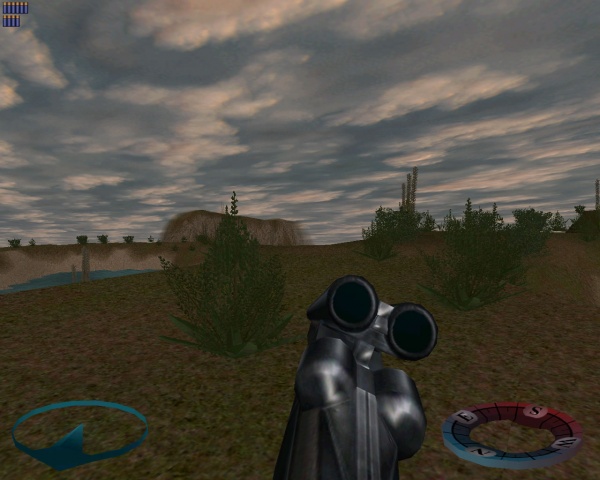 After blasting two quick shots at nothing, the Hunter ejects the spent casings... 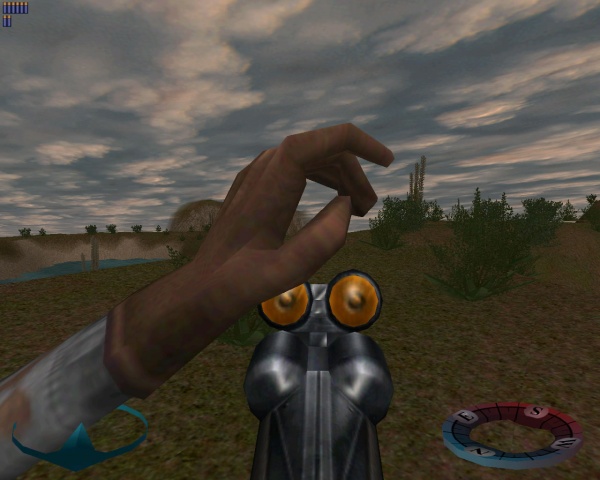 ...and places two fresh rounds into the chambers.

Some kind of generic Sawed Off Double Barreled Shotgun appears in the hands of poachers, enemies who were cut from the final release of the game. 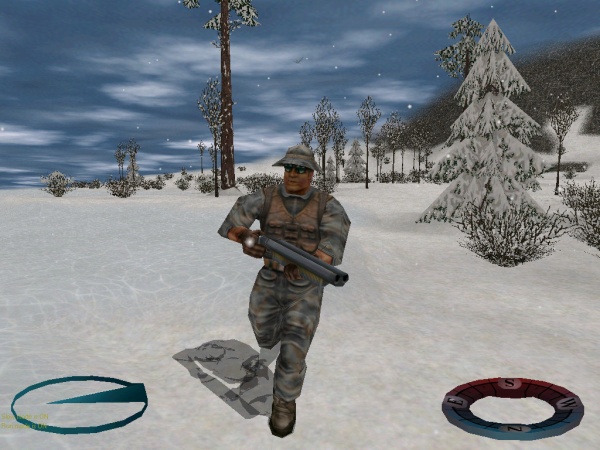 The Poacher was a scrapped enemy. Armed with a double barreled shotgun, his purpose was to start hunting you if you started to get good at the game and had amassed a sizable trophy collection. According to one of the devs, the enemy was scrapped for an unknown reason, but he remained in the game files, and with some tinkering, he can be reinstated. Note that his shotgun seems to be shorter than the one available to you, and that it doesn't seem to have much of a stock.

A weapon that appears to be similar to a Russian KS-23 appears in the game, called the 'Rifle.' In a way, this makes sense as KS-23 has a rifled barrel. Other than that, the weapon is treated as a hunting rifle, and not as a shotgun. The KS-23 is fed via a tiny magazine that is inserted straight into the handguard. A KS-23 with a longer barrel (compared to the non-scoped variant; the sniper variant seems to have the correct barrel length) and no ring sight is used as the select screen image of the 'Sniper Rifle,' although no actual ingame model for the scoped KS-23 exists. However, unlike the previous game, there is no scope to look through; there's just a green crosshair. 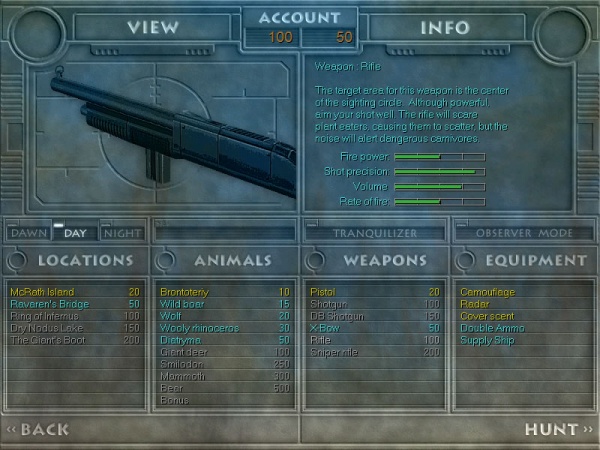 The select screen gives us the best look at what closely resembles a KS-23. 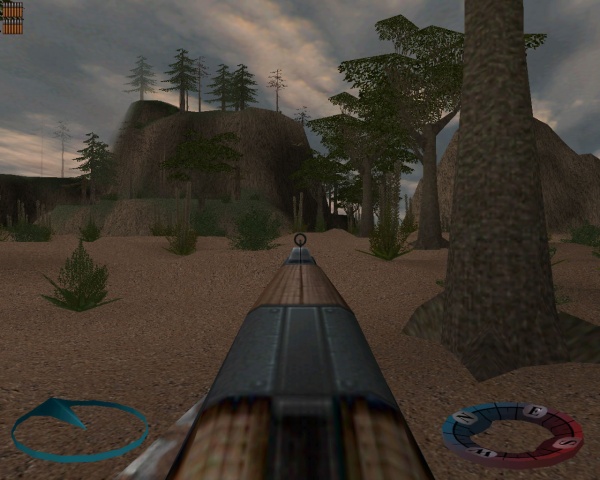 The Hunter aims down the sights of his KS-23. Note that each magazine holds seven rounds. A variant of the KS-23, the KS-23K, is actually fed via a seven round magazine. Unlike the previous version of this weapon, the Ice Age KS-23 appears to have some wooden furniture. It's the only gun in the game to have an updated look to it. 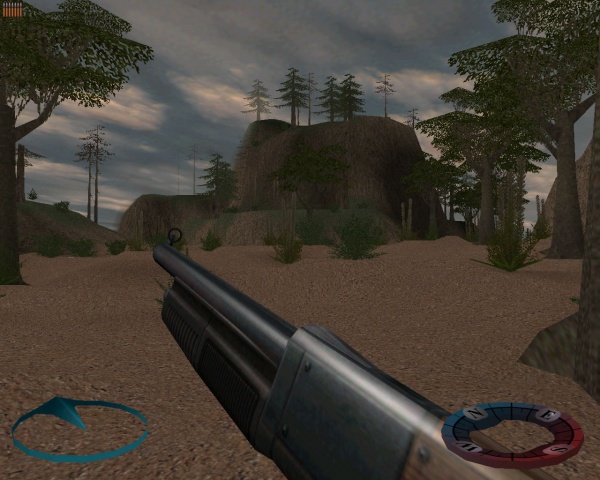 The Hunter reloads his rifle/shotgun after shooting some bushes in a map without snow. 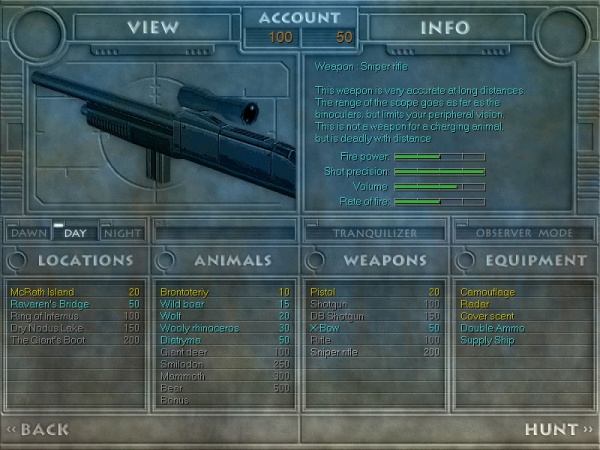 The scoped variant has a longer barrel with no sights, and a rather simple looking scope. Ingame, the player is given a green crosshair, and nothing else. In a way, this is an improvement, as it is now possible to see things coming from the sides.

Though not a firearm, the ever important X-Bow appears once again in the franchise. It seems a bit more powerful, and is useful for taking out low level trophy animals. 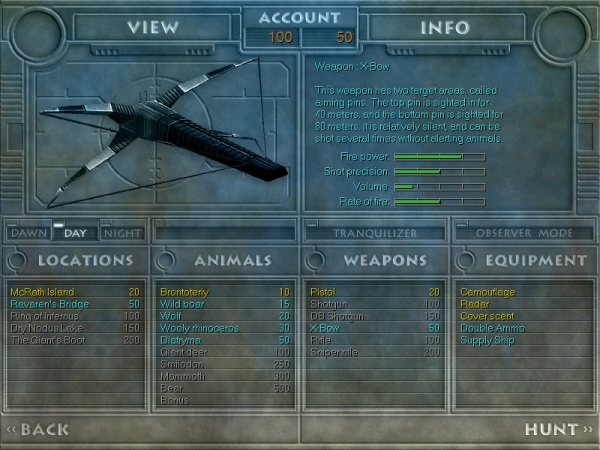 The select screen, which offers information on how to use the X-Bow. Note that there doesn't seem to be any way to hold or fire this weapon. 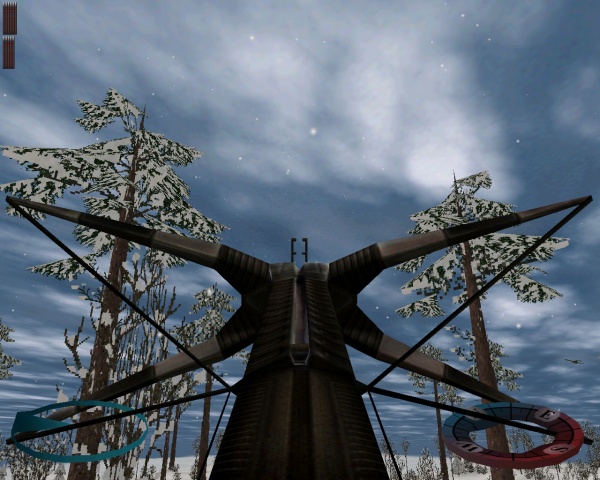 The X-Bow takes up a considerable portion of the screen.
Retrieved from "https://www.imfdb.org/index.php?title=Carnivores_Ice_Age&oldid=1103686"
Categories: