Beyond Borders is a 2003 drama starring Angelina Jolie and Clive Owen, directed by Martin Campbell (Goldeneye, Casino Royale). Filmed in Canada, Namibia and Thailand, Borders was commended by relief organizations for bringing attention to the plight of refugees and the efforts of relief workers, but it was not a critical or commercial success.

The following weapons were used in the film Beyond Borders:

Colonel Gao is not happy with Nick's contraband.

Gao threatens Nick with a TT-33.

Twice in one day.

The Chechnyans are seen with AKMSU carbines.

On the right, Chechnyan fires his AKMSU.

The Norinco Type 56 is used by Khmer Rouge troops while in Cambodia. These are early Type 56 rifles with milled receivers.

The milled receiver can be seen here.

These Type 56's retain the bracket for attaching the spike bayonets, but not the bayonets themselves.

Some of the Chechens are armed with Norinco Type 56 rifle Mocked up to resemble AK-74.

Vietnamese soldier with his Type 56-1.

The Chechens are also armed with Norinco Type 84S rifles.

In the scene where rebels beat back the mob at the food trucks, they switch to rubber Kalashnikovs.

This prop is missing the front sight.

The Khmer Rouge are also armed with SKS/Type 56 Carbines. There's not enough detail to tell the country of origin.

The SKS on the left. This SKS has the blade bayonet rather than the spike.

Vektor R5 (mocked up as Kalashnikovs)

The rebels in Ethiopia are armed with Vektor R5 rifles mocked up as Kalashnikovs.

Rebels roll up on the relief convoy.

The rebel leader demands food from the relief workers. There is a clear shot of the R5 receiver to his right.

An R5 slung on a rebel's back.

Some of the Chechens have Zastava M70AB2 rifles.

Chechen with his rifle.

The folding stock is extended.

Some of the Chechens have Zastava M70B1 rifles.

The two Chechnyans to the rear have Zastava M70B1 rifles.

One of the Khmer Rouge is armed with a PPS-43/Type 43 submachine gun. There's not enough detail to tell the country of origin.

Chinese Type 43 Submachine Gun - 7.62x25mm Tokarev. This is virtually identical to the Soviet Model save for markings.

A PKM machine gun is carried by the Chechens.

Chechen holds his PKM. An unidentified RPG can be seen left.

The Ethiopian rebels have a mounted FN MAG on their vehicle.

The shoulder stock is a giveaway.

One of the vehicles guarding the government convoy has a mounted Browning M2.

Browning M2 is seen on the jeep.

There is a DShK heavy machine gun at the Vietnamese checkpoint. 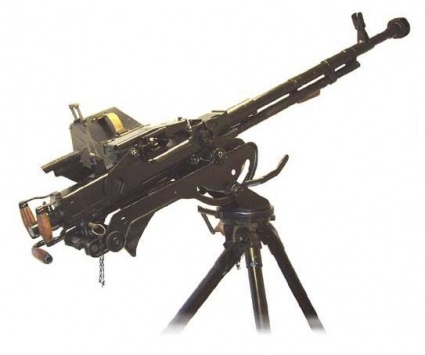 There is a DShK at the Vietnamese checkpoint.

Vietnamese soldier with the DShK.

Ma Sok tries to force the situation by giving a baby an F-1 hand grenade to play with.

The flaw in Ma Sok's plan, other than handing a live grenade to an infant, is that he STAYED IN THE ROOM.

A baby holds the grenade.

A baby pulled the pin out of the grenade.
Retrieved from "https://www.imfdb.org/index.php?title=Beyond_Borders&oldid=1164809"
Categories: