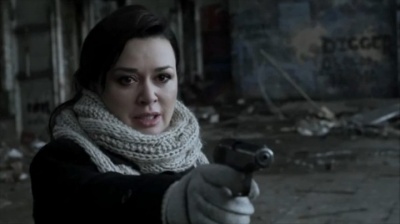 Anastasiya Zavorotnyuk aims an Makarov PM pistol as Anna in The House on the Edge (Dom na krayu) (2011).

Anastasiya Yuryevna Zavorotnyuk (born April 3, 1971 in Astrakhan) is a famous Russian theater, film and television actress of Ukrainian origin. She born in a family of actors, graduated from the Moscow Art Theatre School and became and actress under the direction of Oleg Tabakov. In addition to acting, Anastasia also acts as a moderator. Anastasia was married three times. Her first marriage was a German entrepreneur, but lasted only one year. Her second marriage was with Dmitry Strjukovim, and thei have two children. 22 September 2008 she married figure skater named Peter Tchernyshev.