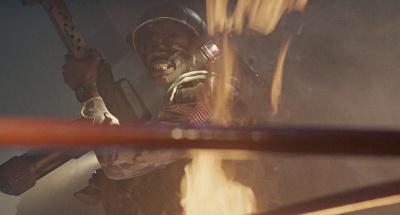 Alexander Basil Matthews (1942-2018) was an American actor and folk singer, best known for his role as Colonial Marine Sergeant Apone in James Cameron's 1986 film Aliens. Before beginning his acting career, Matthews served in the U.S. Marine Corps for six years, including during the Vietnam War, where he became the first African-American Marine in the 1st Marine Division to be meritoriously promoted to the rank of sergeant.

Subsequent film roles included General Tudor in The Fifth Element (1997) and Master Sergeant #3 in Tomorrow Never Dies (1997). He also reprised his role as Sergeant Apone for the video game Aliens: Colonial Marines (2013), which reunited him with his Aliens co-stars Michael Biehn, Lance Henriksen, and Mark Rolston.

Matthews passed away at age 75 on September 22, 2018, after being found unresponsive at his home in Orihuela, Spain.