Air America is a 1990 Vietnam War comedy directed by Roger Spottiswoode and stars Mel Gibson and Robert Downey Jr. as American civilian pilots who are employed by the CIA in a secret program that provided unofficial transportation of arms and goods into the country of Laos during the Vietnam conflict.

The following weapons were used in the film Air America:

A full-size Uzi is seen in the hands of Air America pilots Gene Ryack (Mel Gibson) and Babo (Tim Thomerson). The Uzi was officially adopted in 1951 by the Israeli Army. During this time period, the CIA purchased Uzis from FN in Europe and these were issued to special types, and there are reports of them being used by Air America/CIA personnel. Since the film takes place in 1969, it is not unreasonable that a gunrunner would be able to have one in Laos during the time of the Vietnam War.

"That sounds like a commercial - Excuse me, is that an Uzi?" Gene (Mel Gibson) shows off the Uzi to Billy (Robert Downey Jr.).

Jack Neely (Art LaFleur) carries a Walther P1, a post-war version of P38, fitted with a suppressor. He's seen firing it at an iguana and at a golf ball. 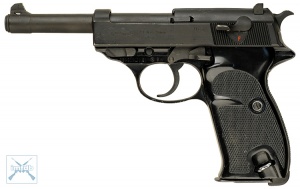 While on his miniature golf course, Jack Neely (Art LaFleur) carries a Walther P1 fitted with a suppressor.

Jack carries the Walther in the back of his waistband.

Laotian General Soong (Burt Kwouk) carries a very large revolver as his sidearm which appears to be a Smith & Wesson Model 19.

M16A1 rifles are arried by the soldiers under the command of Laotian General Soong (Burt Kwouk).

A Laotian soldier is seen carrying the M16A1 as they clear out the village to seize the poppy fields.

M1 Garand rifles also are carried by the soldiers of Laotian General Soong.

M1 Garands are carried by troops.

M1 Carbines are carried by the soldiers of Laotian General Soong.

Soong's men are armed with M1 Carbines as they raid a restaurant.

What appears to be a AK-47 rifles are seen in the hands of many characters in the film include NVA soldiers, Viet Cong guerrillas and Laos villagers.

An AK Variant is seen on the back of one of the men helping Gene load his weapons cache.

Air America pilot Babo (Tim Thomerson) carries what appears to be an AKS-47.

Babo (Tim Thomerson) is seen with an AK Variant as Gene tries to make a decision on whether to dump his shipment.

What appears to be Charleville Muskets are used by a Laotian tribe. During a confrontation, Gene points out the problem with even using Flintlocks in a tropical environment as the pan and frizzen are rendered unusable in the rain.

M60 machine guns are seen in the hands of Laotian troops and carried by Gene as he prepares to sell off his cache of weapons.

Gene loads an M60 into his plane as he prepares to make a final sale.

A Laotian peasant shoots down an Air America plane with his single shot shotgun at the beginning of the film.

A Laotian farmer unslings his shotgun to take a shot at an approaching Air America plane.

A Laotian soldier fires an RPG-7 at the rebels.

The RPG is fired.

A Mk II hand grenade is used by Gene to detonate a cache of arms.

A Mk II hand grenade is used by Gene to detonate a cache of arms.
Retrieved from "https://www.imfdb.org/index.php?title=Air_America&oldid=1216384"
Categories: