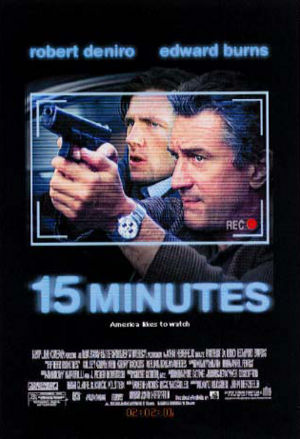 15 Minutes is a 2001 thriller directed by John Herzfeld and starring Robert De Niro as Eddie Flemming, a veteran celebrity NYPD detective who finds himself working with Jordy Warsaw (Edward Burns), an FDNY fire marshal in order to track down two criminals who videotape their assaults and let them be shown to the world through a tabloid television show hosted by flamboyant talk show host Robert Hawkins (Kelsey Grammer).

The following weapons were used in the film 15 Minutes:

The weapon of choice for Detective Eddie Flemming (Robert De Niro) and the rest of the NYPD is the 9x19mm Glock 17. The suspects Emil Roden (Karel Roden) and Oleg Razgul (Oleg Taktarov) fire Glocks as well in the film. In real life, the NYPD only authorizes the smaller Glock 19 for its officers, but in this movie, it seems the propmaster decided to go with Glock 17s instead.

Flemming (Robert De Niro) fires his Glock. He has a nice high grip and doesn't flinch as he pulls the trigger.

Det. Leon Jackson (Avery Brooks) pulls his Glock as he searches for Emil and Oleg.

Emil (Karel Roden) takes Jackson's Glock and his badge as Oleg looks on.

Angry at not getting any credit, Oleg Razgul (Oleg Taktarov) pulls a Glock and fires it at Emil. 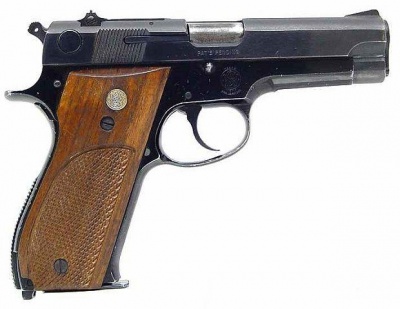 After he is suspended from duty, FDNY Fire Marshal Jordy Warsaw (Edward Burns) packs a Kahr K9 pistol with wooden grips as he confronts Emil at the end of the film. The Kahr K9's use in the film is confirmed by the Kahr website [1]. 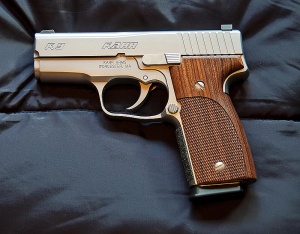 As Warsaw puts the Kahr K9 his waistband, the wood grips can be viewed.

Warsaw draws down on Emil with his Kahr K9.

Warsaw empties his weapon. The K9 appears to have changed to a Glock 19 painted to appear stainless (note the hooked trigger guard). This could possibly be due to the fact that they had a Glock converted to blank fire, but not a Kahr.
Retrieved from "https://www.imfdb.org/index.php?title=15_Minutes&oldid=1282551"
Categories: