Water is a 1985 British comedy movie directed by Dick Clement. Baxter Thwaites, British governor on the dreamy Caribbean island of Cascara, lives a peaceful life until one day the finest mineral water gushes from an old oil rig. Suddenly, all the world, including Americans, Cubans and French, has gone to the island. Disturbed in its tranquility sensitive, Thwaites develops a plan that gives the island independence.

The following weapons were used in the film Water (1985): 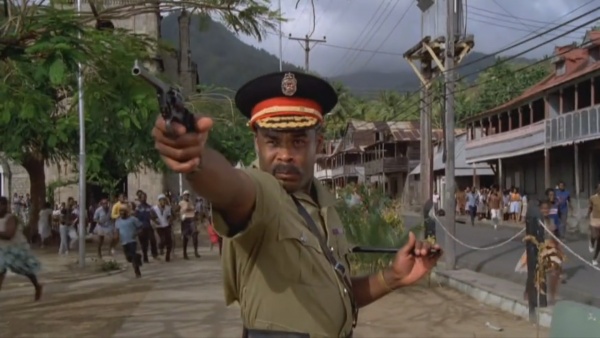 A Police officer fires his Webley at the two rebels.

Pamela Weintraub (Valerie Perrine) is briefly seen with a Browning Hi-Power pistol during the capture of the Spenco oil platform. 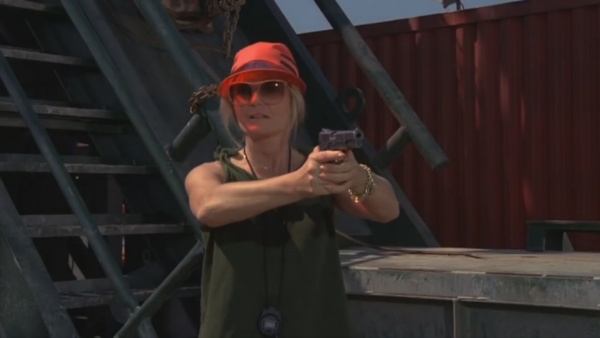 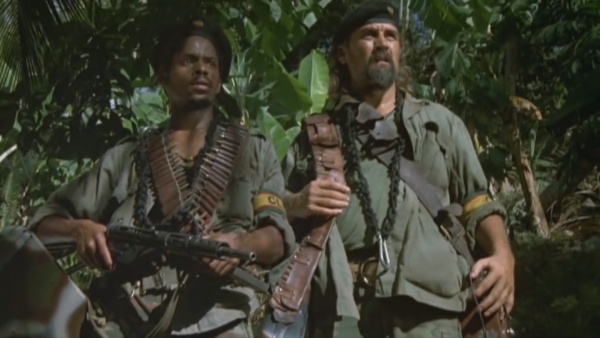 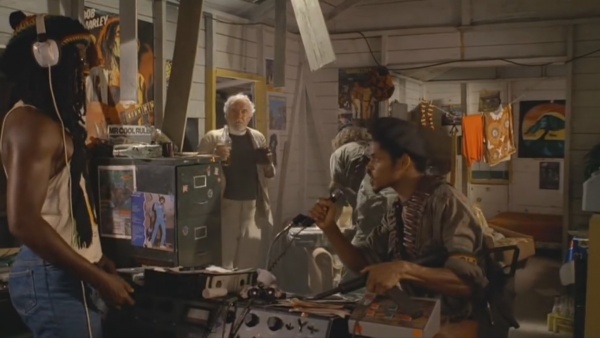 He holds it on Jay Jay. 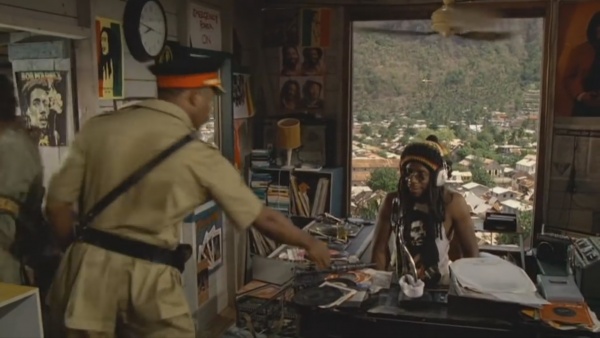 The Police officer takes the Sten. 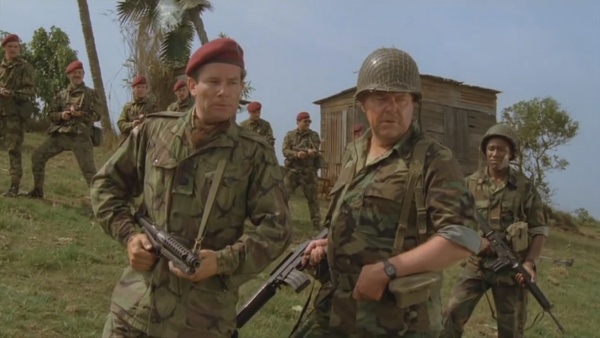 Charlesworth:"Major "Mad Dog" Hollister, isn't it? Sandy "Take No Prisoners" Charlesworth, SAS."
Hollister:"We'll have to move these civilians. Can't see the target for the limbo dancers."
Charlesworth:"Those are innocent bystanders." 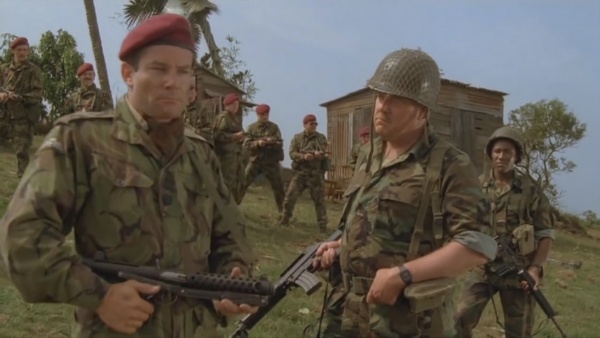 Hollister:"There's no such thing. They're all hand in glove with the gooks".
Charlesworth:"We are not in Vietnam now, Major. Those chaps carry British passports. If any of them have to die, it will be by a British bullet".

The Heckler & Koch MP5A3 is used by Kessler's (Paul Heiney) mercenary squad supported by the French. 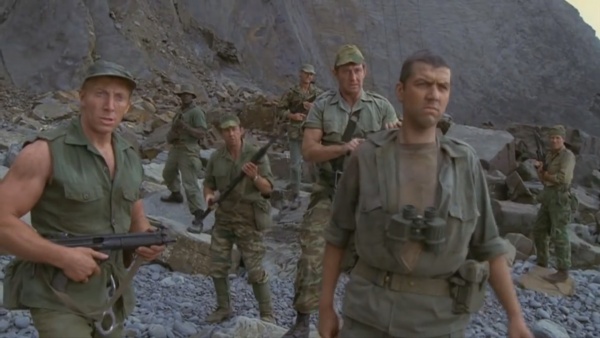 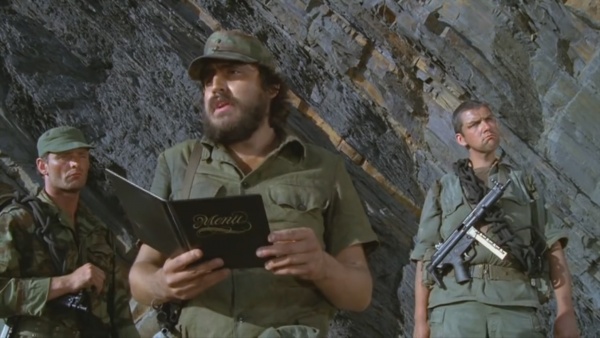 Kessler with his MP5A3 while Pierre (Alfred Molina) reading the menu. 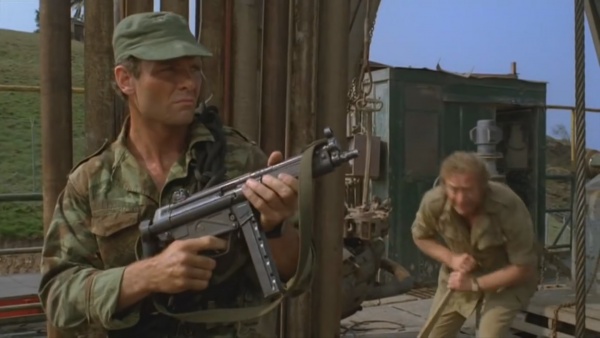 A mercenary holds the submachine gun. 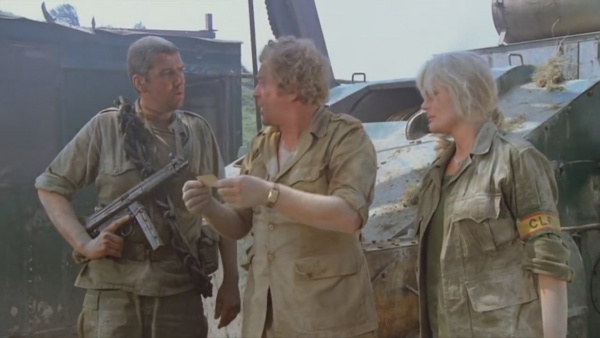 Kessler:"The water is destroyed, my mission is accomplished. If you have any need of an army, here is my card.". 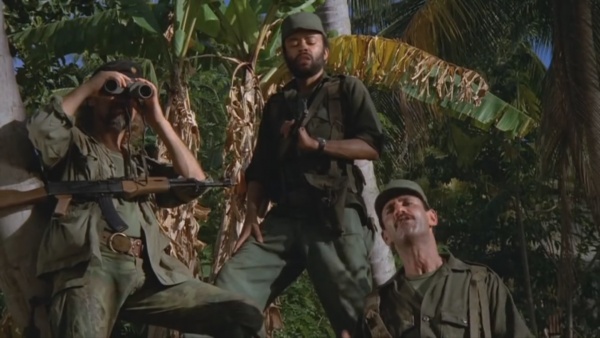 The Cubans and Delgado with their AP-80s. 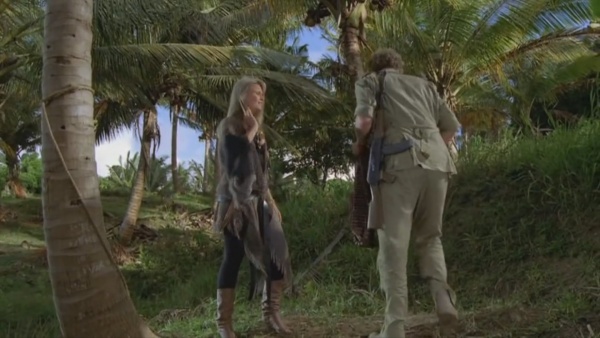 Baxter carries one over his back. 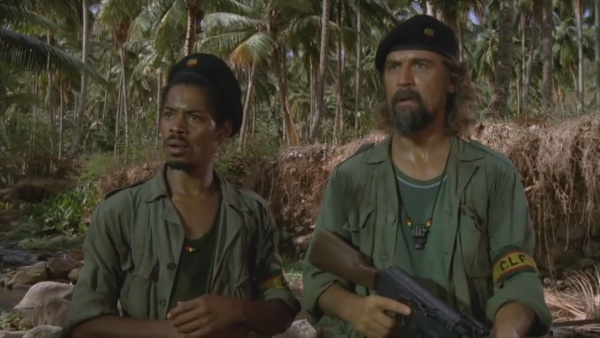 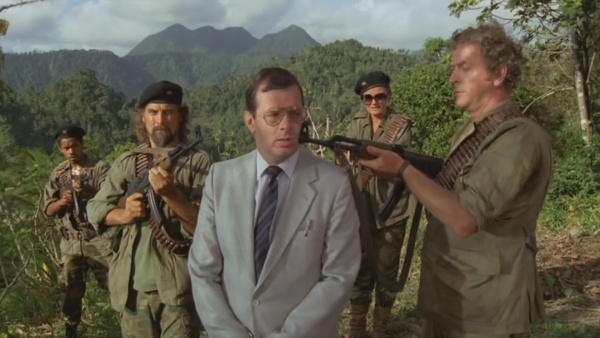 Delgado is later seen with an AK-47. 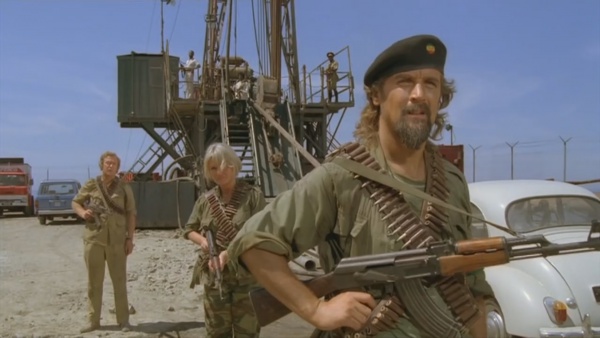 Soldiers of the 82nd Airborne Division are armed with M16 rifles. 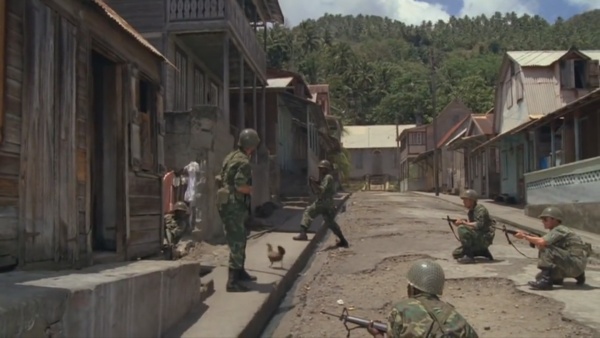 Baxter and Garfield are seen with Norinco Type 56 assault rifles. 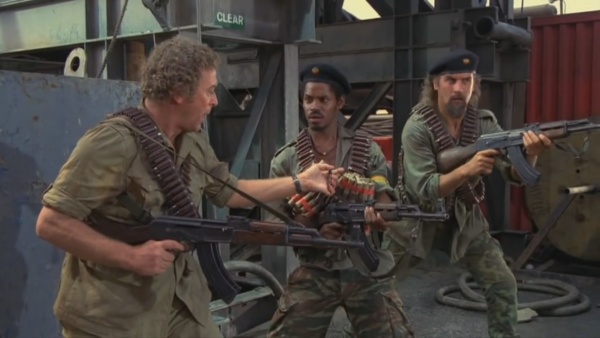 Baxter and Garfield hold their Norincos. 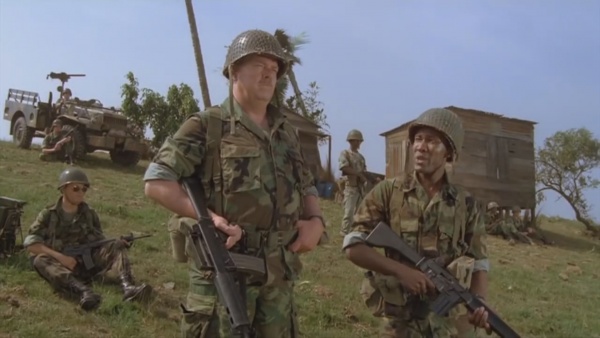 Major Hollister (middle) and the two soldiers hold the AR-180. 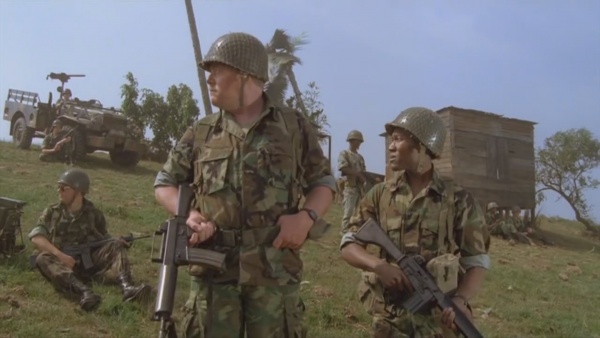 Another view of Major Hollister's AR-180.

A Browning M1919A4 is seen mounted on an American jeep. 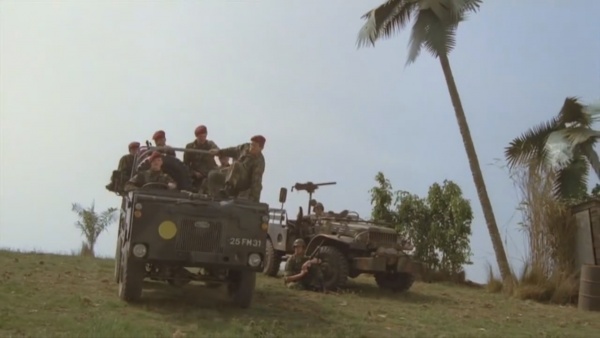 The jeep on the right with the mounted Browning.

One of Kessler's men carries a Franchi SPAS-12. 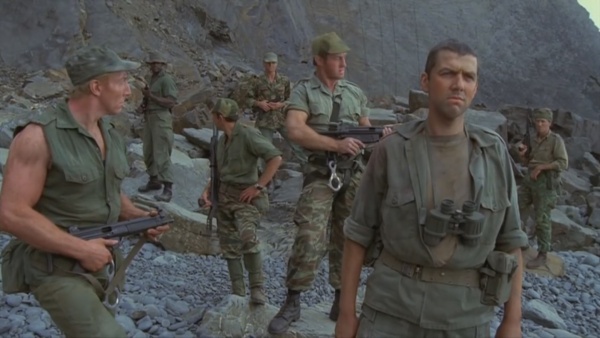 The mercenary in the middle. 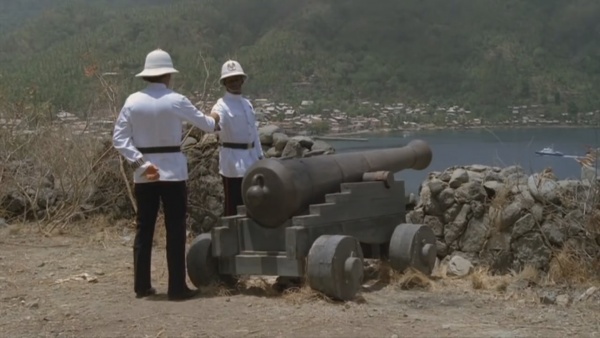 Type 69 RPGs are carried by the Cubans and Delgado. 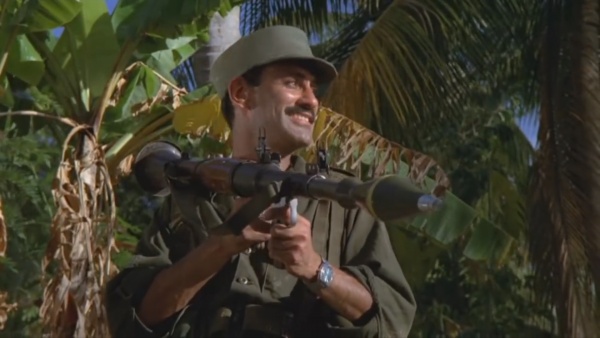 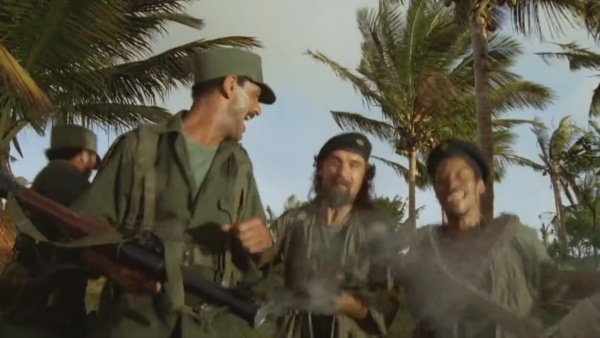 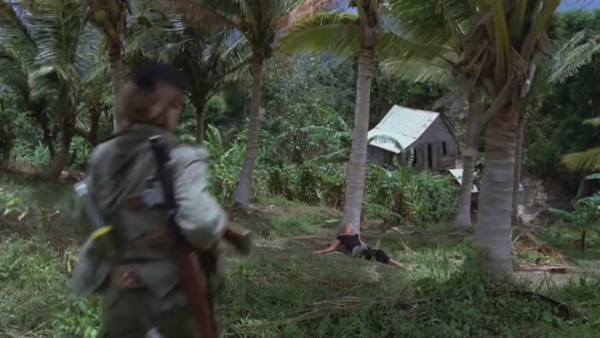