Dirty Harry is the 1971 crime film that introduced the character of "Dirty Harry" Callahan to movie audiences. Clint Eastwood stars as SFPD Inspector Callahan, who is assigned to head up the investigation to catch a serial killer who calls himself "Scorpio" and who threatens to kill a citizen of the city each day until his ransom demands are met. Directed by Don Siegel, Dirty Harry was the first in the film franchise and introduced the now iconic .44 Magnum Smith & Wesson Model 29 to motion picture fans.

The following weapons were used in the film Dirty Harry:

The now iconic revolver carried by Inspector "Dirty" Harry Callahan (Clint Eastwood) in the film is a Smith & Wesson Model 29, chambered in .44 Magnum. As the script originally called for a S&W Model 29 with a 4" barrel, this eventually proved troublesome for the filmmakers, since the Model 29 was no longer in production at the time. Before shooting began, Eastwood contacted Bob Sauer (then a representative for Smith & Wesson) to acquire the gun for the film. It was a challenge, but Fred Miller at the plant had a couple assembled from parts eventually. To better familiarize himself with the weapon's handling and recoil, Eastwood took one to a gun range and fired live rounds through it. Unlike the gun in the script, the only barrels acquired for the guns in this film were the 8 3/8" barrel and the 6 1/2" barrel. Both can be seen used in some scenes. The blanks it fired were custom made since the 5-in-1 blank didn't fit the chambers. It is said scriptwriter John Milius was presented with one of the actual guns used in the film as a gift later on.

As for Harry's line in the film about the .44 Magnum being "the most powerful handgun in the world", one should note that even in the 1970s, the .44 Remington Magnum cartridge had been eclipsed in size and power by the .454 Casull round, however, the first widely available commercially sold revolver chambered for the .454 Casull would not come for another ten years, so his statement for the time frame is accurate. 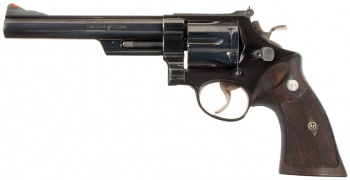 "Halt!"
Insp. Harry Callahan levels his Smith & Wesson 29 on robbers. It was hard to get a shot where he didn't look bad because he has a mouthful of hotdog.

Insp. Callahan checks his leg wound after being hit by a shotgun's birdshot. What's funny is that there are no holes in his pants and the "blood" appears to be red paint.

"I know what you're thinking. 'Did he fire six shots or only five?' Well, to tell the truth, in all this excitement, I've kinda lost track myself. But being as this is a .44 Magnum, the most powerful handgun in the world and would blow your head clean off, you better ask yourself one question: 'Do I feel lucky?' Well, do ya punk?"

Close up of Callahan's Smith & Wesson.

Callahan shows the punk he had indeed fired six shots. He cocks the hammer.

Due to continuity error, this alternate angle shows him pull the trigger in double action.

Callahan aims his Smith & Wesson Model 29 at the Scorpio Killer in the football field.

Callahan lowers his Smith & Wesson when Scorpio holds a little boy hostage but swings it back up to wound him and release the boy.

Callahan repeats his famous line as Scorpio tries to decide if he had fired six shots, or only five.

The Liquor Store Owner (James Nolan) shows the Scorpio Killer (Andrew Robinson) his Walther P38 pistol, which he brags he used to stop several attempted robberies. Unfortunately for him Scorpio hits him with a liquor bottle and takes the gun from him, and carries it up to the climax of the film. 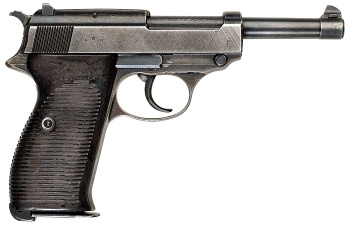 Walther P38 - 9x19mm. This is the actual screen used pistol carried and fired by Andrew Robinson in the film. Visible are machining marks and bluing flaws that can be seen clearly in the film, validating that it is the same pistol.

The Liquor Store Owner (James Nolan) shows Scorpio his Walther P38 in a manner not recommended, finger on the trigger, pointed at the person.

The Scorpio Killer hijacks the school bus by holding the driver at gunpoint.

Scorpio shoots at Callahan on the roof of the bus.

Scorpio reloading the P38 with a spare magazine taken from the liquor store drawer.

Scorpio holds his Walther P38 on a boy.

Insp. Chico Gonzalez (Reni Santoni) is seen using what appears to be a Colt Detective Special as his sidearm in the film, but both scenes when he fires it take place in almost complete darkness.

One of the robbers during the opening scene tries to shoot at Insp. Callahan (Clint Eastwood) with an unknown snub nose but is ultimately added to his body count.

Police patrolling the rooftops for the Scorpio Killer (Andrew Robinson) are seen with unknown revolvers in their holsters.

These are likely either Colt Pythons or Colt Troopers as SFPD officers used both during the period and both are seen being used by SFPD officers in the following films, particularly Pythons in the next film, Magnum Force. 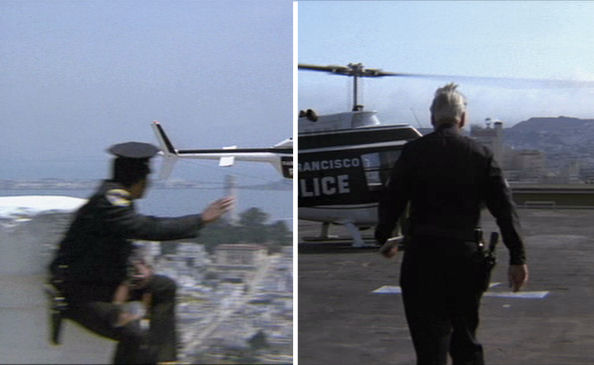 SFPD have unknown revolvers in their holsters.

A Winchester Model 70 chambered in .458 Winchester Magnum is used by Insp. "Dirty" Harry Callahan (Clint Eastwood) in a failed attempt to kill the Scorpio Killer on the rooftops over looking the church. The .458's parabolic trajectory and immense recoil would make it an exceedingly poor choice for use as a long distance counter-sniper rifle, but it is consistent with Callahan's preference for massive overkill.

Screen used Winchester Model 70 chambered in .458 Winchester Magnum. This is the screen used rifle carried and fired by Clint Eastwood in the film.

Callahan is presented the .458 Magnum Model 70 by The Chief (John Larch), which is said capable of killing an elephant. For someone like Callahan, this is an obvious choice since "overkill" is pretty much his middle name.

Callahan fires the Model 70 at the Scorpio killer. This gun's maximum capacity is 3+1 yet he manages to fire off six shots in total without reloading.

One of the police patrolling the rooftops to find the Scorpio killer is seen using what appears to be a standard Winchester Model 70 in .30-06.

The Scorpio Killer (Andrew Robinson) uses an 7.7mm Arisaka Type 02 Paratrooper Takedown rifle as his weapon of choice to kill random people in San Francisco. The rifle is fitted with a Hiram Maxim 1900's style suppressor, and rechambered in .30-06. The rifle is also placed in a sporting style stock.

(Note: Many Arisaka Battle rifles were 'sporterized' in the decades after World War II. For several decades after WW2, the Arisaka rifle was cheap and had no collector value. The value of the Imperial weapons skyrocketed in the 1990s. It is ironic that someone sporterized a 7.7mm paratrooper take down rifle, since now it is one of the rarest and most valuable battle rifles of World War II. An unmodified version is worth thousands of dollars. The sporterized version as seen in the movie is relatively worthless from a collector standpoint).

Arisaka Type 2 Paratrooper Takedown rifle - 7.7x58mm. This is the base rifle for the sporterized take down rifle.

Close up of the Sniper Rifle's suppressor.

Scorpio takes aim at a woman swimming on a distant roof top.

Close up of the bolt and trigger guard.

Scorpio fixes a suppressor to the rifle.

Scorpio locks the barrel to the receiver.

Scorpio takes aim with the rifle.

The rifle in the District Attorney's office. Harry acquires this firearm in a warrantless search. As such, they claim the gun gives no aid to the case, since it is inadmissible as evidence ("fruit of the poisonous tree"). On another note, if the rifle is a foreign Curio Relic 'bring back gun' from the war, that was later sporterized, it can also have no paper trail at all.

Evidence: the spent rifle round

Callahan finds a "thirty-ought-six" shell casing on the roof. When snipers use bolt action guns, they usually don't eject the spent shell and reveal crucial ballistic evidence, although it is assumed he leaves the shell casing intentionally as a taunt to the police.

When Harry Callahan (Clint Eastwood) and Chico Gonzalez (Reni Santoni) are getting outfitted with hidden microphones to deliver the ransom money to Scorpio, an Arisaka Type 38 can be seen hanging on the wall.

An Arisaka Type 38 on a wall behind Chico. Most likely a bring back from WWII.

The Scorpio Killer (Andrew Robinson) carries an MP40 submachine gun in the same rifle case as his sniper rifle, along with some spare magazines. He uses it to shoot at Insp. Callahan (Clint Eastwood) and Insp. Chico Gonzalez (Reni Santoni) during the shootout on the rooftops. Later he fires it at Insp. Gonzales during the fight at the base of the Mt. Davidson Cross.

An MP40 is seen in Scorpio's rifle case, along with spare magazines.

Scorpio fires his MP40 during the rooftop shootout, holding it sideways for some reason.

Scorpio runs across the rooftop armed with his MP40.

Scorpio reloads his MP40 while at the base of the Mt. Davidson Cross, but racks the action back and forth. People familiar with the weapon know it fires open bolt, so he either failed to pull the action back all the way, or held the trigger down as he pulled the action back.

The Bank Robber at the start of the film, being played by Albert Popwell (who would play four separate roles in the Dirty Harry series) wounds Insp. Callahan (Clint Eastwood) with a shot from his Winchester Model 12, but is disarmed during the famous "Do I feel lucky?" scene.

The punk's Winchester Model 12 out of reach.

Callahan picks up the Model 12, but not before showing the punk his gun was empty.