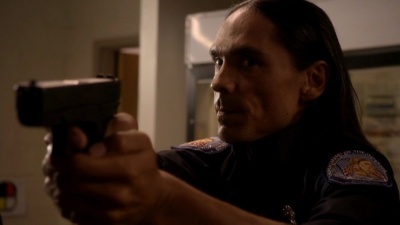 Zahn McClarnon with a Glock 19 as Officer Mathias in Longmire.

Zahn Tokiya-ku McClarnon is an American actor known for his performances in the Western crime drama series Longmire, the second season of Fargo as Hanzee Dent, and the second season of Westworld. In 2022 he plays Lt. Joe Leaphorn in the AMC series Dark Winds. McClarnon's mother is a Hunkpapa Lakota and his father is German-Irish descent.