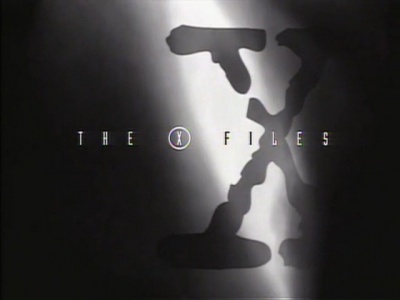 The X-Files is the science-fiction supernatural television series created by Chris Carter (Millennium, Harsh Realm) that starred David Duchovny and Gillian Anderson as Fox Mulder and Dana Scully - FBI agents who were placed in a special unofficial assignment known as the 'X-Files', in which they investigate cases associated with the paranormal. Mulder, a true believer, had high interest in such cases, most particularly (and personally) those involving evidence of the existence of extraterrestrial life. Concurrently, the cases also included other strange and unexplained phenomenon, with Mulder purporting generally wild theories. Scully - a doctor, scientist and skeptic - was originally to scrutinize and dismiss said findings and find more logical conclusions. In time, both learn to trust each other in their mutual search for the truth even as they clash with an insidious, far-reaching conspiracy meant to deny and cover up much of these acts. Late in the series, they are joined in their investigations by agents John Doggett (Robert Patrick) and Monica Reyes (Annabeth Gish). The series also stars Mitch Pileggi, Nicholas Lea, and William B. Davis.

The X-Files aired 202 episodes over 9 seasons on the FOX network from 1993 to 2002, making it the longest-running North American science-fiction television series until surpassed by Stargate SG-1. It was filmed in Vancouver, British Columbia for its first five seasons before moving production to Los Angeles, CA for its final four seasons. The show became a cult hit that would influence (directly and indirectly) several later shows, such as Buffy the Vampire Slayer, Fringe, Supernatural, and others. The X-Files is also notable for being one the earliest TV shows to have a strong internet presence (this in the considerably less popular, less saturated and more rudimentary early days of the internet). The series would also spawn two feature films: 1998's The X-Files: Fight the Future and 2008's The X-Files: I Want To Believe, as well as the 2001 spin-off series, The Lone Gunmen. The series Millennium (also created by Carter) was also set in this universe. Nearly a decade after the second film, The X-Files would return to television, first as a six-episode miniseries, which premiered on January 24th, 2016, which is officially listed as 'Season 10', then as a full 10 episode season as 'Season 11', beginning in January of 2018.

The following lists the original television series seasons, additional series and films of The X-Files: