The following weapons were used in the film Women of Mafia:

Several characters, including "Padrino" (Boguslaw Linda), are seen with a Beretta 92FS pistol.

Izabela "Bela" Konarska (Olga Boladz) carries a Glock 17 as her sidearm. Several mobsters and policemen also use this pistol.

One of mobsters fires a Glock 17.

Glock 17s are seen in the hands of some policemen.

"Cieniu" (Sebastian Fabijanski) has Bela put the gun to his head. 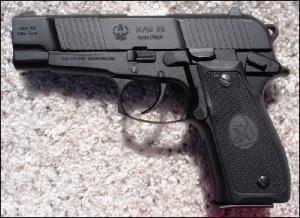 A member of the Polish SWAT is equipped with a Heckler & Koch HK416 A5 fitted with HKey mounting slots slim line handguard, optical sight and 11-inch barrel.